( the literature on hoarding may shed some light on the genesis, culture and outcomes of GTD – collecting to the point where some resource can no longer be used for its intended purpose )

I recommend that you check out Kourosh Dini’s setup, which he shares here and elsewhere: 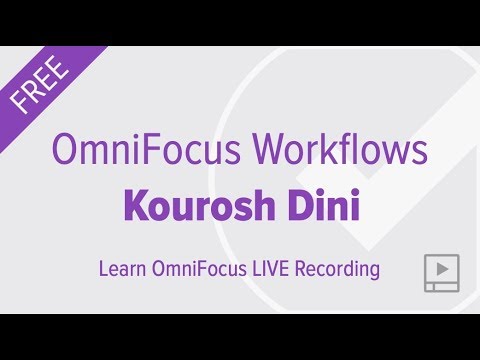 I’ve had a similar problem to yours in the past (overcomplicated system).

Some of the changes I’ve made, maybe useful to you.

In terms of procedure, it’s fairly simple, once again. Every week I do my weekly review and select all tasks that I must or should get done with a “Week” tag. I have a dedicated perspective for this. Having selected these tasks, I know that unless something shows up in the following days, these are the only ones I have to look into during the week. Then, I do a daily review of that Week Perspective and tag whatever task I feel should get done that day. When that’s done, I try to work from that Today Perspective only. If something comes up, I tag it with a “Today” tag when it has to get done during the present day or “Week” when I should do it the during the present week.

It’s a quite simple workflow, nothing fancy, but it’s nimble and more than enough. Hope that helps!

I also started over. I kept all the action items but removed all projects and tags and dates, then re-sorted them. I am retired so don’t have the work/personal divide. But I realized I wanted tasks sorted into recurring versus one-off. So “Home Inside Once” versus “Home Inside Recurring” really helped simplify and clarify.

For the rest I have three folders: Work, Private, Personal

I’ve got 2 single action lists, one for errandsa nd one for misc. I have an active projects folder, then these folders for recurring projects, Weekly, Monthly, Jan-Mar, Apr-Jun, Jul-Sep, Oct-Dec and one folder for checklists. No sub folders.

For me actually Pay electric bill is a project that recoccurs once a month. I have toset to autocomplete when I finish the last action and it has a start date for each month. It seems overkill an 90% of the itme I just check off the actions as I do a weekly review, I rarely actually use the project but in the event something happened tome, someone else could handle it. Mine has actions like waiting for electric bill notices (we have 4 different electric services all with different due dates) downloading the electric bills as searchable PDF files (we need them for tax reasons and they are not stored on-line for that long) verifying the autopayment has processed (we typically have 1 automatic payment a year go MIA due to bank errors and the electric company has no grace period for late payments or missed payments) I also verify tha the solar credits match what our solar panels have put into the grid. (again, this has been in error on occasion)

Similar to others. Folders but no subfolders – just easier to navigate. I use the same areas of focus folder structure as in my Documents folder on my Mac (Finances, Health, Travel, etc.). Each folder has a Miscellaneous single action list, and whatever other projects I create from time to time. Some projects have repeating tasks and I put those routine projects near the top under Misc. I use tags to create next action perspectives by location, showing first available task I can pick up.

I can’t thank you all enough for your valuable insight. I use my iPad 90% of the time and eliminating subfolders has helped me navigate much easier. I prefer the Mac interface but I don’t want to carry my MacBook Air around when my iPad works for everything else. Also, moving the single action tasks to separate projects has helped. I think my next challenge is looking at a Planning Perspective and a Today perspective. I feel like my Today perspective has too many unrealistic items that I simply won’t do.

I hope this thread helps others who feel the need to start over.
Thanks again!

oh gosh, OP, I feel like this post was made for me - only you had a wonderful way of putting it. I’m finding Kourosh’s approach helpful. But I wonder if it’s also the pace of life just now - I’ve never seen it this fast and furious, and I’m academic at a University - must be manic out there IRL. Between supporting students & colleagues in crisis, and so many collaborative projects, my own omnifocus tasks seem to constantly get bumped. Not at all GTD… best wishes with your new system. FWIW, I use a today tag and go to that tag each morning, so I can prioritise. I don’t seem to be able to set it as a perspective (someone please correct me if I’m wrong), but that would be a game changer for me.

A “Today” tag perspective is perfectly possible. What are you having trouble with? 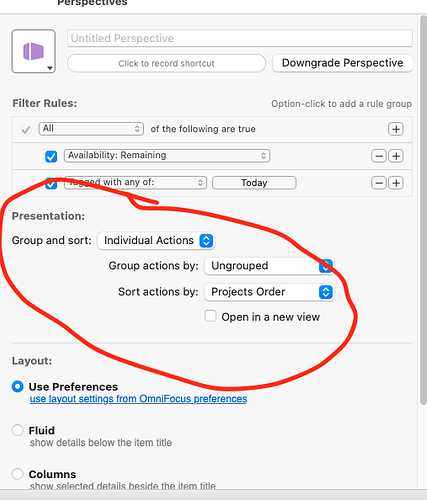 In my experience, that situation usually results from not clearing my inbox regularly and not reviewing my projects often enough. It can be hard to work a regular review into your routine, but for me, it’s essential. I set review intervals for each project according to what makes the most sense: weekly for most, more often if deadlines are approaching, less often if they are active but not yet in need of sustained attention.

I also find that it’s important not to overly complicate my setup. I’ve been using OF since the alpha testing days in 2007, after using Kinkless GTD for a while, and while I understand the move from contexts to tags, I try to keep Occam’s razor at hand: no more perspectives or tags than absolutely necessary to achieve my goals.

Collection isn’t a fallacy, at least not for me. If I have an idea that I can’t act on immediately, I put it in my inbox so I can let it go for the moment. That doesn’t mean I’ll keep it, though. The GTD processing scheme is useful, but there’s one tweak I would make:

The first question on processing an inbox item is: Is it actionable? The GTD workflow states that if it is, you should choose one of these three: do, delegate, or defer. If not, it should be trashed, filed as reference, or added to a someday/maybe list.

I would amend that question to the following: Is it actionable and worth acting on? I get some odd ideas that after a few minutes’ consideration turn out to be not worth it, at least not any time soon. I delete them or put them in a separate file I check a couple times a year. That keeps my OF list from being clogged with things that I’m not realistically going to do any time soon, if ever, and thus makes the review process manageable.

Unless you are truly your own boss and answer to no one, you can’t always say no, even when there is too much to do (and who has only one central goal?). Ideally, your OF database is a record of your current commitments, either to yourself or to other people who have a claim on your time and attention. If there’s too much on it and you have already said no to everything you can, then it becomes a tool to bring to your boss (using the term loosely) so you can renegotiate some of the items on it, by dropping them, handing them off to someone else, or getting an assistant.

What I think @Andre.Sena is referring to is the possibility in the Forecast View options to set a tag to be shown there, which could be an alternative for you.

I think the organization of the tasks, flags, tags, makes my Today perspective
unimaginable. I think reorganizing and cleaning up my system will make it better.

I started feeling this way not too long ago, I was in the middle of moving and my “today” perspective wasn’t reflective of what I really needed to do and I was starting to feel stressed and scrambled (I imagine the move was also to blame…) Here’s a couple of tips that may help:

Have some sort of “emergency” or “top priority” system. For me, this is the flags. The only things that get flagged are the things I’m going to do THAT DAY. For you, this could be a perspective that only shows a special tag like “!!!”

The other thing is I have a small handful of tags that I use to organize priorities, nearly everything gets tagged with one of these (basically the only things that don’t are groceries) My tags, in order of most to least important are:
Work - Hard Obligations - Personal Projects - Soft Obligations - Proactive - Small Things

When planning out my day, I try to get something done from each category (that way something from small things doesn’t become a hard obligation)

In addition to liberal use of saying “no” and deleting/dropping tasks, I’m also pretty frequent with my use of “deferring” - if it’s not something I’m going to be doing within the next couple of weeks, I defer it so it doesn’t distract me from the things that I am going to be doing.

Hopefully one of these is helpful! Just my 2¢, best of luck with the bankruptcy! I’m enjoying reading the other responses and getting some ideas!

On top of @DrJJWMac’s tips. Use the Review process religiously at least once a week, then everything will pass your view sooner or later (dependent on how often you set your projects to be reviewed.

This is reason that I’ve never made any other system stick. The Review feature in OF is priceless.

Use the Review process religiously at least once a week,

If you stagger the review dates on projects, you are likely forced to review something nearly every day. I try to take this approach:

As I am out walking the dog in the early morning, I take the time to review for next steps in my OF workflow while my dog reviews diligently for even the smallest of food scraps on the ground. 🐶