Hi, I’ve recently started using Due on iOS for certain small types of task that I don’t need to be in my trusted system (well, it works for me… ;-) ) - occasionally I later decide that I’d like to handle it in OF instead. In Due I can use the share sheet to get it in to OF but OF doesn’t pick up the due date - it gets included in the notes field.

I wonder if it would be possible to make OF recognise this info? (or indeed pick up on text that seems to imply a due date from any pasted source?)

I don’t know for sure, but I would hypothesize that the data formats between the two apps aren’t compatible.

I don’t have Due, but I wonder if maybe Workflow could be used to get the due date and then put everything in an OF or TaskPaper format for OF to ingest.

When you use the share sheet from Due, if you to share to, say, plain text, does Due pass the due date information?What information Due shares when invoking the share sheet is certainly the key in determining what all can be parsed and used.

Hi there - yes I cold have been clearer!
OK the due date gets added in to the notes field. Let me see if I can share some shots:

This is the item in due: note due date and title 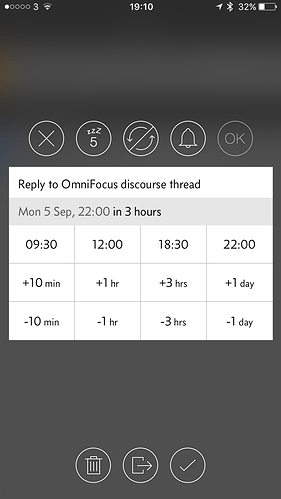 This is the resulting item in OF - only the title and this note field come across. 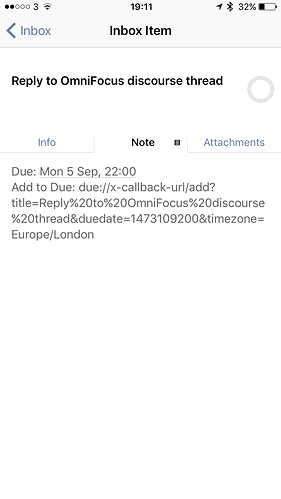 I was wondering if OF could be made to recognise the format “Due:…” as part of a future release?

What if you export the Due task to Reminders. Does it work?
If yes, you could set OmniFocus to capture the task from there? (as OmniFocus does import due dates right from Reminders).
Just a workaround. Just a quick thought — haven’t tried myself (:

Just tried it and it seems that Reminders isn’t an export option. :-(

Just to see what would happen I used the ‘create calendar event’ export option and that does pick up on the due time as the event time, so it must just spot the 'Due: …" syntax

Workflow can definitely be the solution here: Due to OmniFocus. I decided to skip adding the URL as I thought you’d likely delete the Due task.

Thank you so much - it’s late here, I’ll try that out in the morning.

I’ve never really got to grips with Workflow - can anyone recommend any tips for learning how to do something like this from scratch myself?

No problem! I posted the following on Reddit a few times, in the Workflow SubReddit (another great resource):

You’re a star - many thanks