Getting Project Name from Quick Entry

a Project folder that is selected in the Quick Entry dialog box.

Could you post a screenshot and give an example? If this is possible, maybe I can help.

Here is an example: I use the AppleScript ClipOTron in email to capture follow ups. My workflow would be to:

Ok, I think I understand. One question:

offer to file the email under a folder of the same name as the project.

A folder in the Finder, Mail or OmniFocus?

I want to file away the original email. The Omnifocus task is going into the right place.

It was a little complex, but I think it would help.
Try this code.

So I was able to invoke this script manually in Script Editor after first using the AppleScript version of the ClipOTron script (which you helped me earlier with) I made a small adjustment to how it was searching for the email to be filed. I think I was getting timeouts with the original. I changed this to :

This constrained this to the current message viewer window. Most likely this isn’t going to change as I’m kicking off the script from here.

So now that I got this working, I’m trying to tie this together. Is there a way to kick off this script or set of actions after you hit Save in the Quick Entry. So series of actions go like this:

I don’t think there is a way to throw this logic in but thought I’d ask.

I thought about this because, if you don’t have mail running, it would throw an error. But, if you have a lot of mails, searching would be slow.

I’m trying to tie this together. Is there a way to kick off this script or set of actions after you hit Save in the Quick Entry. So series of actions go like this:
This script saves the Quick Entry dialog. You can’t program the Save button to trigger a Script. Is that what you mean?

Select email and run the ClipOTron AppleScript
Fill in the Project/Context/Dates in Quick Entry.
Hit Save button in Quick Entry which then runs this script above.

This script saves the Quick Entry dialog. You can’t program the Save button to trigger a Script. Is that what you mean?

Could you post the script that creates a folder if it doesn’t exist? I could take a look.

To make the folder example simple, this is simply a create sub-folder script. I have the check part working correctly. Basically, this should create a sub-folder Target in the folder Inbox/Reference Material. I included the Event dialog box for when it is run. For some reason it doubles up on the Inbox/Reference Material. Just change below w/Name of your email account that you want to test. 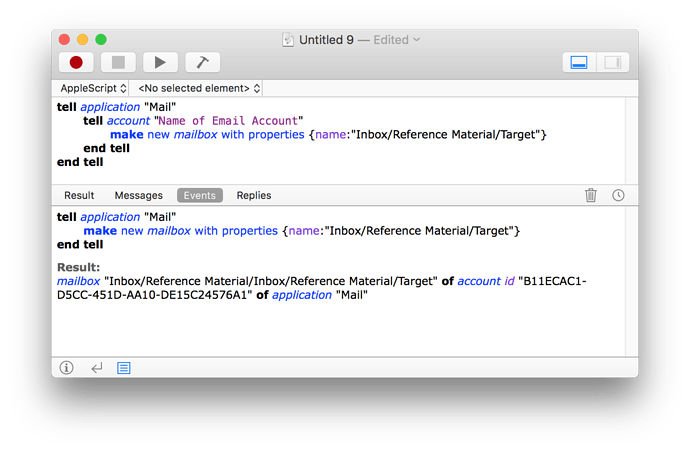 I can’t replicate your behaviour because I don’t have an Exchange account. In my case, your script creates the desired hierarchy. But you can try this workaround; the problem is that the new folder takes awhile to appear.

Tell me if you need anything else.

Thx. There definitely seems to be something unusual about how an Exchange account works w/this. This works fine on a different computer w/Gmail. I’ve seen this issue pop up on the Apple forums but didn’t see any resolutions. I’ll keep playing w/this. Thanks again.

There definitely seems to be something unusual about how an Exchange account works w/this.

I couldn’t test it, but it seems to be the case.
You’re welcome, MikeA.