How to make a flagged + deferred + due perspective?

I’m trying to make a custom perspective that allows me to see everything deferred or due on a certain date, as well as everything that is flagged. Actually, a perspective that could do this is the sole reason I picked up the pro upgrade. Would anyone be able to help guide me towards how to get this result? I got 2/3 of the way there from the forecast perspective, I just needed to combine flagged in with it. Struggling to find a way to do this.

@heyhler Certainly can, I have such a perspective ready to go! Try this…

So this is what I’m getting with the recommended perspective: 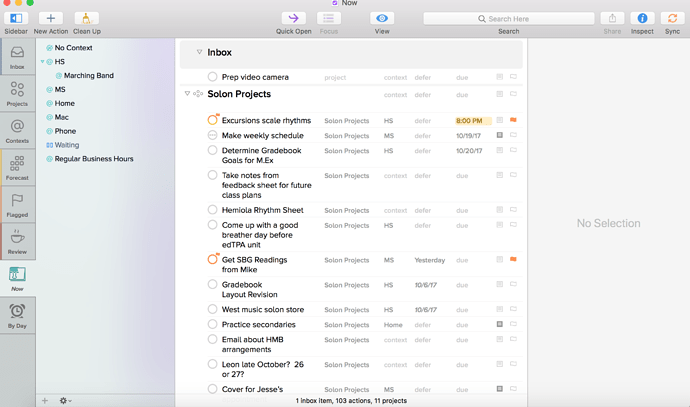 The first problem (based on how I organize projects), is the project grouping. I’m also getting due, deferred, & flagged items showing, but I’d like to ONLY see these items. There aren’t perspective options to really facilitate a combination of due and deferred the way Forecast naturally can, unless I’m missing it. The following settings are working a little better for me, but it’d be nice if I could sort by due or deferred rather than one or the other. 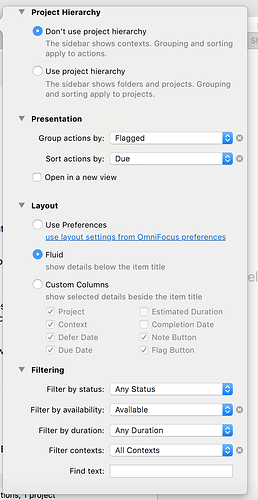 The view I’m getting with this is 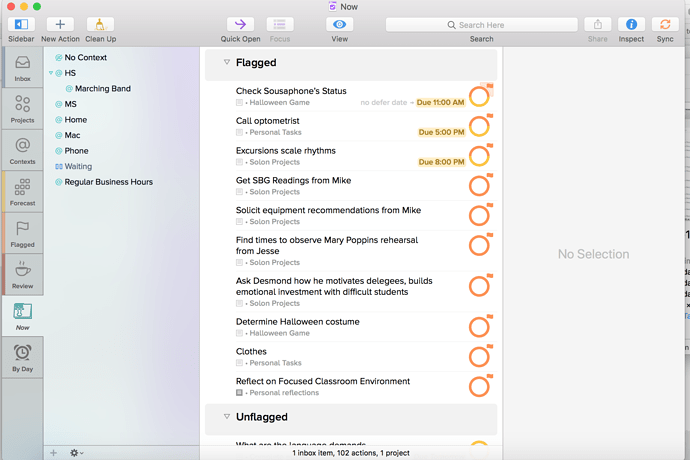 Is there a way to set secondary sorting? I didn’t really trial the feature, I assumed it’d be more extensive.

If you want due, deferred and flagged for a single date, no, it’s not possible at present.

OmniFocus isn’t really a scheduled, temporal system. (If I defer something to tomorrow, it doesn’t mean that I’m doing it tomorrow, but that I can do.) Rather, it’s centred around contexts. (Here I am in the classroom with free time, what can I get done?)

But that would require the deferred tasks to have either flags or due dates, doesn’t it? I have settled with a separate perspective for deferred tasks, and have come to prefer that solution.

Yes, of course! Apparently I was feeling rather inventive and optimistic this morning.

Yeah, for a while I was quite impressed!

OmniFocus isn’t really a scheduled, temporal system. (If I defer something to tomorrow, it doesn’t mean that I’m doing it tomorrow, but that I can do.) Rather, it’s centred around contexts. (Here I am in the classroom with free time, what can I get done?)

I guess I’m just trying to milk more schedule out of it. Normally when I defer something, it’s because I can take care of it that day. But I’ve thrown everything in as a sort of brain dump, that things that are time sensitive are hard to keep track of, and I’m trying to use Forecast for that, but I feel like it can be improved beyond that. I’m trying to flag things I want to handle in a given day, but checking forecast to flag things, and then checking my flags separately to see what I’ve picked out feels like too many extra steps.

For what it’s worth, this is achievable in the Today pane. I just wish I could have the same thing as a perspective itself to use within the actual app.