Is this a normal statistic?

Is this considered normal statistics for OF usage? Mobile version often become sluggish so I consider it is possible that I am not using app correctly. Should I use other solution to manage my projects?
Currently at executive level 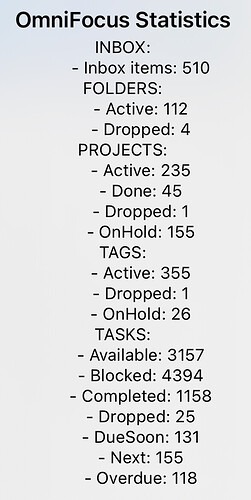 Any other suggestions, risks and opportunities?

Tried Jira, Trello, paper etc but currently OmniFocus with tags is best fit to manage my whole life. But maybe I’m creating some bottlenecks for myself. My operations are grown 2x recently and I plan to grow 10-100x and eventually attain status of UHNWI - maybe I need to abandon current life management system to not limit my growth

Any suggestions and ideas?

I even thought about programming my own system, but maybe that’s not a good idea from perspective of leveraging time and money.

Tried to have executive assistant to delegate mundane tasks but sometimes they create more hassle than help to organize so I retain my full system in parallel to make sure nothing “slits into cracks”. Maybe that’s partially to some FOMO and wanting to control everything in my life and future

It looks pretty reasonable. What device is causing a slowdown? If it’s an iPhone or iPad, a bad battery can cause overall performance to drop. I think there was some controversy about Apple throttling down IPhone CPU performance in an effort to en extend battery life?

Maybe archiving old data would help? Of course, it’s a Mac only feature but maybe it’s worth a shot? I personally don’t refer to projects that are over 3 months old (1 quarter) and I just archive. If I need to refer to something, I can return back to my Mac to check something. Otherwise I haven’t found a need to look back at something more than 3 months ago. You might set your own threshold to archive completed tasks that are over 6 months old or 1 year old?

creating some bottlenecks for myself

Not using the trash-can nearly enough.

It’s an absolutely endemic anti-pattern – a kind of hoarding – caused by the “collect it all” ideology.

“discard most of it” and “discard anything not on your route” works much better.

You may want to try using the archive function on macOS to get rid of some of those completed items. But aside from that suggestion the usage looks normal to me!

One thing that can slow sync down a lot is devices which are offline due to infrequent use. The sync has to keep everything on hand until that device has synced in order to bring it up to date.

Looks like a pretty light workload to me. (consulting CEO) :)

So a couple of suggestions. First, 510 inbox items seems pretty high for a day or two. Ideally, try and make time to process your inbox every night so it doesn’t build up. That may mean moving things to a project, which you seem to have a lot of, or to an appropriate single action list (I have single action lists for work, personal, home, and several other responsibilities) and tagging them appropriately so they come up in the right perspectives to get done. Leaving things in the inbox forever, especially if they aren’t tagged, will make it hard to find things and make it likely that you either work the oldest or newest items first, rather than the ‘right’ ones.

Second, consider setting up a Someday section, and moving anything that isn’t actually active there. Maybe that’s what you’re using ‘on hold’ for. You have 235 active projects and over 3K available tasks. You probably aren’t actually working on 235 distinct projects this week, and there’s no way you’ll complete 3,000 tasks. What I do is leave the projects I plan to actively work this week on in my normal projects folder, and move the rest to Someday. Every Friday afternoon, the last thing I do before stopping work for the day is to review all my active and Someday projects and move them as needed, so I have what I can actually do next week active. That keeps the list of projects from being overwhelming, and I’m focused on the things I’ve decided need to get done that week. The review process is the key to this though. If you don’t do it frequently, you might forget about pending projects that you should be working on.

Finally, come up with a workflow that makes sense for the kind of work you do. If this is mostly your work, then laying it out in OF makes sense. But if, in your executive role, this is mostly managing other peoples’ work, you might consider using an actual project management system to do that, with OF tracking your tasks. So for example, you might put ‘Meet with Bob to review status of Acme project’ in OmniFocus, but not the 28 tasks in that project that Bob and his team are responsible for’.