I have written some notes on some of my objects. I would like to see the note next to the label all the time. Ie when it’s open as a document, or printed. As it is now you have to hover the mouse over the object to see the note.

If not, how do you create notes that are visible all the time (I’m using Auto Layout, otherwise it would be quite simple of course)?

Rough first sketch of a script which creates/updates a ‘visible notes’ layer on top of a diagram.

(When the script is run, it updates the contents and position of a set of note shapes (creating them if they do not yet exist), which match the position and notes field text contents of shapes in the diagram below).

Can be run in between Auto-Layout repositioning, and will move notes to follow their base shapes, but needs Auto-Layout to be switched off.

(Paste into Script Editor, and choose JavaScript from the language selector at top left, before running)

All Rube Goldberg or Heath Robinson territory, of course :-) This should really be built into the app.

PS to adjust the formatting of the edges, shadows, shades etc of the note shapes, you can select a shape that is manually formatted to the style you want, and then inspect the JavaScript for Automation encoding of the various properties by looking at the Result panel output of a script like this: 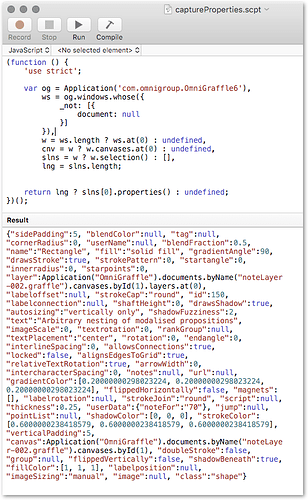 Update: a slightly more ambitious version, allowing a workflow in which diagram notes can be edited in the display text of their linked notation-layer visible satellites, with and texts edits synced back to the note fields of the diagram shape when the script is run.

Test it before you use it, and make sure that you can see the limits of the very simple sync that it does:

the script keeps an additional (third) copy of the diagram note text in the note field of the satellite shape.

This gives a triangle of texts, with 3 edges of possible difference.

You should be able to edit the note text, between script runs, either:

but you should of course, try not to edit the same in two different places between script runs.

If you can develop this using a single occurrence of the Notes, in the satellite only, rather than three occs, it would be very useful.

The source is there …

I have written some notes on some of my objects. I would like to see the note next to the label all the time. Ie when it’s open as a document, or printed. As it is now you have to hover the mouse over the object to see the note.

It is two different things.

Yes it is, once you understand the above.

There are a few different ways you can get what you want … it depends on precisely what you want, how you wish the text object to appear “next” to the object, whether Auto-Layout is to be used; etc. Here is one, this works with Auto-Layout (eg. left-to-right) in mind.

This should really be built into the app.

If it excludes duplicated text, yes.

As is, definitely not.

The source is there …

Thank you for the opportunity.

From my perspective, I would never publish something that is a mass of duplication, because that breaks one of the cardinal rules of handling data, as well as of software design. So if I did publish something aloing these lines, I would design it and build it within those engineering standards. It is a great idea, but as it stands, it is unusable, sub-standard, non-compliant. It is at the prototype level, not at the publication level. So really, the opportunity is for you, the initial designer, to note its utility, from the comments here, to bring it up to standard, and publish it.

I am too busy with other projects. And OG Notes work just fine for me, within the existing scope. If and when a decent satellite Notes facility becomes available, I would use it.

Not sure that what you suggest is feasible, given the structure of the OG object model.

But if you want to experiment, go for it !

(I would be more than delighted to be proved wrong :-)

(I would be more than delighted to be proved wrong :-)

… given the structure of the OG object model.

The notion of simple but good-looking diagrams is partly Apple’s dictum, implemented in OSX and therefore partly Apple’s insanity. The idea of reducing OSX products down to the capability of iOS is backward and short-sighted, not surprising, given the schizophrenic CEO. The days of Steve Jobs are long gone.

But as far as OG is concerned, they simply do not appreciate the power of the product, and its utility. They do not have a long-term perspective or goal. OG just “progresses” in fits and starts, servile to OSX changes (fits and starts) and to the users who scream the loudest.

Second, OF and other products have taken over the front stage, and OG is severely neglected.

Instead of the above, we have a flat file with massive duplication, and all the problems that are consequent to the absence of Database implementation, the absence of Structure; etc

From an OG5 diagram such as this:

… with a few key strokes, I produce these:

(For completeness, the PDF with Export/IncludeNotes is:

I trust you can imagine that I do something along the same lines using SVG for websites.

The problem is, the whole exercise is fraught with problems, due to the absence of a Database, of Structure.

Therefore, granted, OG has no structure, no database, and therefore the objects are difficult to deal with beyond their simplistic initial scope. From the example provided, I trust you can see, sure, it can be done, but it is severely hindered.

Not sure that what you suggest is feasible

The notion you have for Notes/Satellites is an excellent idea. But it must be implemented, to work within those imposed parameters, and without either adding more duplication (and therefore more problems) or maintaining the products duplication (and therefore maintaining the current problems). It must be implemented without duplication. Here you have three copies of the Notes text. That is one original plus two duplicates. If you can implement it such that:

To be clear, when using your Extension, for each Extended Note, there will be one Satellite file that is dependent on the OG diagram file, in the same directory, named something like:

Then you will have a serious, feasible, Notes Extension.

Again, if Omni had a long-term product focus, if they appreciated the power of OG, this feature would be a part of the product, not an Extension by an advanced user. The notion of a central diagram, plus satellite diagrams, would raise the product up to the level required for serious use, to the level of a Design Tool (rather than a mere drawing tool), such as:

TLDR, I’m afraid, but I do recommend George Steiner’s Real Presences, which argues well that valuable commentary is always in the same mode as the object of comment.

Derived, modified or alternative code is always useful, or at the very least, interesting.

TLDR, I’m afraid, [/quote]
Fair enough. It requires an attention span. It contains the whole argument, in one piece, such that the developers can use it. Rather than two pieces: a text bite for OO and 8O types; and another for those with an attention span.

but I do recommend George Steiner’s Real Presences, which argues well that valuable commentary is always in the same mode as the object of comment.

Yes. We’ve had that since the 1960’s. Unfortunately it is not commonly known in IT these days, and it should be. If you had read my post, you might have found that I apply that.

[quote]Derived, modified or alternative code is always useful, or at the very least, interesting.

No idea what you mean by that, or how it applies here.

Attention is a precious resource - people spend it when the deal looks good.

The only useful commentary on code is more useful code - people would love to see code contributed by a guru, but they may not, I fear, devote much attention to long screeds in English :-(

Attention is a precious resource - people spend it when the deal looks good.

True. One can spend only what one has.

The only useful commentary on code is more useful code

Evidently you have a private definition for “commentary”. I would accept that:

but the notion of:

is quite absurd. Humans have five senses and an intellect. We are not limited to reading code; and only code; so help me code, we can read other things, we can understand drawings, etc.

Further, it implies that the initial code is useful. It isn’t.

The realm of Architecture & Design is above the realm of code. Once one gets familiar with that, one’s code improves, drastically, it exists in two realms. It eliminates the code-and-keep-changing-code that coders are used to. One achieves the position where one can code-once-and-forget. Learning Architecture & Design does, however, require an attention span. A fair amount of reading and diagramming is involved.

[quote]people would love to see code contributed by a guru, but they may not, I fear, devote much attention to long screeds in English
[/quote]
Not people, coders. The notion that you speak for people is too hilarious to respond to.

People, who have knowledge of all the aspects of software implementation, who are not limited to a code-is-God context, can read articles in English. Therefore they code better. They Normalise their code. Their code does not get thrown out and replaced or “refactored” every month. Designed code has a much smaller footprint than coders’ code, and runs hundreds of times faster.

Eg. you have coded and published a Note script that is not useful to me, for several reasons (duplication being just one). No doubt it is useful to others, but I cannot speak for others. I have defined what a useful Note Extension would be. But you can’t read about what would make your code useful. You want me code from your code.

Derived, modified or alternative code is always useful, or at the very least, interesting.

Only if the initial code is useful.

I gave an example of the problem, and the solution, the code for which most people find interesting. You can’t even figure out the code (object-centric or otherwise) that is required to produce this from this.

I would give you the code, but:

So I better not, for three reasons.

I would recommend Kruger & Dunning’s papers on metacognitive skills. Not surprisingly, the creatures that pass for “scientists” these days attacked it, so they performed a second study that focussed on the “issues” raised, and ended up confirming their initial findings. If you can’t find them on the internet, they are here: paper 1; paper 2.

They are essential reading for anyone in IT, especially these days, with so many people who have just one tool in the toolbox (if all you have is a hammer, everything looks like a nail - Abraham Maslow in Law of the Instrument ).

If you find those interesting, let me know, I have a couple more that might interest you.