Finally, a chance to preview OmniFocus 3 for the Mac TestFlight.

I spent the last couple of days browsing around and seeing what’s changed. If there’s something I missed, ask away and I’ll see if I can find something.

These screenshots are not representative of the final product. It is still in TestFlight status. Features and appearances may change in the final Version 3.0 release.

As with any TestFlight software, please backup your OmniFocus database or test it out with a brand new database.

Helping individuals and companies be better at remote work

More invitations will be coming out very soon. Sign up at the TestFlight page to get a build-in-progress.

The quote from the TestFlight untested build software

Not for the faint of heart! These unstable and untested builds are snapshots of our development, updated every few hours. This means that you might actually be the first person to try a particular build and discover that something is very wrong. (We hope that doesn’t happen, of course, but since we won’t have tested the app before giving you access we can’t make any guarantees.)

Is there TouchBar support?

Keep in mind it’s not feature complete, but there’s not support for the Touch Bar. It may be planned but I’m not sure.

If you haven’t already, send in ideas for how you’d like it implemented to omnifocus@omnigroup.com.

No TouchBar support yet. THere’s still some work to do. I don’t have the ability to add custom perspectives to my toolbar at the top of the window. I’d imagine that would be added first before Touch Bar.

If only Apple would just release a wireless keyboard with a touch bar. But I wonder how much battery juice that would suck up. Not having a wireless Touch Bar keyboard limits Touch Bar adoption to those who bought MacBook Pros.

Oops. Forgot to add the perspectives settings screen. You’ll find this in the OF3 for iOS app as well. 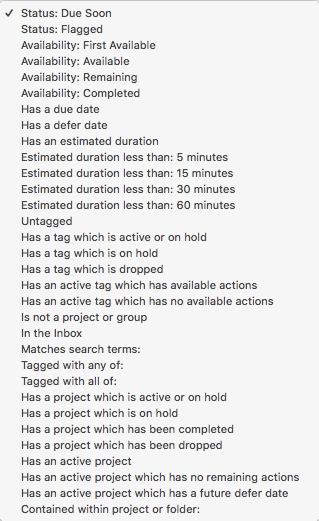 You can use these in combination with:

You can make nested conditions with any combination of these. For example:

Look for active projects that are not in particular folders and have estimated duration not less than 15 minutes. That’s a perspective that would have been harder to do in OF2.

Still surprising you can’t base a perspective on absolute or relative dates,

I think the focus right now is getting in all the features we’ve got in the iOS version. Even more advanced perspective options would likely come in later point releases, after those items already on the 2018 roadmap. Again, mail in your feature requests to make sure your interest is recorded.

Will there be a major redesign before version 3 is published or should we expect it to look pretty much like this until version 4? I think OF2 looks very old now, and the screenshots from version 3 so far don’t change that much from what I can see. It’s not that big of a deal, but it sure would help when you use OF a lot.

I suppose Things 3 has spoiled us when it comes to design, it would be nice if OF could improve under this aspect too.

I would not expect major changes to the aesthetics before release. Some tweaking of fonts, colours and relative frame sizes is possible, but not a fundamental rethink. I think this version is all about functions and features.

Where is the best place to post a comment / request for Omnifocus 3 for Mac test flight? I’ll post here, but please let me know if there is a more appropriate thread.

In forecast view, it would be immensely helpful if subtasks would show up collapsable under its task instead of individually. For instance, looking at today there are 27 items appearing in seemingly random order, but in actuality there are really only about 6 tasks; the rest are just subtasks under those main tasks. The subtasks do not seem to appear directly under their tasks, nor is there a side triangle to be able to collapse them.

This small issue is bogging down my productivity to the point that I’m considering listing subtasks in the notes section instead :(

Thanks for your time. Any suggestions would be appreciated.

The way action groups are, they aren’t really a hierarchical relationship. More, it’s like a task with predecessors. This is why the one that is at the top in project perspectives is at the bottom in Forecast: they can’t be done until their predecessors are done first. This is also why there aren’t disclosure triangles; they don’t work like projects do.

It sounds like maybe you’d be better off using multiple projects to organize with the current way things work? Again, contacting Omni directly by email is the best way to share your thoughts with them.

Thanks for the response; I appreciate it.

So it sounds like it was this way in Omnifocus 2 as well…? I supposed I rarely used the Forecast perspective and worked mostly from the project lists (and flags).

Yup, it’s been this way for some time, and I agree, I’m pretty new to using the Forecast perspective a lot myself.

One thing I have found interesting is that in this scenario, if you use Forecast Tags instead of due dates to have action groups appear in Forecast, blocked actions (i.e. the top of the action group hierarchy) won’t show up until they are unblocked by their predecessors. This can help as a way to manage what is visible when, perhaps.