Hi folks.
I’m new to the forums and to using scripts but have been using OF for years. I have a script that is working fine. The Daily Maintenance script that flags anything with a defer date that is today.
I was successfully using Curt Clifton’s Populate Template Placeholders script http://curtclifton.net/poptemp for a few days but now it no longer works. It is a HUGE time saver for me. I’ve removed it from the toolbar, deleted the script from the script folder, re-downloaded it but it still won’t work. The project template is use it with has not changed at all from when I was using it successfully. Any ideas why this might not be working?
When I try to use it it says The Project «Client« Does not contain any information to populate and then says it doesn’t have placeholders which it of course does have all through the project. It worked fine previously. Any idea how I can fix this?
Thanks

Hi.
No idea why it’s not working. I’ve used this for quite a while, but… stopped long ago when Chris Sauvé published his version (inspired by @curt).

I was surprised now to see cmsauve.com seems to be down, but you still can find his version on github here:
https://github.com/lemonmade/templates

I strongly recommend, as it brings some very useful functionality on top of Curt’s implementation.

It sounds like the note of the template project got mangled somehow.

The instructions for using the script, posted here, say this about the note:

Next, list all of the placeholders in the last line of the note field of the project. In the example, you’ll see “«ConferenceName» «ConferenceCity»”. This allows the script to determine what values to prompt you for.

The error message you’re seeing indicates that the script isn’t finding the list of placeholders.

If you do have the placeholders in the note, maybe something else about the note is confusing the script. If you’re willing to post the note, or even a screenshot of the whole project, I’m sure we could sort this out. Of course, I understand if the template is sensitive information and sharing it isn’t possible.

I guess I changed something in the note at some point but have since added the placeholder back at the bottom. Here’s a screen shot 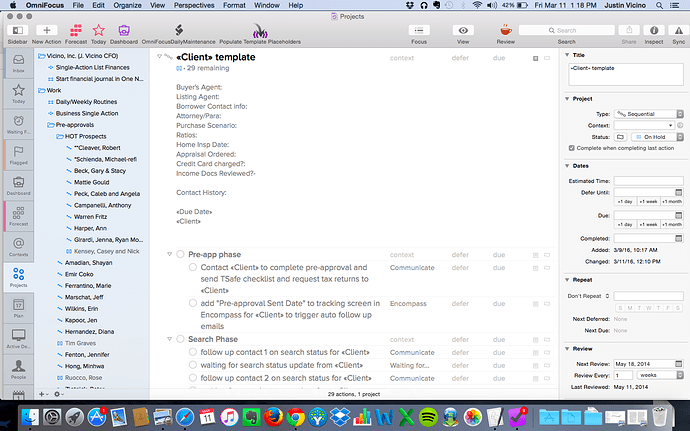