I know Omni seems to want to spend their time on important issues like, uh, making dark mode prettier, but for some of us, one of the defining “features” of OF is the ability to have multiple levels of nested tasks. When you cannot collapse or do anything useful with action groups on two of the three platforms, it kind of negates that ability. Is there any relief on the horizon, or should we be spending our time figuring out the best way to export information from OF into another task manager at this point?

(if it sounds like I’m frustrated, that’s only because I am. This is ridiculous.)

I am not sure I understand, becauseI can see all items under a tag, in nested structure, on all iOS and macOS devices.

Can you explain a little bit more?

You cannot collapse nested tasks, so having them in a project makes the project very unwieldy to view on a mobile device. Furthermore, it’s very fiddly trying to add new tasks into nested tasks, especially if you have multiple levels of nesting. There are no keyboard shortcuts to make it easier to manage said tasks, either. As a result, it actually makes the user experience significantly worse when trying to use action groups on iOS — I’ve taken to using flat projects instead, but that rapidly becomes unwieldy with the kind of software development projects that I use OF for. A single project will often have dozens of tasks that I need to be able to see under some circumstances but which should be hidden or put on indefinite pause for my day to day use.

Yes, it’s why I don’t use nested tasks right now.

I really want this too, but I’ve found that with the new iPad beta version you can have two windows open side by side of the same projects and drag tasks between windows effectively reorganizing the same project. This has really helped me.

Same for me as I yet wrote in my post about my OmniFocus UX Struggles.
Especially seeing them all in the wrong order and not collapsed in Forecast View or own perspectives makes using action groups nearly useless.
And I don’t want to have an own project for my travel packing list and so on.
I’ve just created an example action group in my OmniFocus Project and this is how it looks on iOS in Project View 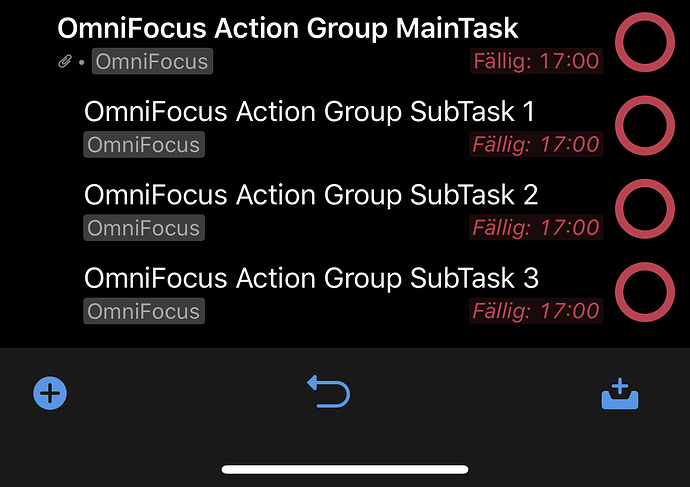 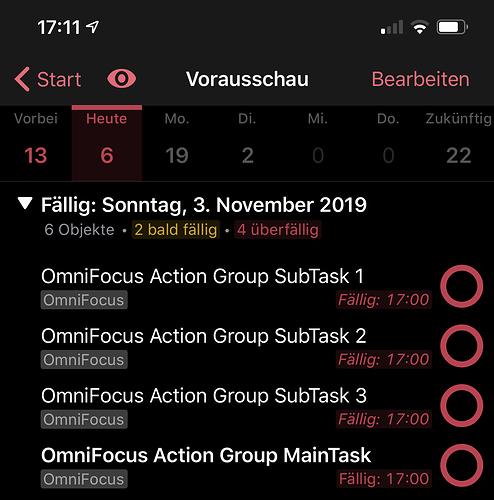 Why is the MainTask below and why can’t we collapse the Action Group please?

In my own Today perspective the MainTask is completely missing!

Can we get a feature request in for this somehow??

Can we get a feature request in for this somehow??

Well, we have one, since a long time… And this is what @kcase from The Omni Group said about it in December 2018:

But, yes, as mentioned above: we’ve always wanted to add expandable groups as well. This year, we happened to have been focused on other long-requested features, like tags and improved repeat options and custom notifications and more flexible filter rules for perspectives. With those huge features having shipped, we look forward to implementing even more features, like powerful automation and collaboration and floating time zone support. And, yes, collapsible action groups.

But there always seems to be other new features getting higher prioritized from The Omni Group, either introduced by the company itself or to make use of new system features from Apple…

There is always the option not to use the forecast view which reading this seems to me it should be more accurately “can we improve the forecast view?”… If you use a custom perspective you can specify “is not a project or group” does that not solve most of these issues?

Conversely I guess you could just show groups in a perspective, not the sub tasks, not tried this but should be possible, may be wrong…

Personally I think expecting any app on a phone to be anything but fiddly is asking a lot and the more complex the app the fiddler it becomes. I use the inbox for quick task additions and just sort it out on the iPad or Mac a couple of times a day. I also use nested groups as simple headings, the parent task is pretty irrelevant on its’ own such as “Complete coding work on xyz page” it auto completes on last action and is really there just as a logical breakdown.

Would I like actual headings? Yes maybe, but `I get on fine the way things are.

There are plenty of excellent task managers available for iOS, we are long past the point at which any mobile app should be expected to be fiddly. Also, when you’ve paid for the same application multiple times, you kind of expect it to improve over time.

So I decided to try this, and spent about ten minutes being a total idiot before coming back to the forum here and finding out that you’re running the beta. No wonder it didn’t work for me.

Of course phone apps are “fiddly” would you prefer to edit video on a phone or an iPad? same software completely different experience, and of course on a Mac it is even better.

The simple fact that the phone screen size is what it is meant that there is friction, seems to me a lot of time those that insist on using iOS and bending it to the point of breaking are more intent on proving a point that actually being productive. For example I spend a fair bit of time resizing, cropping and watermarking pictures, on a phone it is damn near impossible, on an iPad it is bearable but fiddly even with an Apple Pencil, on a Mac it is a few seconds simple job.

So no, I do not believe we are way past the point of iOS apps being fiddly and I doubt we will not be at that point for a long time. As too “has OF improved over time” of course it has, maybe not in the way you want or expected but that does not mean that is everyone’s perception.

Aside from compatibility with modern operating systems, I cannot readily come up with a way in which the current OmniFocus is better for my use than OF1 was. As to iOS vs. Mac, you’re welcome to your opinion, but for me, the current state of Mac hardware (I made the mistake of purchasing a 2018 MBP and returned it within two weeks) has made it so that I use my iPad daily and only use a Mac when I absolutely have to. When I do photo editing, I almost always use my iPhone or iPad to do so. Yes, when I’m writing software, I have to use my Mac. For documentation and image work and research and almost everything else, I use mobile devices because the last generation of MBPs are horrible for actually getting work done.