Sometimes, when I am adding a node to a line or shape and I double click to put it where I want, it gets inserted on the other side of the next closest node. Best way I have found to deal with this is to just move the nodes down. Annoying but do-able.

This doesn’t happen all the time and I haven’t checked to see if it is on the “red” or “green” side of the line or if it is even consistent.

You double click on the canvas? I’m not sure I follow. How are you adding the new node? Which tool are you using? Is this from a stencil? An example document would really help to clarify what you are seeing vs what you are wanting if it’s possible to share that.

Just a few of the factors that can influence diagramming logic:

The best way to make sure you have the settings to give you exactly what you want is to set them up once, export as a stencil, and reuse the specific combination to ensure consistency. Reuse via Templates and Stencils is where OmniGraffle really shines the most by letting you specify your settings in so many ways.

If you are able to post an example, I’d be happy to make some specific suggestions.

Ooh… Let me see if I can clarify. Going to be difficult since it isn’t always a repeatable occurrance.

I have a line (Straight line, stroke doesn’t seem to be a factor, corner radius set to 10 pt). I select the node tool (or selection tool) and put over the place on the line I want to insert a node. Double click/tap. Most of the time, the new node is inserted in the correct place. However, some times it will be inserted on the other side of an adjacent node. Everything works after that. Only issue is where the new node is sometimes created.

Straight line
Rounded corner radius of 10pt (works better than curved line for me)
Stroke 1.5pt
No Shadow
Flexible Canvas (I love this!)
No Magnets
No Layout
Grid displayed but no snap
Units are feet (difference from feet “’”?)
Canvas scale is 1 inch = 20 feet

Not sure about an example because it is so random. I just tried to recreate issue four times and it would not happen. File is still at 56MB with all the extra graphics I have in there.

I know this probably isn’t helpful. Wish I could get it to occur more often.

Ha! I see my confusion was a simple misunderstanding of the meaning of node. You are adding what we call a midpoint. I thought you were adding a graphic to the line.

OmniGraffle users have reported that sometimes they want to add a midpoint without changing anything about the line, but when they add a midpoint, the line moves (which they do not want). Is that the issue you are running into? That you need a way to add it where you want without the line moving slightly? Because unless you are zoomed in really carefully, it’s easy to unintentionally move the line when you only wanted to add a midpoint (node) to it. You can work around this by using Add Midpoint from the context menu instead of clicking, but I understand that isn’t as fast. It would be nice to be able to specify to add a midpoint on the existing line, but do not move or reroute the line to it.

They sometimes jump a little but that is no big deal.

No, the issue is the node is not added where I double click; it is added elsewhere - usually on the other side of an adjacent node. Creates a weird ‘kink’ in the line until I move the nodes around and straighten out the line. 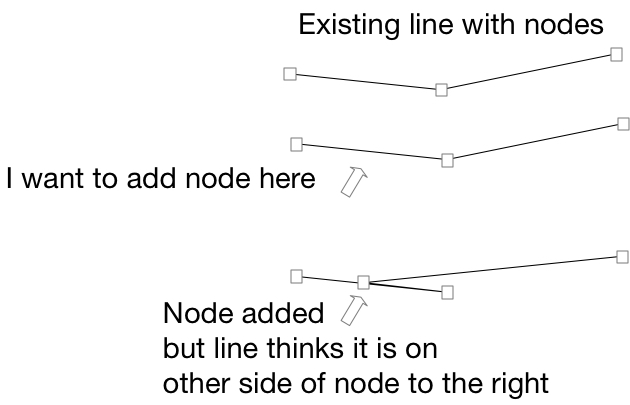 Wow. That looks like unexpected behavior to me. I’ve tried to reproduce it here, and so far no luck.

If you can get this to happen reliably, please send us a simple example via Contact Omni in the help menu. You can check to Anonymize it, which will replace all text with the letter X, but still give us the lines. If we are able to reproduce the problem it is much easier to fix it.

Sorry for the trouble and thank you for explaining in detail.