Hi, I’d like to use OmniJS to invoke an x-call-back-url action in DEVONThink To Go, however it seems that URL.call() is only designed to call OmniJS actions in other Omni-JS-enabled application.

It’s not immediately clear to me whether it is documented at all, but @kcase shared this on Twitter last night: 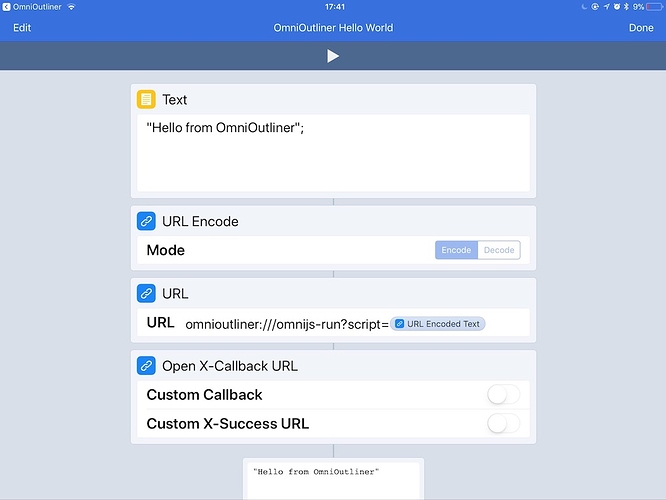 Not even sure that I fully understand how this would be used to return values created at run-time in the omniJS JSContext.

OK, got it – I was being slow. It does return an evaluation of the text interpreted as JS code.

This for example, returns a list of names bound in the global namespace: 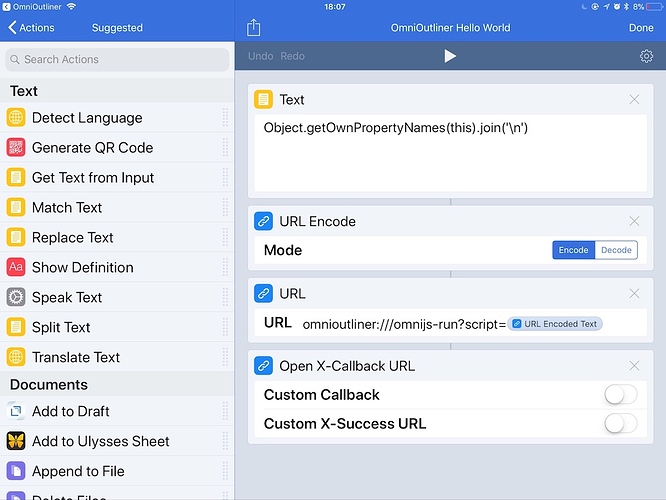 After some experimenting, it seems as if OmniJS‘s URL.call function supports calling x-callback-urls, however it seems that the function passed as a callback doesn‘t get called.

For example, the following code activates DEVONtink To Go, which calls back to OmniOutliner. However, the callback never gets executed…

Where, out of interest, are you hoping to see the console.log string ?

In OmniOutliner 3/iOS, I ran the Script directly from its console.

If I run this code in OmniOutliner iOS console,

It opens workflow app, and I get this output. 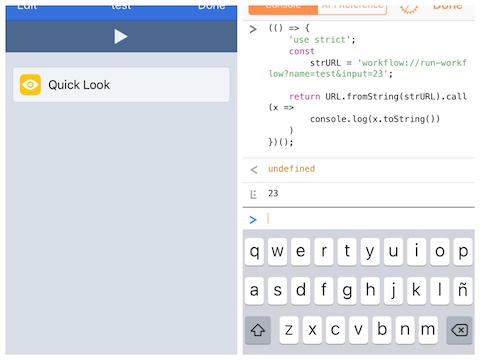 I can successfully pass a number from OmniOutliner to Workflow and output it through OmniOutliner console. I cannot do the same with a string. I wonder why is that.

I cannot do the same with a string. I wonder why is that.

That’s due to a design oversight. We’ll fix it.

That’s due to a design oversight. We’ll fix it.

It works now. Thanks for the follow-up !

Could you give an example of that ?

I’m not sure if there has been a regression, but I’m getting the symptoms that was mentioned above when trying to call urls from omnioutliner pro. Whether I try to fetch or call a URL (bear:// in this case) the callbacks never fire and bear is never notified.

I can confirm that the URL is valid because if I console.log it and then load it in chrome, it all works as expected.