Here is my usage case:

I have a single action, such as “Write a Keyboard Maestro macro to do blahblahblah.” This piece of code is important to several different projects. Once it is written and checked off as done in one project I would like it to appear as checked off in all projects that depend on it.

So… is there a way to have a single action appear in multiple projects? There are a lot of ways it might be implemented as a feature. For example, I could imagine actions having a “home” project, but being able to alias them into other projects. Unfortunately I’ve not found such a feature.

If it is not built in, has anyone developed a way to accomplish the same thing? I could imagine, for example, using an original action’s unique identifier or custom URL link and pasting it into another action’s note, then giving both actions a tag like “Aliased.” Then I could write a piece of AppleScript that looks at an action with the Aliased tag and checks to see if any of the other Aliased actions with the same identifier have been marked complete. If so, it would mark them all complete.

So… it can be done, but I’m wondering if anyone can point me to a capability I have yet to stumble across, or has a similar or more elegant solution that I wouldn’t have to write and debug.

@kaitlin is developing a plug-in for this 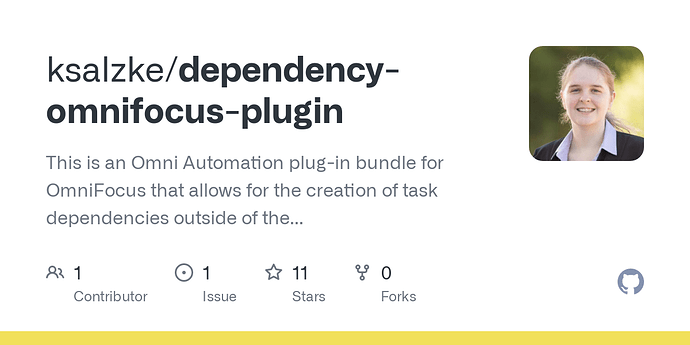 GitHub - ksalzke/dependency-omnifocus-plugin: This is an Omni Automation plug-in...

This is an Omni Automation plug-in bundle for OmniFocus that allows for the creation of task dependencies outside of the built-in sequential action group structure. - GitHub - ksalzke/dependency-om...

Thanks! I’ll keep an eye on it.