Can't get gesture for multiple selection to work consistently

I’ve read from several sources, that in order to select multiple objects, you:

Tap and hold to select the first object.
Using another finger (either on the same hand or with your other hand), tap to select additional objects.

I can only get this to work about 5% of the time, and I don’t know what I’m doing wrong. (This is with OmniGraffle Pro 3.3 on an iPad Pro running iOS 11.2.) My main problem seems to be that, whatever I’m doing, the contextual menu tends to pop up, and once it does, I have little success selecting or deselecting other objects. (But sometimes even that’s not true and I can select a second object even though the contextual menu’s popped up. It’s just very, very rare.)

So, first things first: if nothing is selected, doing the above exactly as stated never works for me—I tap-hold the first object, and the contextual menu comes up before I can tap the second object. If I try to go very fast (tap-holding the first and immediately tapping the second), it’s usually as if the second tap didn’t happen at all.

If, instead, I tap-select the first object, and then tap-hold it and tap with another finger, then I can select the second object sometimes, even if the contextual menu comes up. This is very hit-or-miss though.

For instance: right now I have a thick bidirectional arrow on the horizontal, and another on the vertical, and I want to position the vertical to make a Cartesian plane with x- and y-axes and origin in the center. The x-axis is in the right place, so I want to select the y-axis as the second object and use the vertical- and horizontal-centering alignment buttons to reposition the y-axis correctly. There are other objects on the canvas, so drag-selection doesn’t work.

(Yes, I know I could check the geometry numbers given in the inspector for the x-axis line, do some arithmetic, and reposition my y-axis that way. That’s not the point, as there are many other operations for which I need to do multiple selection for which canvas-drag is insufficient and for which there’s no workaround—grouping, for instance.)

So: I tap-and-hold the x-axis. Then I try to tap the y-axis so I can align it, but nothing happens. So I try tapping the y-axis again (still holding the x-axis). Then the contextual menu appears, often right on top of the y-axis such that I sometimes inadvertently tap a menu item. But assuming I avoid that, continuing to try to tap on the y-axis usually does nothing—the x-axis remains selected alone.

Sometimes the x-axis jumps up to the point I’m tapping on the y-axis (some movement gesture I don’t know, I suppose), and I hit undo and try again.

If I tap to select the x-axis first, then tap-hold it and tap the y-axis, again, about 5% of the time I’m successful, but usually exactly the same thing happens—the y-axis doesn’t get selected, the contextual menu eventually pops up, and sometimes strange and random things happen.

I’ve created new documents and tried using absolutely plain uncustomized templates and lines, so I don’t think this is weirdness of my template or styles. I’ve uninstalled and reinstalled the app, no change.

Since it does sometimes happen, I’m guessing there’s a rhythm or something that you have to have to get it to work consistently. Can anyone describe it in more detail? I can’t find any videos showing this process online. I suspect I’m just being stupid in some way, but I can’t figure out how.

This is driving me bonkers. Any help would be greatly appreciated!

If the lines are thin (say 1pt or less), you may need to zoom in more to select both objects. If you see a magnified circle, that is to show you that the start or the end of a line is selected instead of the entire line.

Sometimes the x-axis jumps up to the point I’m tapping on the y-axis (some movement gesture I don’t know, I suppose), and I hit undo and try again. 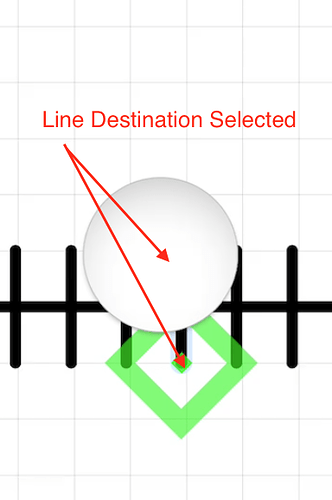 Here is a video capture and I’ve highlighted a few things that might go wrong so that you can see what is happening and what to avoid, so you know what has happened if an intended multiple selection gesture with the intent to move a line has gone wrong. Video is up at https://youtu.be/pkSM55a_04s if you’d like to check it out.

This example is of a correct multiple selection with the blue highlights below. If your intent is to move the lines and no resize them, avoid dragging the selection handles and drag the lines themselves instead. 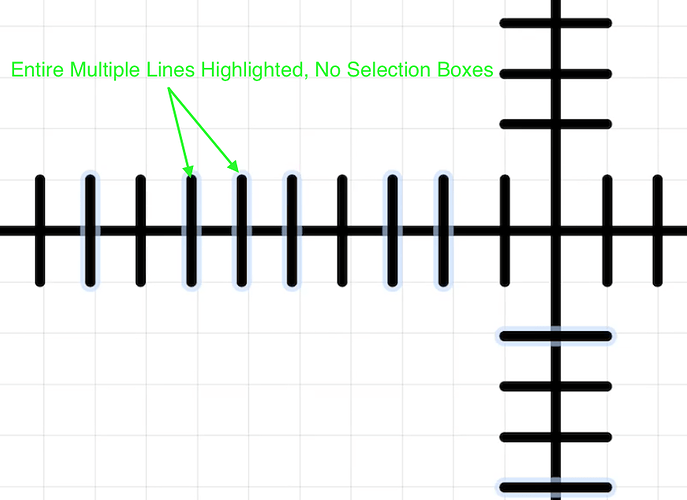 Here’s the entire list of gestures supported in OmniGraffle 3:https://support.omnigroup.com/documentation/omnigraffle/ios/3.0/en/gestures/. With so many possibilities, I’ve also accidentally triggered gestures I didn’t intend. Sorry to hear that the gestures have been causing frustration. If we can help further or troubleshoot with you in more depth, please reach out to us by email at omnigraffle-ios@omnigroup.com and we’ll be happy to assist.

I have a similar problem, but with an external keyboard. With a physical keyboard for an IPad, it really makes sense to have a keyboard shortcut for this — “Shift” + Select by tap. This would match the natural way to do this on a Mac as well.