I get the following error…

…when I select the URL in the current tab of Chrome and press my clipping shortcut of ctrl-opt-cmd-m.

When I click ok on the error the URL is put into to the notes field but the title is not put into the “item name area” like it used to be.

I also have the same error when I use clipping function. Is there any way to avoid this error? 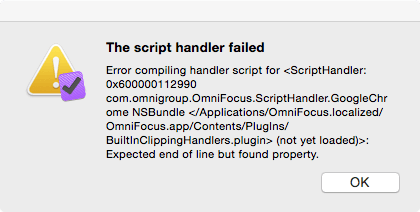 I’ve resorted to using an extension in Chrome. So far it has worked well, other than it requiring me to mouse over to it instead of using a keyboard shortcut.