Colours set by Hex code changing on their own (gamma 1.8 vs sRGB) [OmniGraffle 7.2 adopts sRGB]

I’ve been setting up some palettes for some branding work, just 6 squares filled with a colour with a hex code on top, basics.

When setting the hex by pasting into the colour picker, it takes and holds, but if I go away on something else in the interface for a bit, or close and open the document, it changes the hex code to a similar, but not the same colour.

This is corporate branding, obviously that’s just not acceptable and will get me fired for not paying attention!

Any help or advice?

I assume incidentally - that this is something to do with the colour profiles as when I shift to “Device RGB” the problem doesn;t seem to happen, however I have no idea what the colour profiles have to do with my work (I’m entirely RGB as it’s all for screen) and more importantly how to get everything on that profile and to stay there!

Hello – any word on this Omni? Has been messing up my colours for some time.

Glad I’m not the only one to have this issue - it’s a real big beef all the time when I need to do properly matched colors.

This is happening for me too when I Copy/Paste objects or text from one canvas to another. The color changes slightly. It’s really annoying.

Although I have contacted Omni about this - they didn’t seem keen to do anything about it. Have any of the rest of you contacted support directly?

I’ve been having this problem for years. It makes me crazy. I use omnigraffle to develop final UI assets, and the colors are consistently WRONG. I had switched to using Sketch to generate assets (which is a great app in many ways, but no replacement for OG), but now, in OG v.7, with the ability to export SVG files it’s really egregious.

Researching this further today, I read this post on the Sketch documentation site that proved valuable for getting things to work properly in OG. After reading that post, I changed my System Prefs > Displays > Color > Display Profile to sRGB IEC61966-2.1. I’m not sure if that step is necessary, but it looked the same as the calibrated profile for my Thunderbolt Display, anyhow.

Next, in OG 7, I noticed that individual object’s color properties - i.e., the fill color of a specific square; or the stroke color of a specific circle - can all have colors with different profiles assigned to them (!!). This was unexpected to me, as I had assumed that colors in the app subscribed to some coherent, consistent profile. That’s how Sketch works, but in OG, apparently each object can have different color profiles.

Armed with this information, I was able to create a color palette in OG > Colors > RGB panel using hex values, however, it’s important to select sRGB IEC61966-2.1 from the little gear icon at the top of the RGB panel FOR EACH COLOR. This is not a “sticky” setting. For me, it reverts to the “Generic RGB” profile every time I use other color pickers. 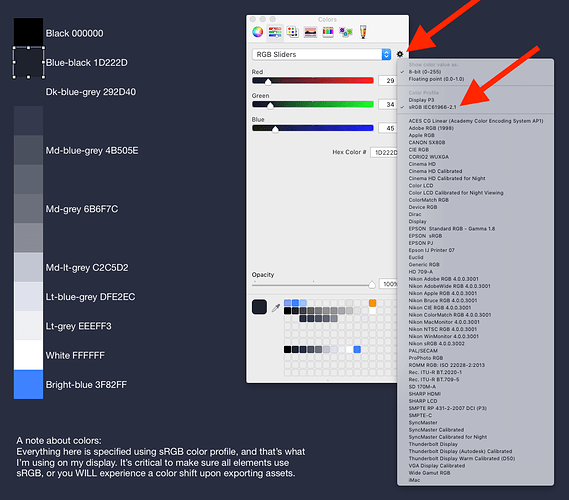 I have no idea what use cases are satisfied by allowing such chaotic application of color models throughout a document. That’s a question for the application developers to address. Personally I would prefer if this was just set globally, and maybe allow overriding the global preference per document. With different color properties possible on a sub-object level, it means I now have to go through my whole design document and re-color everything painstakingly to make sure everything uses sRGB colors, and then remain constantly vigilant to avoid using any colors that are not defined using sRGB profile, or risk having the values change upon export.

Hey thanks for this - old topic but still an issue for me when doing colour correct UX designs.

I’ve moved to Sketch entirely recently, a big part of the reasoning being the problems with colour. I still pull OG out for flow charts but nothing else now, always a pain in the ass to run two systems concurrently.

I hope Omni see this, if you send them any more feature requests, point them at this post!

I hope Omni see this, if you send them any more feature requests, point them at this post!

This will be fixed in OmniGraffle 7.2.

(For the curious: the issue was that at some point in the last 15 years the semantics of the Cocoa API for “calibrated” color spaces shifted, so colors which were previously calibrated to look the same everywhere became “generic” RGB that Apple recommended developers stop using. In 7.2, we’ll be switching to use the extended sRGB color space by default, so the hex colors you enter in that default space in OmniGraffle will match the hex colors that the web has standardized on.)

This is great news, thanks for the information. Looking forward to this problem going away whenever v 7.2 materializes.

Good to see this is being fixed but amazed it is only going into 7.2 - I reported this issue, as did others years ago - it’s an actual fault with the entire 6.xx series (and likely before) . I stoped using OG because of this and had to move to sketch. Can;t this be patched in?

ood to see this is being fixed but amazed it is only going into 7.2…. Can;t this be patched in?

The work is already implemented, but it needs testing (it touches color-handling code everywhere in the app) and 7.1 is about ready to ship (adding localizations for Deutsch, Español, Français, 日本語, 한국어, Nederlands, Italiano, Português do Brasil, Русский, and 简体中文).

But it won’t be a long wait: I expect 7.2 to be in public test by the end of next week.

This release adopts sRGB as the default color profile, rather than using the “generic RGB” gamma 1.8 color profile.

(Some history: OmniGraffle has supported using your own choice of color spaces for any color for many years: you can choose which color space you’re using each time you select a color in the color panel. Mac has traditionally used a gamma 1.8 color space because it was a better match for print, while PCs have traditionally used gamma 2.2, which was based on TV and became the basis for the sRGB standard. Because it was the Mac default, OmniGraffle used the gamma 1.8 space by default as well—but now that Apple has switched to sRGB for all their platforms, that’s what we’re using as the default color space as well in OmniGraffle 7.2.)

Maybe I’m not being obvious enough so I’ll try being rude.

Because it was broken I left to use SKETCH

Older versions should be PATCHED to make them not BROKEN.

OmniGraffle 6 was not broken, it simply used Apple’s original (print-based) color space by default. That color space isn’t broken, but it’s no longer the default in newer operating systems and we’ve adopted sRGB as our new default in version 7.2.

I’ve explained how you can use sRGB in version 6 if that’s what you’d like to use there. OmniGraffle 6 will also use sRGB any time you pick a color from the screen using the eye dropper tool in the color panel, since that’s the color space for screen colors. Is there something that I’m missing that’s blocking you from using sRGB in version 6?

By the way, if you have existing documents that you’d like to convert to the sRGB color space, you can download the free trial of OmniGraffle 7.2 (currently in public test) and open and save those documents. All of their Generic RGB colors will be converted to sRGB, and when you open those converted documents in OmniGraffle 6 it will honor and preserve their sRGB color settings.

You didn’t explain Ken - at no point at all in any of your replies were you clear about what the reasons were and what the fixes were - if after 2 years I was unable to get a reply from anyone here, but others had the same problem, it was broken. Either by poor interface design (likely) or actually built wrong.

Regardless of your inability to explain this to us in a simple and easy to understand way - I’ve left for Sketch anyway where I don’t have to worry about the colours!

It just needs to work. I don’t have the time for mucking about fixing it all myself.