Combining OF3 with Paper

I hear that there’s value in hybrid systems, and recently I have been using a conventional note book and pen to act as thinking space between OF and actual execution. The approach has it’s advantages: using pen and paper seems to get my head into the business of the day; it allows me to get into the granular detail of a particular issue; and it seems to let me cope with one particular chunk at a time.

Does anyone have any experience with working according to a hybrid system over a period of time?

I know @wilsonng uses paper alongside his system and I bet he’s got a post about it somewhere too.

I tend to carry index cards with me and use those for capture - yes, I can use OmniFocus but this way if I need to give it to someone else it’s easy, as is adding a diagram! These all get added to OF later of course.

Does anyone have any experience with working according to a hybrid system over a period of time?

I use a paper notebook (actual type varies - see below) to:

Periodically I go through the notebook and decide what to do with the entries, marking them accordingly. That provides a nice record as well.

For several years I used Moleskine medium sized books. I’ve more or less permanently switched to variations on the Midori Traveller’s books and covers because I love the paper (fountain pen user) and they’re very flexible and a great size. I also have some really tiny notebooks that just go into whatever pockets I have when I don’t want the "real thing’.

But it doesn’t really matter what you use- I find genuine benefits. OF is for managing identified and structured tasks. Tinderbox is for collecting and collating my notes. Curio is for structuring documents and plans. I’ll use OmniOutliner (because it’s on IOS too) and iThoughts from time to time. But the paper version is almost always the bedrock.

I know @wilsonng uses paper alongside his system and I bet he’s got a post about it somewhere too. 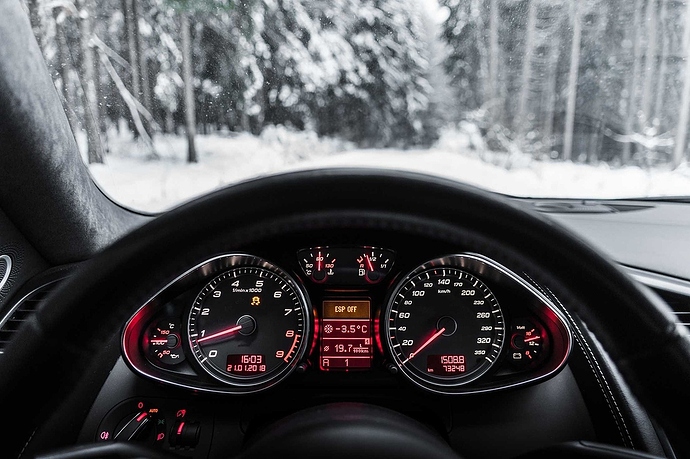 A Different Approach to the OmniFocus Today Perspective

Dashboard image courtesy of pixabay.com I’ve been rethinking my Today strategy. I’ve used the traditional Today custom perspective that is seen in many OmniFocus workflow blog posts. I’ve tried for a long time to get my Today view to work. I’ve...

I’m sure I mentioned it in quite a few other places as well.

This is a great article, and thank you. It clearly shows the interface between OF and the paper system.

I like the way paper can be used with fuzzy logic (not sure if that’s the right phrase) to draw down items from OF, as well as daily wildcards.

One thing I’ve tried to is to experiment with what can go digital and what can go analog. Don’t dismiss the other tools that you have in your toolbox. A Swiss Army Knife is a nice to slice something. But sometimes we just need a real knife for specialized applications (sawing wood, cutting paper, or sawing down a tree).

I’ve experimented with going all analog and then slowly going back for some things to digital. I got a new sense of appreciation for paper. Previously, I wanted to go all digital. But some things can get lost in the digital ether that is our computer. A notebook provides something physical and concrete and not as easily changed (putting pen to paper) as hitting the Delete key…

I have been bullet journaling for several years, but it wasn’t helping me keep track of gnarly and extended projects, so I’ve incorporated OF into my task management system. I still bring a paper notebook with me everywhere and “life log” throughout the day, noting, for example, a task I need to do alongside notes I’m taking at a meeting or while working.

I use a specific bullet to indicate I’ve moved the item to OF: ^ 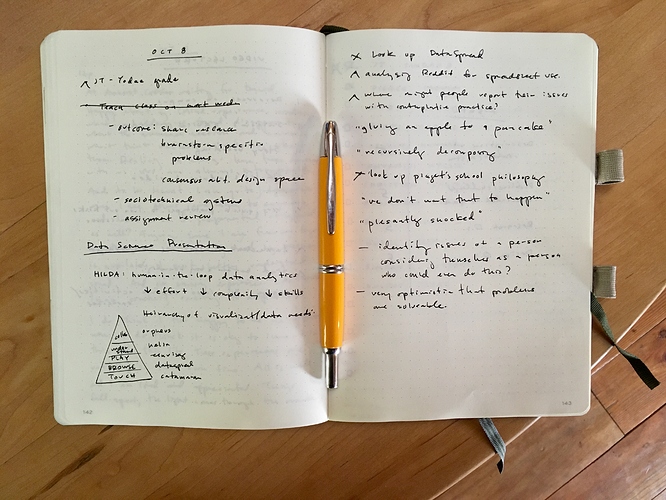 Wow! I really lik your method and will start to use it this very moment. Earlier I used a LiveScribe pen and a LiveScribe book and marked todo’s with a checkbox. Then moved the to-do’s manually into OF. The whole memo was then synced into my Evernote which also can do searches in hand written text.

What I liked especially with you method is the markers you developed.

@arnesrnielsen – you might like to take a look at https://bulletjournal.com/pages/learn to get the gist of the rapid logging/bullet system (my contribution was only the ^ for OF migration).

I really like this approach. I am also combining bullet journalling with OF… your post is very helpful!

I’ve been using bullet journaling for the past 8 months, and have been infinitely more productive because of it. However I do a lot of project work at work, and struggle organising the tasks that need to be done when priorities change, keeping (an organised) note of things that I remember I need to do, etc, and always felt that a digital task management application was still needed to keep track of everything…
I’ve been following the bullet journalling method very closely, I.e. migrating tasks, etc, but just the sheer quantity of things I have going on, feels overwhelming to have only in a notebook. My wife and I both work full time, we have 3 kids under 5 (3 under 2 at one point when our twins were newborn), so we have a fair amount happening at any one time.

I’d love to hear a bit more how those of you who have tried bullet journalling since finding out about it, have implemented it in a hybrid system alongside Omnifocus…

I wonder how Elon Musk keeps track of all the things he needs to do!..

I do my planning and review in OmniFocus. I transfer my due and a few flagged tasks to my BuJo. Then I work from my BuJo. This reduces the distraction of returning to OmniFocus and going back to planning mode. I had a few more ideas here. 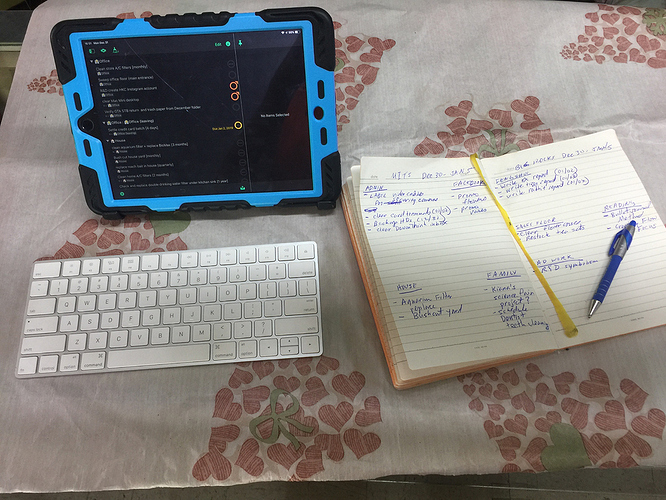 The Dynamic Duo: My OmniFocus and Bullet Journal workflow

In the Twitterverse, a question was asked about how we use OmniFocus and the Bullet Journal (BuJo) together. https://twitter.com/chalmagean/status/1076748124272635904 @JoeBuhlig discusses his adventures in an all-analog world here: Since that...