I’m huge fan of the Eisenhower Matrix since it helps me quickly prioritize my stuff and, maybe even better, find out at a glance where I’m standing when looking at the matrix.

Long before start using OmniFocus I used to use Focus Matrix, which is a neat software package that leverages the Eisenhower Decision Principle.
Then I started using OF so Focus Matrix was kind of relegated for only the visual representation of the tasks priorities, while all the heavy lifting was made with OmniFocus.

This workflow soon proved to be quite inefficient so eventually I ditched out FM in favor a contexts system based on the Eisenhower Matrix: 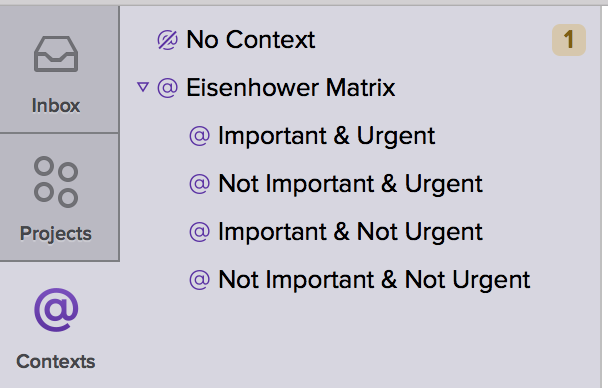 This comes of course with a big drawback: in OmniFocus 2 you can only assign one context to each task, following the GTD principle - so, for example, I’m unable to prioritize my stuff depending on the context I’ll be doing it. Good thing is that being OmniFocus 3 around the corner is a great relief as I believe the new tags system will solve a lot of similar shortcomings.

What I would really love to have in OmniFocus 3 is a visual representation of the so-called Eisenhower Matrix as seen in Focus Matrix and similar apps; while I was able to hack something in the line with OmniFocus contexts, it’s not the same as having a visual feedback of what’s going on: 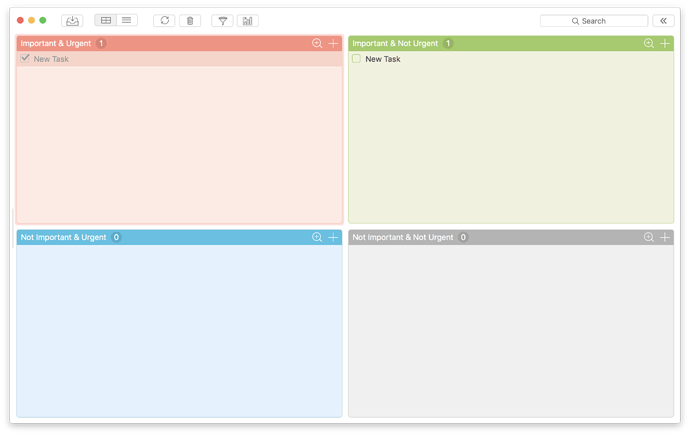 Urgent
Not urgent
Important
Not important

Then I create a perspective that shows combined tags focused on these 4 tags. It would show

Not at my Mac right now. I’ll try to get some screenshots later when I return to office.

Good to know, I’m eager to put my hands on OF3! I hope that OF devs consider to add a visual, matrix-like representation in the future.

For now, I can create a desktop space on my Mac and open 4 OmniFocus windows. Each window would have a perspective focused on one of the four tags.

But, yes, it would be nice to see a matrix-like representation. E-Mail omnifocus@omnigroup.com to vote and let your voice be heard.

Beautiful, will do it, thanks for the heads-up.

I can create a desktop space on my Mac and open 4 OmniFocus windows.

Too bad that by design (most probably?) or because they didn’t think about it yet (hard to believe), macOS is dumb enough to forget the position of maximized apps and spaces whenever you close the apps or log out 😑

You could have a Keyboard Maestro Macro to open the 4 windows, set the perspective and position them for you ;)

Or a KM macro that uses AppleScript to query Omnifocus and build a diagram in OmniGraffle? :-)

Serious point - if there is one - is the resulting display need not be in OmniFocus.

You can also use Moom to look at the title of the OmniFocus window and have it auto-resize each window to 4 squares.

Thank you so much for stepping in with your great ideas to hack on my workflow.

You’ll see, when I jumped wagon to the Apple universe after years of running GNU+Linux everywhere, one of my main goals was to stop expending time on hacking my way around almost everything and free myself to actually do stuff I wanted to do. Hey, I do have a trusty laptop with Qubes OS as my main privacy-oriented OS and run GNU+Linux everywhere else (I even have a FreeBSD NAS), but by switching to Apple-based systems I can say I fulfilled like the 90% of that initial goal, which is absolutely amazing – no fanboy-ism here, just my personal experience.

I’ll take a look on the solutions you guys name, I heard of Moon and Keyboard Maestro but never felt I really needed them.

And yes @MartinPacker, I do believe that having that kind of visual feedback would be a pretty good addition to OF, in the same way having a Trello-like board in my office helps me stay current on where I am, what I accomplished so far and what’s needed to be done next. To each their own? =)

Interesting… I wonder if you could do without the urgent tags, just relying on due dates to indicate urgency.

I usually use due dates for urgencies and flags for importance.

OmniFocus’ flexibility allows you to use flags and due dates or use tags (urgent, important) for the Eisenhower matrix.

I’m also a fan of the Eisenhower Matrix and implemented it with Contexts for a long time, Q1, Q2, Q3, Q4 even a Q0 for my current task.

But eventually I realized the Eisenhower Matrix is intended to help you internalize that tasks in Q3 and Q4 are to be let go of entirely. They should be deleted or not entered into your task manager in the first place.

So that leaves Q1 & Q2 tasks, and my aforementioned Q0. I eventually realized this was similar to the Priority 1, 2, 3 method so many use as a categories for their tasks. This does not diminish the benefit of asking yourself if any task you enter is actually “important” and if not, to let it go.

Thanks a lot @david_n for sharing your workflow, I’m looking forward to implement some of the stuff you mention.
Cheers

I used multiple tags in OF3 to create something that resembles the Eisenhower matrix.

Helping individuals and companies be better at remote work

If you decide to use the matrix, I’d simplify the tags to urgent and important. Why add the extra work of tagging the tasks that are not.