Here’s my dilemma - I’d really love to exclude projects and action groups from non-project perspectives (I hate how they clutter the ‘No context’ context), but I’d like to be able to avoid the following scenario. As many, I have a ‘Today’ perspective built around available flagged actions. Now imagine the following hierarchy:
Project X (sequential, flagged)
|–> Action group A (action A1, action A2)
|–> Remaining actions

Initially, Today will show A1 and A2 as available. The issue is, once I complete them, action group A will not be shown in Today (due to action groups excluded from non-project perspectives) and nor will remaining actions from project X (they are waiting for action group A to complete). That’s pretty bad as I’m potentially losing track of a stalled project that was important to me (it was flagged).

As much as hypothetical it may sound, this is a real issue for me since I use similar structures quite frequently.

Is there any reasonable way of solving this?

On the Mac, the Preferences window has a section for “Organization.”

Be sure to turn on the checkbox for "In perspectives without project hierarchy: [√] include projects and groups 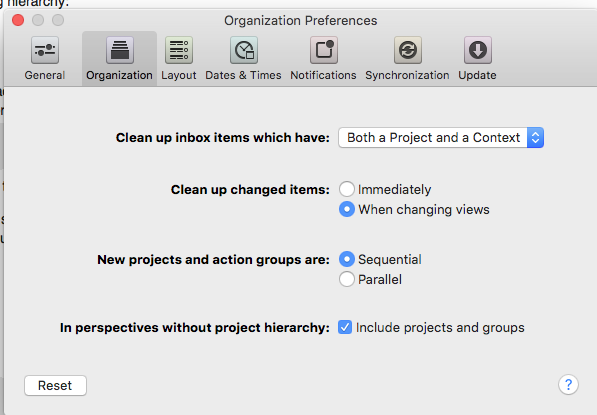 This will cause projects and actions groups to show up.

I think there is a similar setting in the iOS app.

Thanks but finding the option was not my actual issue; perhaps I wasn’t clear enough… The problem is that with this setting off, action groups which have all their subtasks completed will not show in my Today perspective (which is context based). At the same time, I cannot find any simple way of doing a sanity check for this scenario.
For projects, one can easily create a perspective showing those that are stalled. Regretfully, I don’t think there is an equally convenient way for action groups.
That’s the reason for my post here, perhaps somebody has come up with a reasonable workaround and would like to share? If not, for this reason alone, I’d need to stick to the default setting.

ahhh… sorry I wish I knew the answer too.

But I work around the nagging feeling in the back of my head that I might be missing up by using the review perspective on a daily basis. This is my “sanity check.”

Flagged projects or any project that has a lot of changes (adding, deleting, revising tasks) will get a shorter review cycle (1 day - 1 week). If it is something that is in the hot seat right now, I set the review cycle to once a day.

Most of my active single action lists and other active projects have a review cycle of 1 week. I can just check on them once a week and not worry about them too much.

Another possible workaround is this clever Applescript by @curt to verify that next actions exist, not only on projects but also in any existing action groups. I guess it might serve your “sanity check” purposes.

Another approach I think I’ve seen suggested on the forums here is to have the last task in the project be “define next action” or something similar. That way, you get alerted when there are no further defined actions and can create one/some.

Also, if the action group is really complete once those two tasks have been finished, and all you want to do is to check it off, set auto-complete for that action group. (I don’t get the sense this is your situation, but am adding it just in case.)

The issue is, once I complete them, action group A will not be shown in Today (due to action groups excluded from non-project perspectives) and nor will remaining actions from project X (they are waiting for action group A to complete).

Turn on “Complete when completing last action” for the action group;
If (action A1, action A2) were the complete action list for action group A, then it will complete when they complete, and release remaining actions;
If (action A1, action A2) were not complete action, add a third action = “Add more actions to Action Group A”;
The “add more actions” will appear in your context-based perspective to remind you that the Action Group is stalled.

You could automate this by making a template or AppleScript that would create an Action Group with complete checked and the “Add more actions” item already included.

Many thanks, everybody! The script mentioned by @ediventurin is great, I wish extensions were possible on iOS, too. The same goes for the autocompletion of action groups. Well, let’s hope the latter will come - I remember @kcase responding to my tweet that it was on the radar so there is a chance…

While on that topic, check this tweet by @kcase in reply to my question about the future roadmap