Therefore this Workflow is only useful when you have originally called up the project from a custom Perspective. It does no harm, otherwise, though.

I use it quite often. Reason:
Most of my custom Perspectives are “get it done” oriented. They only include folders, projects and actions that are available NOW.
My projects also include actions that serve more as a reminder or as notes, e.g. eMails, minutes of meetings etc. These are “on hold”, of course.
In case I just finished some action of a project, I sometimes want to see the whole picture, possibly scanning my notes and including the possibility of adding another action.
Because my “normal” view parameter is normally set to “remaining”: Now I can, without jumping through hoops. Which had been a real pain specifically when I had just completed the last available action. It’s still not really elegant, but hey, it works.

The Workflow loops thru the pasteboard and discards everything but the last entry which it then calls. It’s been tested with OF 2.15 and WF 1.5.1. Enjoy

Or, in your perspective, you can just long press on the project and tap “go to project”.

I’d love to, but this doesn’t work for me. Is that a thing only possible with 3D-touch, I only got an iPhone 6+?

I was talking about starting from a GTD perspective that shows exactly the actionable Folders, Projects and Actions:

It’s not a 3D Touch feature. I’m using the long press on my iPad Pro which doesn’t have 3D Touch.

Just a shot in the dark: From the detail sheet of an action one can, by clicking on the arrow to the right of the associated project, stop editing the action and go to the project. Is that it?
Unfortunately it wouldn’t work if my perspective shows no more actions for the project.
My workflow solves that in 4 taps. Not really elegant.
So I’d love you to describe a better solution.

You don’t need to edit the action. If you have a custom perspective showing projects hierarchy, you can simply tap&hold for 1 or 2 seconds on the project’s title and you get that : 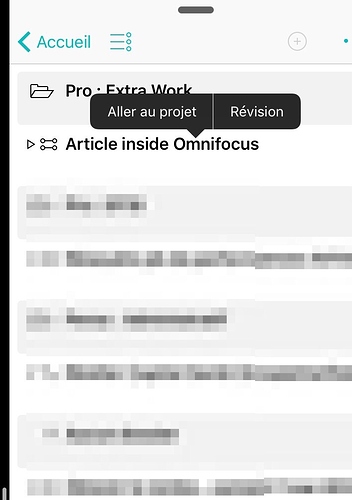 It’s in the French version of OmniFocus but you should get similar prompts in English as ‘Go to project’.

Got it.
It’s an iPad thing that I now also found in the manual: page 36. Not available for iPhone, though.
I’ll amend the original post. Thanks for having been patient.

Weird, this should work on iPhone also. It used to, I’m sure. I’m filing a bug report email.

On iPhone, swipe to the left then More to see the option to go to the project.

Oh awesome! I knew that had to be somewhere. Weird that long touch no longer works, but slide/force touch makes enough sense. Thanks for clarifying, @sebnoumea.