I like being able to group tasks together, but I don’t like the bar generated for the group. I’d rather just display the bars and milestones for the tasks contained in the group. This is especially a problem if you have groups within groups, since each group gets its own bar. Is there any way to hide the group bar?

@davidmcb It is not currently possible to hide group task bars in the Gantt, sorry! I’ll file a feature request for this functionality in our development database and attach your comment.

For the time being, I’ve eliminated groups in order to make the Gantt look less cluttered. I’ve prefaced each task name with a group name, and a separate color for the bars, in order to show separation between different task groupings.

BTW - not to rub salt in the wound, but this is something that’s easily done in MS Project.

@davidmcb I’m glad to hear you found a workaround for the time being! I thought about it a bit more, and you could also potentially set this view up by applying a filter that hides group tasks:

@davidmcb Ah, I see! I had assumed you were hoping to hide groups in both the Gantt and the task outline. You can actually set this up by setting the Group task bar style to “Clear” in OmniPlan’s styles view. To do so, customize the Task Bar Color and Completion Fill color for Group tasks. Setting the fill’s opacity to 0% will result in an invisible task bar. 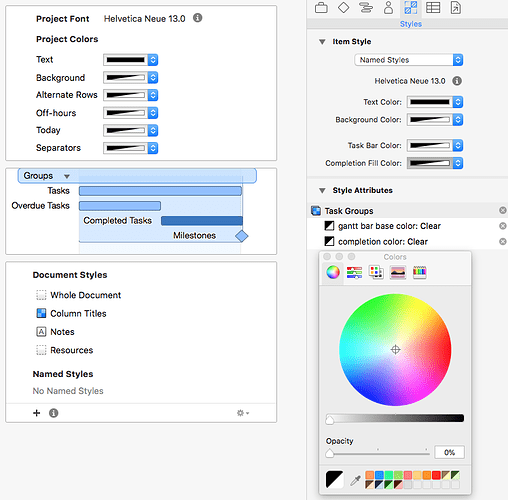 Disclosure triangles will be visible to the left of the invisible task bar in the Gantt, but this should hopefully be much closer to the view you were looking for:

@ains Ok - great! That’s what I was looking for. The triangle on the left is a tiny bit annoying, but I can live with it. Thanks!