How to Organize and Review Someday/Maybe Projects?

The only way to do this, that I can see, is to remove all the someday/maybe projects from the normal folder structure and put them into a separate folder (or folders) with the status of the folder set to “Dropped.” Then they disappear from the Review perspective, and I can simply go to that folder to review them separately. But is there any way to keep the someday/maybe projects in my normal folder structure and also remove them from the Review perspective?

I realize that I could simply set the view settings in the Review perspective to “Active”, and provided the status of the someday/maybe projects are set to “On Hold”, they would then be removed from the Review list. But the “Active” view setting also removes projects that are deferred or on hold temporarily. So this is not an ideal solution.

Expanding this question beyond OmniFocus, what about keeping someday/maybe projects outside of OmniFocus entirely, in text file lists or spreadsheets for example? Or maybe keeping some in OmniFocus and some outside? Then, what would be the organizing logic behind what goes inside OmniFocus, and what stays outside?

To me this is an important topic for making reviews as efficient as possible, so any comments would be appreciated.

My approach is to keep Single Action List Projects called:

These projects are set to Context/Tag “Someday/Maybe”, which is set to an On Hold status. I then keep ideas for projects of a someday/maybe nature as actions within those Project containers. In this way, I feel I am deliberately giving less “air time” to these projects than to actual active projects. Also, I could set the review frequency to be less than that of my active projects.

I do still have Someday/Maybe actions withing my Project structures, but those are truly actions for consideration, and not whole outcomes.

Hope this is useful!

I use the active status to represent a big rock project I am actively working on in the next 7 days. All other projects are set to on hold and considered Someday/maybe.

I tried to wring my thoughts out here…

I have a @someday/maybe context, which I assign to tasks which populate a Someday perspective
I currently have two main folders (areas of responsibility?), each holding two different types of On-Hold projects

How to review them separately? For the moment, only on the Mac app, by making have use of the Focus feature (just Focus on the folder I want, them go to the Review perspective.) A pity FOCUS is not yet on iOS.

I have a few other type of on-hold lists, under different folders

Thanks for the suggestion. I’ve seen a similar idea before somewhere, I think from Sven Fechner.

I guess I am a bit OCD about my OmniFocus setup, because I don’t like the concept of putting lists of projects into SALs. I figure I should try to use the SALs for actions only, and only use them to store someday/maybe project ideas if I can’t find another way to handle them.

I can understand that for sure.

To me, I have this reconciled by assuming each concept be an action that implies “consider delivering this thing”, where each item is then a thing to consider doing.

I don’t like the concept of putting lists of projects into SALs.

I had to go to the web archive to get to your article.

I see what you are doing. While you are working on your “big rock” project tasks you use a custom perspective which focuses on specific folders and shows only the active projects. The someday/maybe projects are hidden because they are set on hold.

But what do you do when you are doing a review?

Do you use the “Review” perspective? If so, do you have a way of filtering out the someday/maybe projects from the Review perspective?

Do you use the “Review” perspective? If so, do you have a way of filtering out the someday/maybe projects from the Review perspective?

Yes. I use the review perspective. My Single Actions Lists (SALs) such as Office Actions, House Actions changes a lot. These are my one-off tasks and it needs to get reviewed more frequently (usually every one to three days).

My On Hold projects are set to be reviewed monthly. I don’t need to look at these projects often. Sometimes I might set the review cycle to two weeks but that hasn’t happened often enough.

My Active projects are set to be reviewed on a weekly basis. But I can set it to a shorter cycle such as every 3 days if there are a lot of changes in the project and I need to update it more frequently.

My general review cycle is here:

Each project and SAL has a staggered review date. I’m not reviewing everything all the time.

Any project or SAL that has a lot of changes (daily or weekly) will get a shorter review frequency. This allows me to always be aware of any changes. Projects and SALS that do not have a lot of changes will be reviewed weekly or bi-weekly. Someday/Maybe projects are reviewed monthly of bi-weekly because I am not actively working on them. They are on the back burner. But I will see them in my review perspective and will consider activating it or keeping it on hold. When I change status from active or on hold, I will also change the review cycle.

Idea: what if you just set your Review perspective to show Available only, do your normal reviews, and then on a later stage, set it to show Remaining… would that be a workaround?

My situation is different since I am using an “areas of focus” folder structure for different areas of my life, and the folders can contain a mixture of both active an someday/maybe projects. (My someday/maybe projects are always on hold, and typically don’t have any actions underneath, just a project title, and maybe some notes in the notes field.)

Actually, your suggestion to use the Focus function sparked an idea for me yesterday - I hadn’t considered using it. But ultimately the idea didn’t pan out.

At this point I’ve decided to simply use the view settings in the Review perspective and set them to “Active” to first review all my projects that are no “On Hold”. After reviewing those I will change the view settings to “Remaining” and review the rest of my projects, most of which will be someday/maybe, but it will also include a few projects that are temporarily on hold or deferred. I’ll just live with the fact that the list won’t be purely someday/maybe projects.

Anyhow, maybe with tags in OF3 this issue will be solved, provided there is a way to do a focus on all tags that are not someday/maybe.

What I will probably do is use the view settings in the Review perspective. First I will change the view settings to “Active” projects, and review all of these which will be a fairly thorough review. Then I will switch the view settings to “Remaining” projects so I will see my someday/maybe projects (and also the few projects that are temporarily on hold or deferred at the time). This should be a much quicker review, where I can burn through them easily mainly just deciding whether or not I want to activate any.

You thought of exactly the workaround that I have decided to go with (I should have read this post before replying to you earlier).

Ideally I would like to review active projects and those that are temporarily on-hold or deferred as one lot. Then have a way of designating someday/maybe projects and review these as a separate lot.

Typically my someday/maybe projects are reviewed only to decide whether or not I want to activate any, so it would be nice to be able to separate them out so that I can burn through them quickly. Or, if I know that my plate is already full, just do a Ctrl-A and push them all off to the next review period in one fell swoop.

Yes, I keep my On Hold and Active project reviews mixed. The On Hold has a longer review cycle so I’m not too worried. If I see all the tasks greyed out, I know it’s an on hold project.

There is an AppleScript that lets you automatically reset the next review date of your projects. 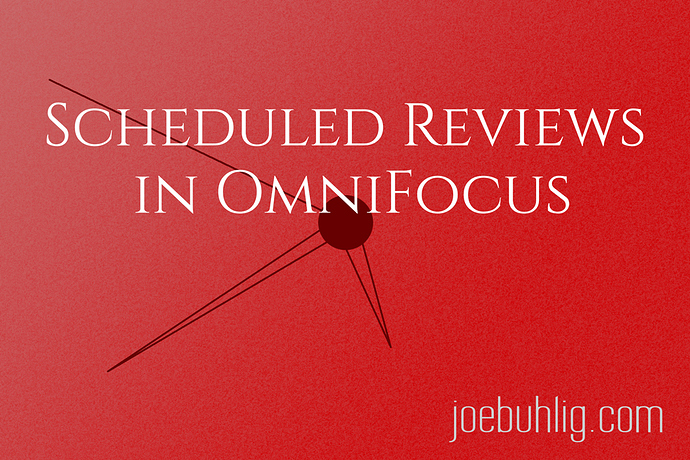