How to proceed with not urgent stuff

I have 264 overdue tasks (with assigned project to each task) since september 2019, when I opened the account. I follow GTD and Eisenhower methodologies but I’m in a situation that I don’t know what to do with all this someday/maybe tasks. All of this tasks are not urgent but, are they really important? How important?

I would like to know how to proceed at this moment.
Thanks

Forecast cluttered by Past Due tasks.mov

Screenshot (Forecast cluttered by Past Due tasks): 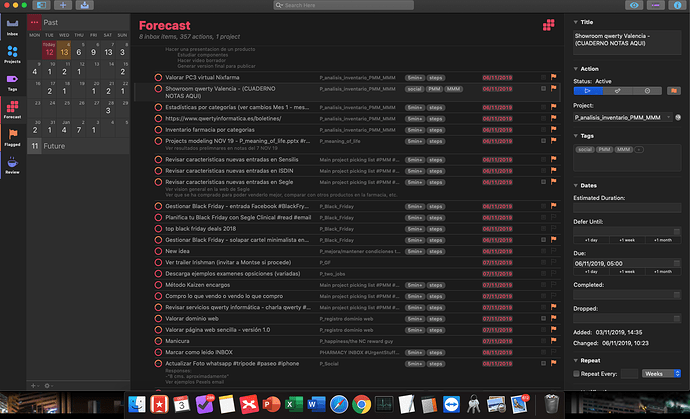 I have stopped using the U, I, and U+I priorities. I have no clue what urgent means compared to having a deadline, for example 5 minutes from now. Also, everything I generate has some level of “importance” or I would not include it in my list.

I have used variations of these Eisenhower matrix systems instead.

The first is a return on investment approach. The second is a “when you fly on the airplane, you put your own oxygen mask on first” approach.

I also use a different application (Curio) to do my project-level planning via Kanban boards.

I would get rid of those due dates cluttering up your Forecast. As you say they are not urgent, so they don’t need due dates. Just use due dates where there’s some external consequence if you fail to do it by then. Use flags or tags for your internal goals.

I had a hard time with the Eisenhower, mainly because tasks don’t always fit neatly into boxes. I have many work tasks that should be done in the near future, but don’t necessarily have a hard deadline. Urgent? And it’s hard to weigh importance. Everything at my job is important – if I don’t do it, I’m not doing my job! But clearly some things rank above others.

In general I think you need a few modes from OmniFocus:

That more or less covers three of the Eisenhower quadrants, the fourth being leisure activities you don’t put into OmniFocus.

I think the Eisenhower matrix was a fine model back in the '80s. It worked back then and maybe it is being strained now. On paper work, the theory is sound. But it starts to fall apart under the strains of today’s world where instant results are requested and insane demands are often required.

I’d also do as the above posters. Put due dates only on tasks that have material consequences if not fulfilled. My mind went numb when I had a bunch of overdue tasks and the red circles were screaming at me. I just tuned them out and they no longer had the desired effect of keeping me motivated.

For tasks and projects that I want to do, I am attempting to do time blocks. Keep appointments with myself and work on a group of tasks organized by context (at the office, on the computer, running errands, at the house, etc.). Or I can set aside a time block and work on a specific project. Mike Vardy from the Productivitist podcast likes to do themes. My Mondays are usually set aside for admin/office work. Tuesdays and Thursday are Big Rock project days for me. Wednesdays are reserved for meetings and running errands. Fridays are wrap-up days when I do weekly reports and do a weekly review to plan for the next week.

I don’t fill up every hour of every day but I use the themes to remind me to switch between different areas. Sometimes I can get ahead of myself and I’ll consider myself lucky. But that doesn’t happen often. Hyperscheduling (blocking almost every hour with something) was also a nice idea on paper but unusable in my work environment. I might have walk-in customers that can disrupt my plans. Thus, I’ll have one Big Win for the day (one task or project that I want to complete to consider today a victory). Then I’ll work on a few flagged tasks from a Big Rock project or work in a particular context (@Mac, @Phone, @Warehouse).

How is possible the score of 5 since the maximum values in these matrix systems is 4? Could you give a usage example?

The value of 5 (desire) is overflow. It is where I put stuff that is at a Someday or Maybe level. In the Eisenhower paradigm, it is stuff that is neither urgent nor important.

I’ve taken to using a hybrid method of action lists (through perspectives) and tasks I want to do that I assign a defer date.

Due dates are for things that ABSOLUTELY have to happen on a given day.
I actually prefer to have tasks with due dates on my calendar and not in OF.
That way I can quickly view important tasks on my calendar at the start of the day.

That gives me a list of at maximum 10-15 tasks in a “now” perspective I can accomplish during the day. If I can’t get to them I simply leave them there so I can see tomorrow what I missed and take the decision whether I still want to do them or not.

All other actions are not dated and can be viewed through 4-6 tag based perspectives
I use these to either set defer dates so they will show up in the “now” perspective, or to pick tasks I want to do at the moment. They’re usually actions that are not urgent.

I’ve copied some of the methods used by Joe Buhlig, and explained in the latest episodes of Learn Omnifocus 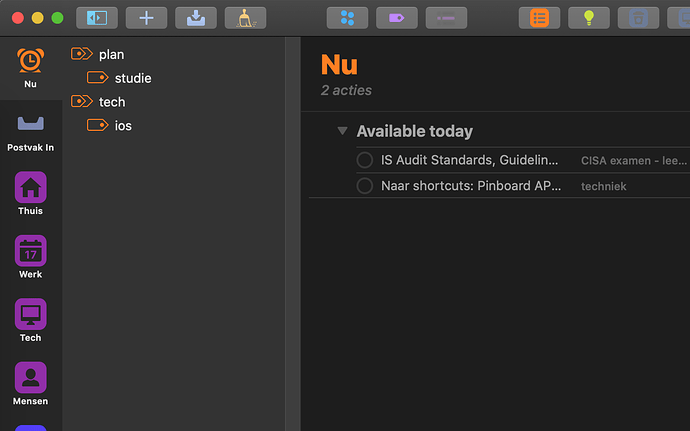 As you see I’ve removed the forecast perspective totally.
It does not add anything for my workflow.

I agree - get rid of those due dates. Also, I’m not in your head but those actions don’t look like ‘next actions’ to me. They look like things you have to think about some more (I end up with a lot of those as well btw - I think I’m making a next action but actually I am not giving the creation of the action enough attention l, for any number of reasons).
In my first few years of GTD (and I still drift that way) the habit of capturing everything was overwhelmingly and I ended up with about 60 projects and a totally unmanageable weekly review. My wife (god bless her) had to sit me down with my project list and say ‘do you have ownership of this in such a way that you can move it forward?’ And if I didn’t I deleted it. So, I would recommend either using that technique or sitting with someone who can objectively review this list and ask specific questions of each action.

For me, items which which are on the Someday/Maybe list never have due or deferred dates. I review the Someday/Maybe project once a month and cull ideas which I’ll never get to do, or move stuff into an active project.

I agree with the above, get rid of the due dates unless they are absolutely necessary. A few years ago everything of mine had a due date and I ended up hiding from OF as it just kept backing up!! Someday / Maybe Tasks don’t need due dates.

I like OF to dump things into, but I’ve started going back to basics on the steps taken to complete them. I found I had lots of ‘stuff’ that was never going to be completed, because it was far to vague. Particularly the someday / maybes or things that are languishing. I now break them down into mini-projects and get to an almost micro level of detail on how to complete them. Then, after investing 5 minutes mapping out the details, I’ll bash through them far more effectively over the next week. Based loosely on the SMART mnemonic I set a goal as a project, with the last task as the measure of success, once that’s complete, the project is done.

I keep a list / perspective called the dread list, and have a weekly task to pick off 1, create a goal and then complete it, one micro step at a time.

I also created a shortcut to build the same plan, with question prompts. When I have a few minutes on the train or waiting for something, I’ll often just pick a few random ideas and break them down, even if I don’t action them then, they’re ready to go if I find myself with some spare time.

I’m a lawyer. I have real deadlines that have real consequences. That has colored how I use OmniFocus.

First, all hard deadlines that have real-world consequences, work or personal, get due dates and reminders.

Second, commitments to clients and opposing counsel get deadlines and reminders. These deadlines generally can be moved out by communicating with others involved. The key, though, is prior communication.

Third, repeating tasks, such as updating mileage and other expenses. No real deadline other than before tax filings are due, but a real pain in the rear if I get behind. I set an arbitrary deadline, other than the end of the month, and keep on top of it until it is done.

Fourth, one-off tasks that are due way in the future, I break into a series of tasks over the lifetime of the project that force me to get more and more involved the closer I get to the hard due date. No need for last minute panic.

Fifth, everything else gets logged into OmniFocus and tagged, but no due date. I look at those tasks weekly, and occasionally delete one or add a due date date to one. The list changes over time, but I don’t freak out over it.
The key is to get rid of those due dates for tasks that don’t really need to be done at any certain date.

Your job is to accept responsibility for your life and your action list. As Steve Jobs, a founder of Apple, said, “Focus is saying no to 1,000 good ideas.”

Hi bpearce1, why do you like so much tagging? What do you think about including the new tasks/ideas in existing projects or new more specific projects? Leaving these new actions in a someday/maybe folder or just tagging them could result in forgetting important ideas.

If it’s really a bridge on your route you will come to it anyway.

If it isn’t really on your route, then it’s just a distraction.

It does take courage, but it’s your duty to file most things in 🗑

Do you have a someday/maybe folder?

Do you have a someday/maybe folder?

No, I don’t have one of those.

What may help more is putting a lot of work into better developed destination document. (The work of weeks and months rather than hours and days).

if you really know where you’re going (and have a map or 3 paragraphs on the wall to remind you) it gets much easier to intuit whether things are really on the route (or nothing more than detours and distractions).

Tagging? I have an extremely anemic tagging system.

All of my tasks are sorted by projects. A few also are tagged, but I work in the Project view all the time.

The issue, though, remains the same–either you wind up with a bunch of past-due items or you wind up with tasks that don’t get done. You have to figure out a way to accept responsibility for, or peace of mind with, the consequences.

Most tasks that are that much overdue can be deleted.

If not, it means you have been abusing the due date field for something that is not a due date.