I’ve been sharing my Omni database across a Mac and two iOS devices for a long time now. I regularly archive items on the Mac using File | Move Data To Archive, but for a long time now my iOS devices have shown me a red dot on the Settings gear, because they think that I have a bunch of old completed items that need to be archived. The Mac says that there is “Nothing to archive.”

I’ve tried a few things to get around this… Just now I, “Moved old items to archive” on the Mac, I rebuilt the database on the Mac, I replaced the server database with it the Mac’s. I even uninstalled and reinstalled OmniFocus on one of the iOS devices. But none of this seems to make a difference.

Any ideas? This is really a pretty minor annoyance, but I’ve love to see that red dot go away!

The image above didn’t seem come through… Trying one more time: 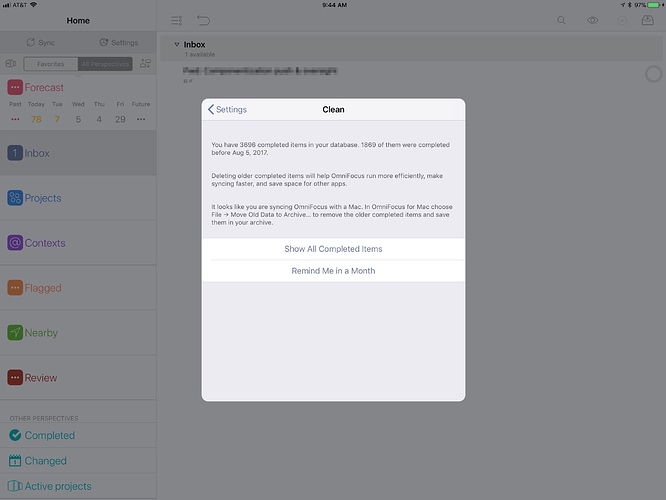 Hey @jamie! I’m sorry about this — I know how irksome extra badges in an app can be.

When you archive on the Mac, what “cutoff” date do you choose? It’s possible to set the archive date pretty far back on the Mac, which would lead to that “nothing to archive” message you see, but still leave completed tasks for the iOS “Clean Database” dialog to find.

I aways keep the default, which is always the “first of the previous month.”

Interesting! I would have expected that archive to catch all the items that the iOS app is warning about.

Do you mind posting a screenshot of the archive panel on the Mac?

Sure, here it is!

Like I said, I’ve never touched the date in this panel–I’ve always used the defaults.

This is a pretty unusual case! If you haven’t already, could I ask you to write in to our support team, including a link to this thread? We’d like to make sure we track this properly, and hopefully diagnose a little more information. Thanks!

@jamie was kind enough to send in an anonymized version of their database; it looks like the prompts the iOS apps are putting up are actually correct. The database contains a significant number of items that were completed over a year ago but don’t get detected/archived in the Mac app.

Mentioned this in passing to a different member of the engineering team - they’re doing some other work in this area and will take a look. In the meantime, it’s been filed as a bug so our test folks can try to narrow down exactly why the Mac isn’t detecting/archiving those items.

Customer sent in an email which linked to this thread; posting a note here to help anyone that reads it in the future.

In a situation where the Mac app doesn’t appear to be archiving everything that it should, it can be helpful to check the project list for projects which aren’t expected to be marked complete/checked off… but have a repeat set.

To avoid stripping actions out of the next iteration of a repeating project, the archive tool will leave completed actions in place and wait for the whole project to be marked for removal. Particularly in cases where the repeating project contains actions set to repeat, this can cause a large number of completed items to accumulate in the database.