Is it possible to turn off "Captured by OmniFocus" list? Causing problems on capture

I’ve read through Omni’s explanation of why they added the “Captured by OmniFocus” reminders list for Siri integration. Here’s the documentation, but the short of it is: only Reminders can read “Remember This” deep links, so to preserve that data any reminders saved with Siri will get moved to the “Captured by OmniFocus” list and marked as complete.

The trouble for me is that I save everything to a list labeled OmniFocus. For example, on my Apple Watch, if I say “Hey Siri add cheesecake to omnifocus list,” instead of adding “Cheesecake,” I’ll be prompted to pick which list I want to add it to, either “OmniFocus” or “Captured by OmniFocus.” If I say nothing, the reminder just disappears.

Is there any way to turn off or rename “Captured by OmniFocus” to avoid this confusion?

Ignore the fact that I have two of these listed. Separate issue. 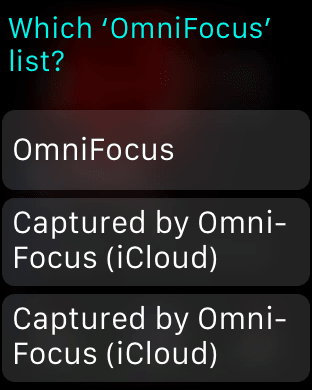 Hey there! Sorry for the trouble. At the moment, you can’t rename the Captured by OmniFocus list; however, you can rename the OmniFocus list to something else unique, reselecting it in OmniFocus afterwards to keep Reminders Capture going.

If you’d rather not deal with the Captured by OmniFocus list at all, and you’re sure you won’t use the deep links functionality in reminders to be captured, you can revert to the old behavior of deleting captured reminders with a preference URL:

That works for me. Thanks!

Thank you for the question and the fix! I just wish my Apple Watch would go back to recognizing a list called OmniFocus. 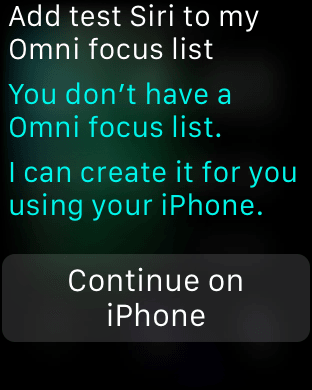 Excellent! Thanks so much for this.

Since it’s unlikely that Apple will enhance the deep linking access in reminders before iOS 10 (if even then), it might be a good idea to turn this into a real preference, defaulting to on and possibly accompanied by a warning when switching it off. While it’s great to err on the side of caution, I can’t see too many people really wanting to use the “Remember This” deep links if they’re not going to be translated into OmniFocus anyway. In that case it makes more sense to avoid them entirely, or just use a separate list in Reminders that’s not copied into OmniFocus in the first place.

Yeah I’m with you, @jdh. I can see the eventual usefulness of the deep links, but it’s going to be a long time before that sticks for me. Usually if I’m entering via Siri, I do it through my Apple Watch. If I’m already on my phone and I find something interesting, I’ll use an extension to get a link back to it via OmniFocus.

The trouble is that two big places that involve remembering things are Messages and Mail, neither of which has extension support yet. If I really need to get an email’s link into OmniFocus, I’ll bounce out of Mail and go to the Safari version of Fastmail, navigate to my message and then hit the OmniFocus extension. (Illustrated explanation on Macdrifter.) It’s not ideal but it gets the job done.

“Remind me about this” in a text message could be interesting, but the truth is that a text message usually lacks enough context for me anyway. It’s stickier in my mind to say “Remind me to [do the thing my girlfriend told me to do in a chat]” then to have to refer back to the conversation. But maybe I’m thinking too small about where deep links will be useful.

Can we not have this in our task note? It really is not a note about the task.

I second this. I generally use the status of the “note” button to indicate whether there’s an important note associated with the task, and in this case the note that’s in there isn’t important at all, yet makes me check :)

In the meantime, I think I’m going to need to cook up an AppleScript to go through and remove these extraneous notes…

I actually found another solution in this thread that allows you to turn off the “Captured by OmniFocus” list entirely by using a hidden preference.

Obviously it’s not a perfect solution, as it requires that you’re willing to live without the “Captured by OmniFocus” list entirely and just have your reminders deleted outright once they’re captured (basically, the way things worked in prior versions of OmniFocus, to be fair).

However, it definitely works for me as I have no need for the deep linking features of “Remember This” right now – if I wanted to use those, I’d just be using another list the Reminders app directly, since there’s no point in capturing them if I can’t view them in OmniFocus anyway.

I tried the deep-linked reminders for a while, and found them to be such a half-baked implementation I probably wouldn’t use them that often even if I were using the Reminders app instead of OmniFocus.

The biggest issue for me is that the one thing I want to set a reminder for most often – emails – aren’t supported in any realistic way at all. The only way to set one is to tell Siri to “Remember this” and that’s not always convenient even when I’m on my iPhone, and completely impractical when I’m on my Mac. By comparison, I can capture an email into OmniFocus by hitting CTRL+T, courtesy of FastScripts and an AppleScript that handles the capture.

Your FastMail trick is a clever one, which ironically I hadn’t really thought of – I once tried that with Gmail back in the day, but the problem there is that Gmail’s mobile links don’t work on the desktop, and vice-versa, so I gave up. Since I’m rarely away from my desk for more than a few hours at a time, and most things relating to an email can’t get dealt with until I return anyway, my workflow now is to simply leave things in my Inbox until I get back to my desk, or if I know I’m not going to get to them until tomorrow, I flag them and archive them (I then have an AppleScript that runs first thing every morning which moves all red-flagged items back into the Inbox – I use the other flag colours for everything else).

Deep linking into third-party apps, on the other hand, has the potential to be much more useful once it can be implemented properly. Firstly, many other apps (including things like Mail and Safari) will allow “sharing” to Reminders from the iOS Share Sheet, even on OS X, so you’re not stuck relying on Safari. Even then, however, sharing to OmniFocus works just as well if you’re only going to use the Share Sheet anyway; it’s not as pretty in that you don’t get the cute little icon beside the task, but everything you need will still be in the note.

This also works – with Reminders at least – in other apps like Pocket, Pixelmator, and PCalc, to name the few that I’ve tested, but doesn’t always translate into links in the OmniFocus Notes field, which is unfortunate. I’m not sure if Reminders is using an API here that’s only available to Apple apps, or whether OmniFocus simply hasn’t been updated to take advantage of it, but it would be nice if the OmniFocus share extension could capture the same information that Reminders does. The approach seems to be to use the same URL that’s passed between iOS and Mac devices via Handoff, which is why any app that supports Handoff also supports “Remember This” in Siri for Reminders capture, but sadly like Mail, not all of them support the iOS Share Sheet.

Is all of this stuff new? I used to rarely get those tasks that I had spoken to Siri come up in the Reminders app. Now, they seem to be coming up in Reminders all the time, and the tasks in OmniFocus have that additionally information in the “Note” field. This Siri integration with OmniFocus seems to have gotten much worse.

Yes, it’s definitely a new feature as a result of iOS 9’s new deep links that can be added to tasks in Reminders. Basically, if you say “Remember This” from an email, messages conversation, or something else, a link will be added to that new task in Reminders that OmniFocus is not only unable to capture, but also unable to even determine that the link is there in the first place.

So, to err on the side of caution, Omni obviously decided to preserve all tasks imported from Reminders, since otherwise users would risk losing information – the tasks in Reminders would be removed, along with the deep link into the app that was created in Reminders and couldn’t be brought into OmniFocus.

If you don’t like this behaviour, the post by @tekl above explains how to disable it with a hidden preference setting, which is what I’ve done. You’ll risk losing tasks with deep links by doing this, but if you never use Siri’s “Remember This” feature, that won’t matter.