Let them use iPads

Does anyone at Omni ever use a 12 or 13" MacBook, without an external display?

Installing the beta on my 27" iMac was a better experience: the same sidebar and headings seemed not so dominant, given a larger window on a larger screen, but I’m reliant on my MBP’s display for half of every week.

I remember Ken Case’s “sweet solution” to the removal of the Inbox from the Projects list in OF2 was ‘just open another window’, which was and is much more practical on a large desktop display than on a compact laptop screen.

I’ve just been reading about the difficulties people have with fitting OF windows into splitscreen, which leads me to suspect that OF for Mac is developed on 27" or greater displays, without much testing on standalone MBPs.

I’ve been working well on my MBP 13". I use multiple tabs instead of windows to consolidate needless windows. But then again, maybe I’m not the type of user who uses multiple windows in one app. I will use multiple windows from different apps (OF on one side and Calendar on another).

if I need to, I can change my MBP 13" resolution from the standard 1440x900 to the 1680x1050 resolution using one of those menu bar apps that gives me quick access to my screen resolution settings. I’m out of the office right now so I can’t remember the name of the menubar app but there are solutions available to get quick access to resolution changes.

This has been a topic that was answered by one of the Support Humans in the Slack channel somewhere. They are considering a setting to change the panel to a dark and light mode. This will be in a post V3.0 release.

I don’t mind the dark panel because the attention is brought more to the main outline instead of the left panel. Fantastical, Tweetbot, and some other apps are adopting the dark panel look as well. YMMV

I have no problem on a 13" MacBook Pro it all looks fine to me, the sidebar is easily hidden and I have BetterTouch Tool setup to show my most used perspectives on the Touch Bar.

No complaints at all, and I also have OF running on a HD screen on a MacMini which I use for some work again its fine. I prefer both full screen I have to say.

So there’s no problem because you can run the MBP at a non-default resolution, hide default OF interface elements and pay for another app to compensate?

Thanks, guys: I think you’ve made my point for me. 😃

There’s nothing wrong with using a mixture of tools to get a personalized setting.

And I’m very glad I can personalize OF to suit my needs. OF3 on the iPad allows me to choose whether I want the left sidebar to collapse or stay pinned. It also allows me to choose whether I want the inspector panel to collapse or stay pinned. Nothing wrong with customization. Everybody customizes their apps. I customized Microsoft Word’s default toolbar icons to match what I want. There’s nothing wrong with that. I want to customize my toolbar, my favorite perspectives. I want to have AppleScript support so that I can have an AppleScript do something specialized that isn’t a feature that the general customer market wants.

…pay for another app to compensate?

I’d rather having a mixture of tools (either paid-for or free) to get my job done.

People have found other apps such as AppleScript, Better Touch Tool, Siri Shortcuts, Drafts, and Keyboard Maestro as valuable tools that provides more benefits to allow us to customize any app to suit our personalized needs.

Nothing wrong with that.

Thanks, guys: I think you’ve made my point for me

I don’t mind the dark panel because the attention is brought more to the main outline instead of the left panel.

Well, if that would be the case with ”the unnecessary neon headings”, as @ldrydenb aptly characterizes the left part of the sidebar, I might find the sidebar acceptable, even though white project names on black background is less convenient to read, but the headings scream for attention all the time. Black background, ok, but I simply can’t understand why The Omni Group throw away the unobtrusive solution in OF 2, where only the selected heading is colored, making it very clear which perspective that is in use. In OF 3 all headings seem to be selected all the time, and it just gets worse with dark grey background on black as the only indication in that column of which heading that is chosen.

Send an email to OmniFocus@omnigroup.com to send in suggestions and a draft mock-up of what you would like to see.

No need for a mock-up – I just want The Omni Group to preserve a well thought-out, already existing solution. Suggestion already sent, though – as always.

And I’m very glad I can personalize OF to suit my needs.

UI font size in OF3

The theme editor was left behind with OF2.

The theme editor was left left behind because not as many people were using it. If one noticed, there were a small handful of users creating themes. Everyone else just downloaded them instead of creating their own.

Omni decided to focus on the main OF3 app instead of putting more resources into the theme editor. They did say that if they see any feature requests for the theme editor, they would consider bringing it back.

Sarcasm noted 🙄. If you truly wanted some features, send in a feature request to omnifocus@omnifroup.com. If there are enough people that feel the same way, the developers will consider it.

How do you know users weren’t editing themes without sharing them? And besides, the pattern of a few users creating the majority of publicly posted customisation is absolutely typical of every program under the sun and hardly a reason to remove a feature.

I don’t really care about editing theme in any detail but it would sure be nice not to have such a low contrast between note font and background in dark mode.

I use multiple tabs instead of windows to consolidate needless windows

Wow never realised OF 2 had allowed for multiple tabs all this time. 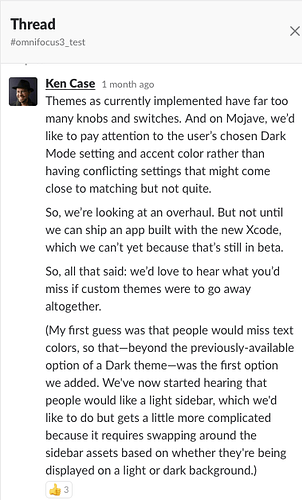 There’s his reason… Omni just closed and archived them #omnifocus3_test channel earlier today because OF3 was just released.

If you really want to voice your opinion, email omnifocus@omnigroup,com

The link for the above message is

it would sure be nice not to have such a low contrast between note font and background in dark mode.

Yes, I agree. I sent in my email vote for this as well. I also wanted my note text at a larger size.

I disagree I have “made your point” I can use built in keyboard shortcuts to switch perspectives or close the side bar, all of which is built into OF. I choose to use Better Touch Tool because its support for customising the Touch Bar is pretty nice, but I don’t “need” it, its just a nice little extra. In fact I do use the keyboard on the Mac mini which of course has no Touch Bar.

My only real niggles are the dark mode which really is not very good, contrast is low and dividing lines are too bright IMO, oh and I would like the ability to filter to show tasks just on certain tags, ignoring the other tags which a task may contain but I manage OK without it, but it would be nice.