Making annotations or notes in a sitemap

I am making a sitemap and I have auto-flow on so that I can make my sitemap easily and automatically by just typing in the headings and have omnigraffle create the sitemap for me.

BUT If I add a layer and write up some accompanying notes… the notes somehow become part of the sitemap and they flow into the sitemap which looks horrible obviously. I can imagine it is a simple fix since it doesn’t make a lot of sense to include notes in the sitemap so can anyone else me with this please.

I have included an image to explain.

The first image is what happens with auto-flow of the sitemap. lol. 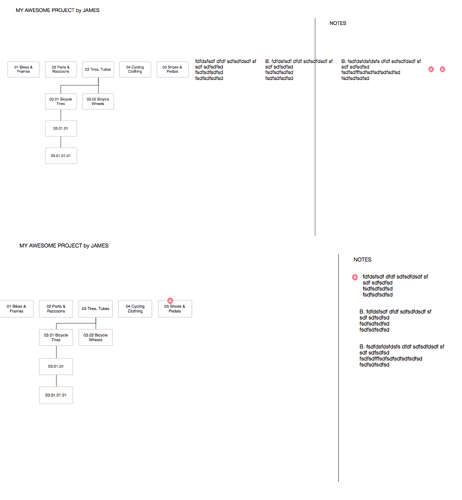 Have you tried adding your annotation to a shared layer? Shared layers aren’t impacted by auto layout, so this would exempt the contents of that layer from being arranged as you continue adding contents to the canvas.

I hope this helps!

Thanks for answering.
Yes I tried both of those.

The shared layer works. I originally thought that it doesn’t make sense to add a shared layer to a canvas if you are not going to share the layer with other canvas’ but then realise that this solves the problem in a hackie sort of way but none the less.

The second idea also works but is much too much trouble to do and involves a perfect world scenario which we all know does not exist.

So thank you I will go with option number one until Omni Group realise this bug.