Maybe I’m just a big dumb idiot, but am I the only one who is wondering why there are so few options for filter rules when creating a custom perspective?

I’m confused why the dropdown just lists all the things the developers think you would need to create your own perspective, but lacks the flexibility that most other macOS apps’ advanced search filters include. For example, why are there only four options for estimated time filters? Why can’t I choose to filter by “Estimated Time” then enter manually that I only want tasks that are less than 12 minutes? What if I want to see tasks that have an estimated time of under 2 hours? Right now, as I understand it, you can only choose to filter tasks via their estimated time with less than 60, 30, 15, and 5 minutes. And it seems that it’s currently impossible to filter tasks and see only ones that don’t have estimated times entered. Why is that?

OmniFocus is the only app I’ve come across that doesn’t allow you to manually set up those kinds of filters. Mail.app, DEVONthink, Outlook, Finder.app, heck even the Spark app has more advanced and customizable search than OmniFocus does.

Please forgive my soap box, I still love and use OmniFocus daily, but it’s always befuddled me why an app like OF has such limited custom perspective options. I hate Todoist, but they’ve got very advanced custom filter options. 2Do has very customizable options as well. I guess I’ve always seen OF as an app that allows you to use it as simply or as with much complexity as you’d like / your work demands. It works wonderfully in that regard in almost every other aspect of the app – but then there’s custom perspectives… They just seem so… not custom to me.

I’d love to hear that I’m just missing something obvious, or other workarounds, but I’d also be happy to simply commiserate with fellow OF users who feel similarly. ♥️

I’m going to guess it’s gonna come a little further down the road, hopefully next year?

Omni is developing the iPhone/iPad app first. Version 4.0 will mostly be UI changes with no big database changes that will break compatibility with OmnIFocus 3 for Mac.

I reckon that when OmniFocus 4 for Mac is released, we’ll see the ability change the filter perspectives. For now, I don’t think the developers want to break compatibility between OF3 for Mac and OF4 for iPhone/iPad.

We’ll probably see a new warning message that will ask us if we want to upgrade to the new database engine which will most likely break compatibility with OF3.

This did happen fairly recently when OmniFocus introduced floating time zones. That update broke compatibility with earlier versions of OF3.

We’ll hopefully see improved filter perspectives after OF4 for Mac is released!

Let me get this our first, I don’t really find OF custom perspectives restrictive at least for my needs.

I am not sure that allowing the construction of advanced filters via some form of cut down regex system would be worth it for the take up rate amongst all but the nerdier ones amongst us.

I agree it’s potentially more powerful but also a hell of a lot more complex to set up. Fo example in 2Do which has no filter by tag groups, to construct an Eisenhower Matrix you need to construct a filter such as

and if you wanted to include all mail and calls ( which I do not tag with the Eisenhower system) it’s very soon getting unwieldy, then incorporate filtering by folder… you get the picture?

In OF just include a few tags or exclude folders via a few drop down boxes and your done. I understand the extra power possible I am just not sure if more complexity is what OF needs.

And it seems that it’s currently impossible to filter tasks and see only ones that don’t have estimated times entered. Why is that?

There is the ‘Has an estimated duration’ rule! You can put this inside a ‘None’ rule group (Option-click the ‘+’) to exclude them.

That’d be great, I sure hope so!

I definitely see where you’re coming from and I agree that adding complexity just for the sake of it is counterproductive.

However, (and maybe I’m just amongst a small minority of nerds), I’m quite easily able to construct immensely “complex” searches in apps like DEVONthink in a couple minutes using the drop down options in the advanced search area. And honestly, they’re probably not even that complex – just basic stuff like including or excluding something, setting a custom value for filters that use numerical data, etc.

The vast majority of power user apps I’ve used on macOS have had these exact abilities to craft advanced searches – all with identical UIs even. So, while I’m not a developer, it makes me wonder if there’s some native resource within macOS that developers can plug into their app if they so choose.

So, like @wilsonng said above, I don’t think it’s necessarily a choice by the OF devs to intentionally not include this, but rather them trying to maintain perspective compatibility between OF2 and OF3.

Anyway, here’s to hoping they’ll add a few more options in OF4 for macOS+iOS!

Ken Case has mentioned in the past that he’d like to add some more capabilities to custom perspectives. I think it’s just a matter of needing to prioritise enhancements for the available development time. We got Automation in the OF3 generation, which can solve many user-specific workflow needs, and that must have been a large undertaking. I think the current focus on the new iOS client based on the latest platform tech is the right priority.

Second that. I, too, find the “prefab” predicates too restrictive and miss a more SQL-like language. “Select all tasks that match X, show them in a tags perspective, group by tag, filter by ‘Today’”. Not possible. And so forth. It’s a constant struggle to get your system to work for you.

Another example of restrictiveness: only one flag. Sometimes you need more, so as not to affect existing flags.

On the other hand, OF is too unrestrictive for novices! It’s difficult to get started and I’ve wondered for a long time why it doesn’t ship with a couple of “standard” setups out of the box to get people going. More users would benefit all of us.

why it doesn’t ship with a couple of “standard” setups out of the box to get people going. More users would benefit all of us.

Yeah, I’d love to see this. But it’s gonna be a bit difficult. OmniFocus is an open-ended app that allows you to build your own workflow. Many of the other apps already have their opinions and will guide you through their method of thinking. It’s easier for a beginner to start with some hand-holding and that’s what makes many of the competing apps a good solution for beginner.

OmniFocus is open-ended and it will be difficult if you don’t already have a system in place. It took me a long time of experimenting with my structure before I settled on something I’ve been able to rely on. I’ll tweak it over time to fit new circumstances as well.

There are a lot of resources available that are both commercial and free. If you want to shortcut your way into a system, it’s best to check these out and take what you want/need from them. You’ll eventually create your own workflow by taking from others.

The commercial packages are excellent. It’s like getting your own personal fitness trainer. They can guide you so that you don’t have to do as experimenting and going into different rabbit trails. 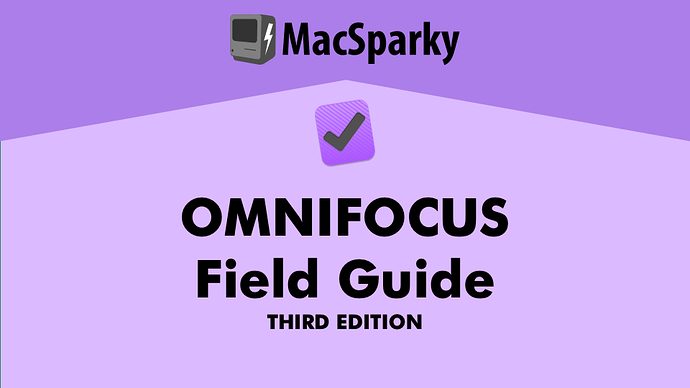 If you learn better from watching videos, this is a good place to start.

Creating Flow with OmniFocus from @Kourosh 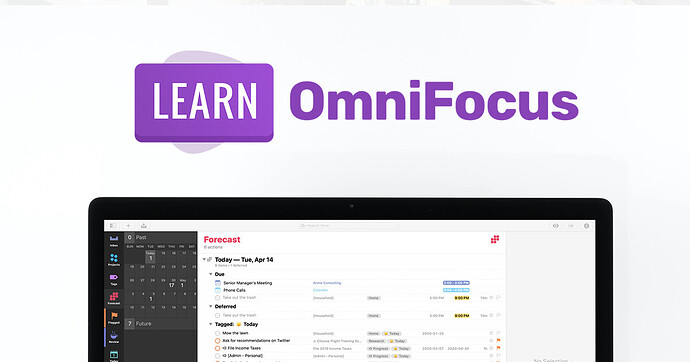 Live a fulfilling & productive life with some help from OmniFocus. Articles, videos and webinars.

A beautiful site that features many free YouTube videos of OmniFocus users from all walks of life presenting their workflows. The optional membership also allows you to join in on live casts featuring many advanced issues regarding OmniFocus and productivity such as combining OmniFocus with other apps such as DEVONthink, mindmapping, Shortcuts, and Hook.

This is a book we’ve written for all users of OmniFocus, from those taking their first steps with the app to those who are experienced and familiar with it. Irrespective of where you fall on this s…

A solid book with each chapter building up into the next chapter. Build a workflow foundation with this book and you’ll be on your way.

I’m not affiliated with the above resources but these are a good starting point if you want to shorten your learning curve.

I’ve watched/read them all over the years. In my opinion they are essential in getting the wheels moving at the beginning. I’m sure many people have taken ideas from all of them fro their own system. Highly recommend Tim Stringer’s LO.