Multiple views of a graphic and text

The graphic I’m drawing is usually referenced to True North. However, to simplify the the profile view, I have rotated the main drawing so it goes horizontally across the paper instead of diagonally. It would be nice to be able present the final drawing in both views but text is an issue. How do you manipulate the main drawing without it rotating the text (or other graphcs)?

I could select each layer and rotate it. However, when rotating the text, they would not maintain their position but would move about the center of rotation (center of the drawing).

I am told using a “linked file” (guessing this is an Illustrator thing) can address the problem but I have not idea what that is.

You can set the Text Position to Absolute, and then rotate the text and shape to different degrees as needed. 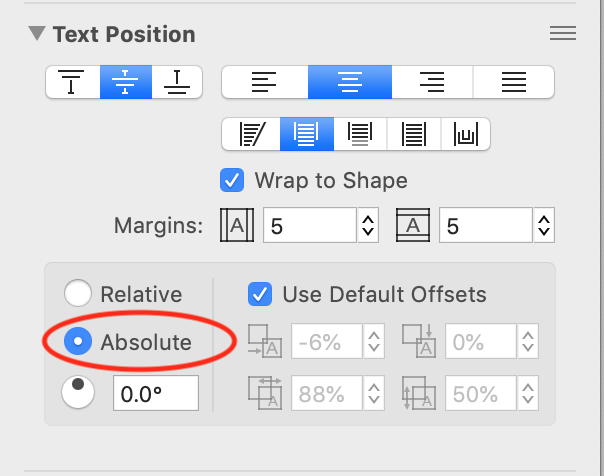 That is pretty cool!

Okay. Trying more and I am getting various behaviors and I don’t know why. I have seen the following happen with some text (absolute) and a square:

I’m not sure what I am doing differently to result in the different behaviors.

Really like this feature though (once I figure out what I am messing up ;-)

As an aside, is there a way to do something like an artboard link to another canvas? For instance, in one canvas I have the drawing in one direction. I add an artboard at a certain angle then create a new canvas with that artboard showing up straight (not at same angle). Almost like I could put snapshots of various canvas/layers onto one canvas.

Probably an extremely complicated thing but there is already so much I am learning and outstanding features, thought I would ask.

Sure! If you select your Artboard, go to the Properties inspector, under Action, pick Jump To, and then specify the canvas that you want. Then you can use the Action tool to jump from the Artboard to another canvas. Hopefully that was clear, but check out the section on Actions named Making Objects Interactive with the Action Inspector ( PRO ) in the OmniGraffle Help if some images would help explain that more clearly.

Hmm… I see how that works but was hoping I could use the ArtBoard as a live link (with object view intact) on another canvas. Let me see if I can explain, because it is a bit involved.

I produce a large drawing and use ArtBoards to segment the drawing (visually) into segments.
On another canvas, I add an object that brings in each drawing contained in an ArtBoard (almost like a view port on the drawing). The objects are not directly editable. Your have to go back to the source canvas/layer.
Now I can add other layers to this canvas to provide a different perspective on the drawing… and may add more ArtBoards to segment the drawing (it’s a big graphic - currently 100" and should be three to four times larger when done).

Does that make sense? Each ArtBoard provides a view of the graphic and the view port can be rotated or scaled without affecting the source graphic.

FWIW, I don’t know of any program that does anything like this. Maybe a CAD program

Yes. I believe you can use LinkBack to do most of what you describe. Copy as PNG (or Copy as PDF or whichever format works best), and then paste. You’ll get an option in the gear menu in the Image inspector where you can choose Edit in OmniGraffle. That will link you back to the original without impacting the original, but you can still edit it later as needed. Hopefully that will suit your purposes!

You would need to make 2 separate graphics and group them so that you can rotate one part and have the other part stay upright.

I didn’t see a setting similar to text to maintain position. I could keep them on separate layers, rotate one, the move the other graphics to where they need to go.