I decided to share my current setup and workflow, might be useful for some beginners who are familiar with the Getting Things Done methodology. First, here’s my workflow: 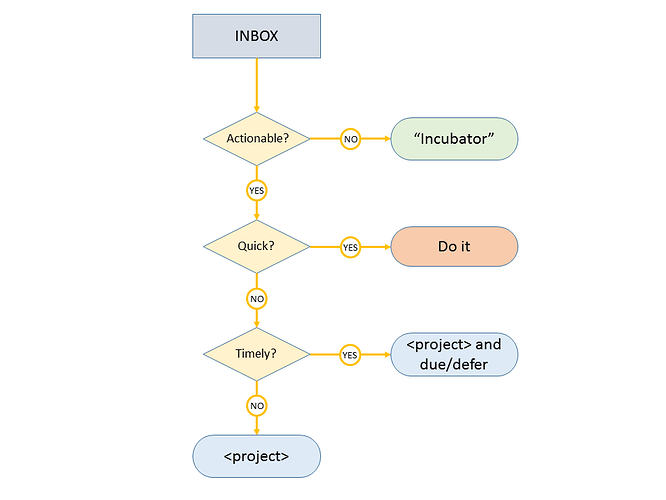 Basically, I have a short and simple workflow that covers most cases, rather than a complex one that covers all possibilities but you (or at least I) never want to look at and end up not using. I don’t do horizons, at least not yet, so I keep it fairly flat (not too many levels of folders).

I look at each item in the Inbox and ask if it’s something that needs to be done, or if it’s someday/maybe. If it’s the latter, it goes in the Incubator, which is a folder inside the Projects perspective akin to David Allen’s “tickler file”. The “wastebasket” is obviously just the Delete function, right in the Inbox. As for the “reference” folder, I keep those outside of Omni Focus, since I don’t use the software for data storage.

If the item needs to be done, but is not actionable in its current form, I break it down into actionable steps on a separate list. The reason I don’t have this procedure in the workflow is because I generally input my Inbox items that need to get done in a form that is somewhat actionable (“change oil” vs just “car”), so for most items in the Inbox the question “is it actionable” is good enough for determining whether to process it further or store it in the Incubator.

Next, if it is actionable, I apply the two-minute rule, but it’s really more like, “can I do this quickly in the current or a nearby context?” If yes, then I (try to) just do it then. If it doesn’t pass the test, as most items do not, then it goes into one of two places: a “Single Actions” folder in the Projects perspective with type set as “Single Actions”, or to a specific project folder if the action step is part of a project (create it on the spot if it doesn’t exist). In each case, I ask if it needs to be done by a certain date or not, and set the current due/defer options accordingly. If it does, it obviously ends up in Forecasts (GTD’s “calendar” container), otherwise remains as an undated action step (“next actions” container in GTD).

In my case, I don’t use “Waiting for” lists since my lifestyle doesn’t require it at this point, but when it’s needed, the “Waiting” context is just fine.

Finally, everything that is actionable (not in the Incubator) gets a context, as they are at the foundation of actually accomplishing those things.

So that’s the basic structure: one folder for Incubator at the top, one folder called Single Actions below it, and a bunch of other folders for the various projects below that, all in the Projects perspective.

Good job of illustrating the first part of any productivity system; capturing…