No longer seeing the omniJS console icon in iOS omniGraffle 3

Has access to the omniJS console in the iOS omniGraffle 3 test version been withdrawn for the moment – or am I just failing to find it ?

(There was an icon in the previous build, which I am no longer seeing, but I may just be missing something …)

Sounds like your trial mode got reset to Standard somehow. To switch back to Pro, open the gear menu in the Document Browser and tap the “Trial Mode: Try Pro” item just above “In-App Purchases”.

Reinstalled, went into ‘In App Purchases’ and tried ‘buying’ Pro mode again, but this build now seems to be in a ‘crash on launch’ condition - not sure if that’s my hardware, or some misstep on my part, or perhaps a build glitch - so I’m not getting further for the moment - I’ll wait for the next build.

The new build just now has fixed the crashing - thanks !

But, I am still not seeing the scripting console icon unless I open the Professional Features template.

Have repeated the cycle of ‘buying’ the Pro version a few times, but this doesn’t seem to yield a change. Any thoughts ?

(Still no Trial Mode:Try Pro item in the Gear menu of the Document Browser.) 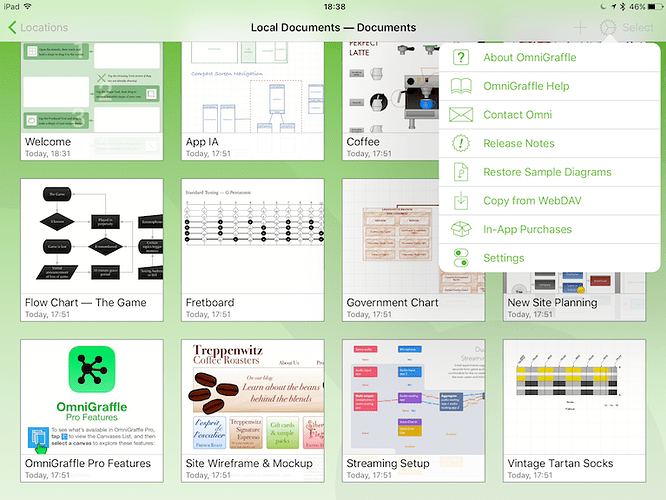 Have repeated the cycle of ‘buying’ the Pro version a few times, but this doesn’t seem to yield a change.

Could you share a screenshot of the In-App Purchases screen?

Could you share a screenshot of the In-App Purchases screen?

Never mind, I’m able to reproduce the problem. Working on a fix!

It turns out there’s some issue with In-App Purchases in TestFlight builds that started happening yesterday (according to the Apple Developer Forums). If you’ve already successfully purchased something you can restore that purchase, but if you try to purchase something it doesn’t work.

Hopefully Apple will fix that problem soon (it’s filed in RADAR), but in the meantime our next TestFlight build (r283952 or later) will automatically start out in Trial mode with Pro enabled so you can get back to testing without worrying about this.

Thanks for chasing that – I look forward to the next build.

Am I right in thinking that there isn’t yet an OmniOutliner iOS build with OmniJS ? Or perhaps I have missed that …

Am I right in thinking that there isn’t yet an OmniOutliner iOS build with OmniJS ? Or perhaps I have missed that …

You’re right, it’s not there yet. The OmniOutliner team’s attention has been focused on OmniOutliner 5 for Mac, so the only changes in the current iOS TestFlight are the minimal changes needed to add support for the new v5 file format.

(We do have a separate development branch of OmniOutliner for iOS that includes OmniJS support, but I don’t yet know when it will be stable enough to be ready for an external TestFlight.)