I wonder if anyone else is experiencing this sidebar bug or finds it very annoying in his/her workflow. I emailed OmniFocus support about this bug in October of 2017 (almost a year ago) and it was ruled as a known bug (implying it would be fixed in the future?) yet it was not fixed in version 3.

Has anyone else experienced this bug? Has anyone discovered a work around for handling it (other than adjusting system preferences, of which will affect too many others apps one might be using)?

I have a MacBook Pro, so the resolution is fairly high making it’s harder to trigger the bug without multi-tasking, but on my MacBook Air it is far more prevalent and disruptive; especially if you have many perspectives (as many of us do).

Just to clarify/demonstrate the bug:

It seems that if your Mac has the setting for “Show scroll bars” set to “Always” in “System Preferences -> General” then you get an interesting little bug when the height of the OmniFocus window is smaller then the height of the perspective sidebar (while it has X number of perspectives) and you go to the Inbox. The entire perspective sidebar gets jaunted to left via the scrollbar mechanism being visible when it shouldn’t be.

It appears this bug is compensated for or covered up via other views having the additional sidebar extension (for projects, tags, etc.) be visible and the scroll bar being added into that UI element’s space.

Coincidentally, as I wrote this post, I discovered if you swap back to another view while the bug is occurring and then maximize OF (either via Magnet or resizing) the bug lingers for a few seconds and overlaps UI elements (see 3rd image).

Normal View (under a small resolution):

Reverting to a larger window size: 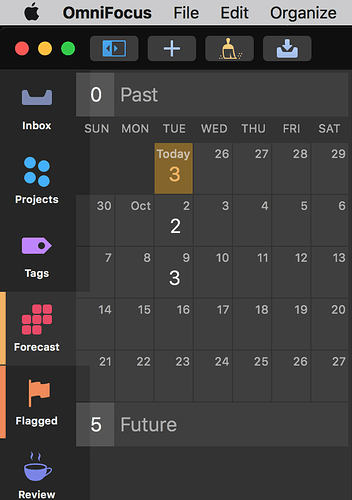