OF3 Perspective for active projects with 1+ remaining not deferred actions

I’m trying to create a perspective in OmniFocus 3 that shows me:

Does anyone know how to achieve this?

While projects can be filtered based on future defer dates, tasks can not it seems.

Actions with future defer dates will be selected if you’re using a remaining actions rule. Thus it sounds like you just want available actions, but I’m not entirely certain based on what you’ve written.

Following what you’re written, I’ve come up with this, however: 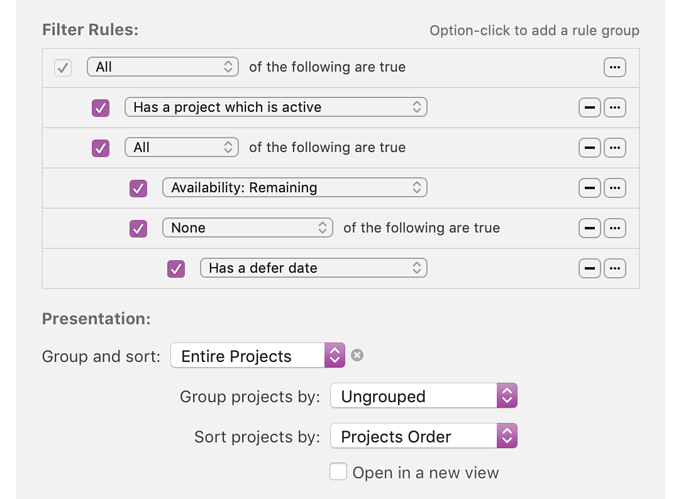 I presume as you’ve specified remaining you want on hold items to show up too, as such I would recommend this: 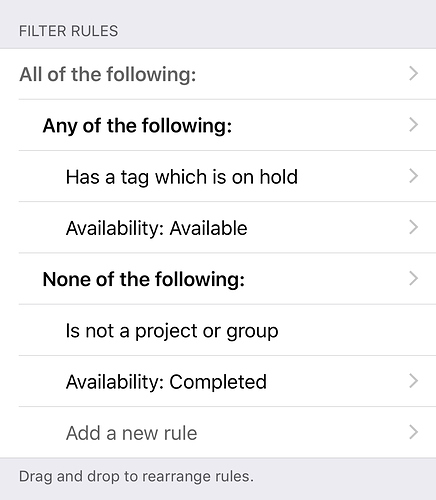 If you don’t want on hold items then you can instead do this: 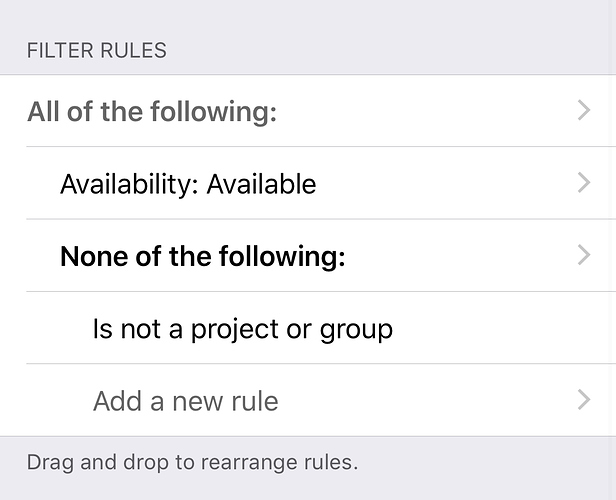 Thank you for your replies. I’ll work through them later properly but to answer your questions… I don’t want items on hold but the available selection doesn’t show me subsequent actions which I do want to see.

the available selection doesn’t show me subsequent actions which I do want to see.

I’m confused by this, if you don’t want items deferred into the future or on hold then those are the available ones? However from your original post I understood you were looking for projects.

Just for clarity for both Rose and me, are you saying you want to see all the actions in active sequential projects that are not deferred?

At any rate, that’s what the perspective rules I posted will do.

Firstly, thank you very much for your replies. I appreciate the time you’ve taken. I see that I need to explain myself much better. My apologies.

I have a perspective that I use to plan my day. Nostodnayr, you are correct, In example Project A I want to see 1, 2 and 4. Your rules achieve this. I have a similar set of rules but with less nesting.

However, this set of rules will also leave the following project in the list with no actions under it.

Project B (sequential or parallel)

I was looking for a way to write a set of rules that would show Project A as discussed while also removing Project B from the list, not just it’s deferred actions.

To add one more point, a lot of these deferred actions are repeating actions and thus have their own specific timetables.

While I think I can fudge what I am trying to do by making a lot of single action projects, putting the deferring on the project, and keeping them together using a folder, I hoped someone might be able to figure out something better.