Since upgrading to Omnifocus 3 on my iPhone, I’ve been noticing that it’s been a drain on my battery.

Is this something anyone else has experienced? Could this have something to do with the size of the database, or, could it be down to running ‘push’ synchronisation?

Yep same here and I have background turned off too

I’ve been noticing this as well. I accept that I’ve been using OmniFocus more, but yeah, if OmniFocus is ahead of Instagram, that’s a red flag. ;-)

I’m seeing this as well. There’s a similar report from a few months back as of Omnifocus on iOS (3.05) significant background battery use?

I upgraded to OF 3 at the same time as iOS 12 and watchOS 5, so I wonder if the iOS update is to blame. I’m curious, is anyone seeing this who doesn’t use a Watch?

Somehow OmniFocus is using more battery in a day than an hour long call! 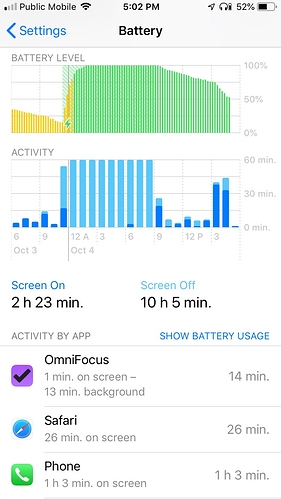 I downgraded to OmniFocus 2, and it has the same problem. I’d guess it’s more likely to be related to iOS 12 as I had no problem with OmniFocus 2 on iOS 11.

Hey there DI. My recommendation would be to test a couple of days with background activity turned off. Although you’ll lose the always-on sync capability, my guess is that you’ll have less battery load.

I experience the same issue: OF3 is draining my iPhone battery, i.e. 55% battery overnight. It makes OF3 for iPhone almost unusable. It started after I updated the iOS on my iPhone and Watch. This problem does not occur on my iPad. Also with background activity turned off, the battery is still drained by OF3. I’m afraid I have to remove OF3 from my iPhone…

I’m experiencing this too - 55% of my battery usage today has been OF 3 on my iPhone X, and I’ve hardly used it. But it’s not just my iPhone; my iPad shows 61% of battery use in the last 24 hours and I haven’t even opened OF on my iPad!! My son’s iPhone 5s is showing a similar pattern. So I think this is something that is affecting lots of people.

I have the same problem. I have turned background sync off and don’t have the app running in the background very often at all, and for the few times I access the app the battery drain is very high. Previously I always had it running in the background with Sync on and this was not a problem. I love this app but this is making it very unusable. Can someone from Omnifocus comment please on what is causing this? IOS 12, iPhone 6S, with a new battery.

I had similar problems with my old iPhone SE. I contacted the Support and we tried several things.

First, they suggested to reduce my database size by archiving old items and remove old attachments. Then they had me upload a fresh copy of my database. This didn’t help that much.

Second, they suggested that I should switch to a different sync server. I live in Switzerland and the physical distance between me and their servers might have slowed down the sync. This improved my battery life.

But still, OmniFocus’s impact on my iPhone’s battery was still higher than it was on my iPad’s one. The only thing that was different between both devices was that I had turned off location based reminders on my iPad. So, I did the same on my iPhone and that improved my battery life even further. (Still, OmniFocus’s footprint isn’t stellar—but it’s acceptable now.)