Does anyone know how to set the action status for individual actions to “On Hold” in OmniFocus 3 for Mac?

This seems like a simple question and with OmniFocus 2 I always did this.
But in OmniFocus 3 for Mac this function seems to have completely disappeared.
Even if I change the defer date to a later date, the action status will still remain active.
Although the color becomes light gray, which is an indication that an action is not available.

The only way to work around this that I have found so far is an ‘On Hold’ status tag.
You can still put tags on hold and actions get the slightly light gray color and are not displayed as available actions.

Tasks could never be set On Hold in OF1 or OF2. Only Projects or Contexts could have this status. We had a promise that we would be able to set a Dropped status setting on tasks for OF3. See the post here.

Thanks for your comment! This must be my mistake. If I had the opportunity, I would have checked this in OF2. But by installing OF3, OF2 has been removed.

I’d also find it useful, please, to be able to assign an On Hold attribute to individual actions/items (and not just to their (parent) projects).

The new ability of OF 3 to detect such a status makes filtering more elegant (and quicker) than creating and assigning ‘On Hold’ or ‘Waiting’ tags.

To be able to set individual items/actions as On Hold would also presumably prevent this anomaly:

Or am I missing another way to achieve this?

Or am I missing another way to achieve this?

You are missing nothing. Short of moving the task to its own “On Hold” project, we have no way to hide a task. I’ve got an AppleScript that “drops” a task. But that is all.

The inability to allow that a defer date on a project will take priority over the due date of an action in the project in Forecast view and the inability to set individual actions (especially Action Groups) “On Hold” are two of the remaining issues that I wish would be overcome.

Thank you so much for your helpful reply, Jeffrey!

Short of moving the task to its own “On Hold” project

… which is exactly how I had everything set up in OF 2.

I couldn’t find another way to do it then. I had hoped that 3 would provide one.

How do you/others deal with those unavailable actions’ appearance when they’re ‘unwanted’ - other, perhaps, than by creating actual due dates for them some time in 2099?

Or - perhaps - by judicious use of:

for instance - if a ‘Does not Contain’ condition were possible, the Today perspective could exclude such actions as were tagged with ‘On Hold’.

Could I be missing something here: I’ve looked, tried, experimented. But nothing so far…

the Today perspective could exclude such actions as were tagged with ‘On Hold’.

How are tasks which are on hold getting your “Today” tag? Or is this a custom perspective?

for instance - if a ‘Does not Contain’ condition were possible

This is possible, you can add a “None” group (press Alt before clicking the plus and it turns into a ...), anything inside of that group will be excluded :)

I personally prefer to use a tag for anything on hold, it allows me to find these tasks more easily later :)

Thanks so much for jumping in!

How are tasks which are on hold getting your “Today” tag?

Because I have a Project most of whose Items/Actions are Due or Deferred now/Today. One of the Items/Actions in that Project, though, is On Hold (because I tagged it as such (as in my own first post in this thread); thought that was the only way to mark it as hold in a Project all of whose other Actions/Items were Available. The same applies to Forecast.

I don’t want to see On Hold Actions/Items.

Or is this a custom perspective?

Grab of its View attached: 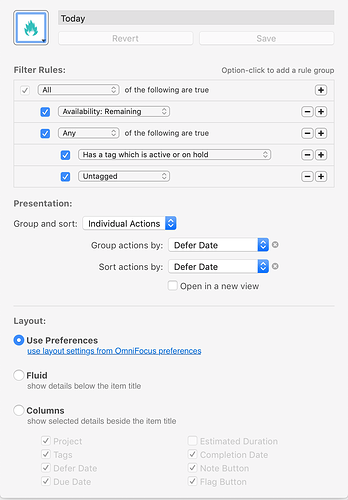 I may indeed have tweaked the one which comes with OF Pro 3.

If so, and if it’s generally not considered bad practice to Tag for On Hold (my hope was that OF 3 could exploit its own internal flagging of the On Hold Status - more elegant and reliable), then I should certainly investigate this, wouldn’t you say?

The limitation is that to put an entire Action Group on hold (as mentioned by @DrJJWMac), you need to manually select it and all its actions and apply the tag in the Inspector.

If actions had an ‘on hold’ property, that would be yet one more setting influencing the availability of actions, another rule type needed in perspectives — more trouble than it’s worth IMO.

Thanks. That’s a very helpful reply - and adds support for my contention that tagging Actions is not… evil :-)

My reservation remains that Projects do have such an attribute; and this is obviously the way to filter their actions en masse.

It seems (to me) illogical to allow parents to get away without having to do what their children have to.

My reservation remains that Projects do have such an attribute; and this is obviously the way to filter their actions en masse .

I initially replied having misread your statement :)
The project attribute is a convenient way to put aside entire projects, useful when they are sufficiently granular, you can turn them on and off. I think putting individual actions on hold is a less frequent use case.

I initially replied having misread your statement :)

I think putting individual actions on hold is a less frequent use case.

Example: I actually have an ‘OmniFocus’ Project (in a ‘Productivity’ Folder, inside ‘Software’ in Projects).

Since I have just upgraded to 3 (from 2), I have maybe half a dozen Actions which I can perform now. They are the result of a timely ‘spring clean’ on moving to the new version. They are all active, available Actions in a Project whose status is Active.

Ironically, the one thing I can’t actually get to it and finish is this one, the subject of this thread, settling once and for all how to prevent Actions which are on hold from appearing in the ‘Today’ Perspective. Necessarily that Action I have thus tagged as ‘On Hold’.

So now my filters (for use in Perspectives) are relying on two different sets of metadata in the OF database:

Really not a criticism. Have been using OF since version 1 and - every time I have looked at the competition - always happily come back to it. Love the idea, the execution and am full of admiration for the folks at Omni.

As soon as I am sure that - thanks in large part to the help on this forum - I’ve found the best answer, I can remove that tag :-)

If actions had an ‘on hold’ property, that would be yet one more setting influencing the availability of actions, another rule type needed in perspectives — more trouble than it’s worth IMO.

The inverse is that, AppleScripts are easier to code to check/reset for status than to check through a list of tags and add/drop a tag.

I would rather see the on-hold status extended from Projects to Tasks.

I would rather see the on-hold status extended from Projects to Tasks.

Mark,
Going back to your ‘Today’ perspective:

how to prevent Actions which are on hold from appearing in the ‘Today’ Perspective.

Shouldn’t you be using the ‘Availability: Available’ rule (rather than ‘Remaining’)? Then on-hold actions are not shown (whether due to a tag or the Project being on hold) — no additional rule required. Same thing with the built-in views such as Forecast.

FWIW, I have just posted an AppleScript at this link to drop/undrop a task using a drop tag. It can be easily modified to toggle an on hold tag.

I have always been a little unclear about the exact intersection of the Status/attributes of an Action/Item where ‘Available’ is concerned.

Which are inherited, for example.

The OF Glossary says:

Available status is derived from an item’s defer date, project type, and project or tag status.

Couldn’t that mean that if a Project was essentially Active (yet has On Hold items - the case here), there will be conflicts.

I’ll give it a try, though: I suspect that what you kindly suggest is the whole point of Availability :-)

Actions are available by default. If any of these conditions are met, the action becomes unavailable:

There is never a conflict as such, an ‘unavailable’ condition always wins over the default availability of an action.

Yes, I do recommend structuring your task database so that as many actions as possible are unavailable (by deferring, putting on hold, or using sequences of actions). This makes it easier and less stressful to stay on top of tasks on a daily basis. You can still see all remaining tasks when you review things (eg. look at entire projects).

the project is put on hold, or one of the action’s tags has the On Hold status

This all arises because I group all my Actions into Projects - as SALs.

For those Projects whose Status is unambiguously ‘On Hold’ there is no issue, of course because I am content that all its (child) Actions are also On Hold.

It is the Status:Active Project which has one or more Actions On Hold (currently because I’m using an ‘On Hold’ Tag; but want to find a better way so as to take advantage of OF’s built in ‘knowledge’ about Status) the is… making life difficult :-)

I don’t think you’re suggesting here that the very fact that a Tag itself has a Status: On Hold can be used, are you?

If not, then really I should remove/dispense with all the On Hold Tags; and rely on the Availability of each and every single Action by itself - regardless of the (parent) Project’s Status to filter in the Today and Forecast Perspectives, should I?

I don’t think you’re suggesting here that the very fact that a Tag itself has a Status: On Hold can be used, are you?

I am suggesting that. In OF3 that is the way you can put an individual action on hold: add to it any tag that has status ‘On Hold’.