’nil’ is, I think, a visitor from the outer space of the ObjC / Swift types, and is not the name of a value that can really be returned by a JavaScript function, whose only options in that semantic zone are null or possibly undefined.

Perhaps worth a global search and replace to protect any users who might be detained by puzzlement or fruitless searches through JS references for an elusive ‘nil’ ?

(My guess is that most of these functions actually return null rather than undefined. See the example of Canvas.graphicWithId() below)

If a graphic with a given id exists:

and if no such id is found:

We can test for equality with null, but not with 'nil’ 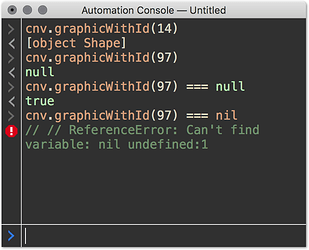