UPDATE: solved and understood now, and it seems that there will soon be a new example on the website

PlugIn actions are available to be called by other actions and external Omni Automation scripts.

This would be very useful, but is currently prevented by what looks like a bug in the selection argument passed to plugin actions.

The selection argument is typically needed by code called by both the .validate() and .perform() methods of a PlugIn.action.

When code is evaluated within a plugin, the selection argument is passed correctly both to the perform method and to the validate method.

When, however, code is called from:

The validate method is still passed a well-formed Selection object,
but the perform method is only getting an undefined value, which makes code choke on lack of access, through the selection, to canvas, view, graphics, etc …

Sample test code defining an action and its validation

When this is called by the plugin itself, the selection argument of both methods is passed a javascript object

But if we try to call the action from an external script, or from the console, we hit a bug - the perform method is passed an undefined value instead of the selection object, and our code quickly chokes …

(Note that the validate() method does seem to be passed an object when called from the terminal or an external script, so perhaps there is hope of a fix)

( It looks like the same problem may be arising on iOS with OG3 test builds, but the OG3 omniJS console.log() is losing messages when script is run from a URL, so its a little harder to check )

Thanks – I’ll take a look. Do you have an example of how you are calling the action from (for example), the console?

If I do something like PlugIn.all[0].actions[0].perform(), then the receiving plug-in action does get undefined as its first argument (since I didn’t pass any along as the argument to perform). But, maybe you have a different pattern that fails that I’m not thinking of.

OK, the issue is real, but there is an obvious workaround for the moment - a mutation hack with a more global variable, allowing .validate() to administer first aid to .perform()

In the console here:

And as a workaround, I can get .perform() to steal the argument passed to .validate():

Or perhaps just belt and braces - bind our own local name to the selection object, in case the execution context hasn’t done that. (The plugin context does take care of it, but the console and URL-execution picture seems mixed)

The sample code shown at:

‘Half-work’ in the sense that it works for .validate(), but fails for .perform()

If we look at the code example at the foot of https://omni-automation.com/actions/index.html

neither with a user-supplied argument – compounding the impression that selection is intended to be an assumed default argument that is supplied to the called function.

Ah, thanks! This will work if the validate() or perform() function doesn’t actually look at the selection object, but that is going to be relatively rare. I’ll ping Sal about updating the documentation.

The other thing that would be useful out be to add a Editor.selection accessor for cases where you don’t already know the selection (but if you have having one action call another, you could pass the selection along).

Ah, thanks! This will work if the validate() or perform() function doesn’t actually look at the selection object,

Well, it works even if those functions actually do look at the selection object (when code is executed in a plugin)

Are we perhaps missing something that the plugin context does which the console/url contexts don’t do ?

See this code for example - these actions do look at the selection object successfully, and no argument is passed by the user to validate() or to perform()

Here as a draft plugin, for testing use only. NB this version is compatible with Sierra onwards only – if there is interest I will convert it to an ES5 JS form which can run on some earlier macOS builds. This draft is written in ES6 JavaScript. [image] https://drive.google.com/open?id=0B8zHpuZ2eLMzX29nVndiQ204UVk Aims to supplement the built-in GraphViz 'dot' layout with a tidier (Reingold Tilford) layout of trees. (Parent nodes centered over their children). If there is more than one …

So I can get to this simplified calling of Plugin actions from outside: 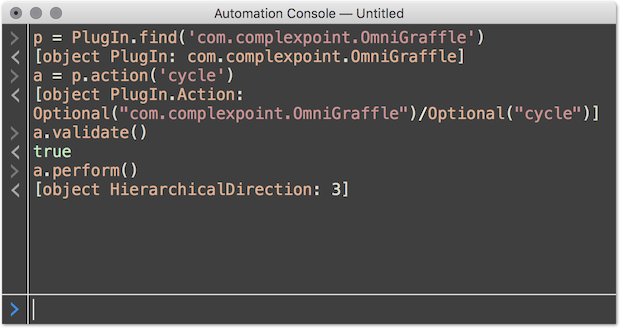 by slightly rewriting the action-defining closure:

Here are templates for creating OmniGraffle and OmniOutliner actions that can be called “internally” and “externally”. Note that since OmniOutliner currently doesn’t offer the ability to create a selection object via scripting, I’m using selectedNodes of the Editor class to generate an array of selected items.

And a function for calling an action externally. If has a lot of error checking and can be slimmed down, but you get the idea:

I’ve updated the website to include action templates for both OmniGraffle and OmniOutliner that are callable from external scripts. Thanks to draft8 for the excellent sleuthing!