Home-grown omniJS plugins are easily installed on macOS, but I find that I have struggled a bit on iOS, and still feel a bit unclear about some things.

Omni-Automation.com’s video of pre-cooked plugin installation shows what happens when a supplied web-link is clicked, and that works fine, but for testing our own plugins …

BUT there are a couple of curious opacities if the OmniSyncServer route is used to install or delete a plugin.

It could well be that I am missing something here, but are there some residual opacities, and a slight lack of control in the iOS installation of plugins at this early stage ?

Should the email route work ?
(perhaps that is deprecated for security reasons ?)

Would a dropbox route be conceivable ? (I tried that but seem to have failed the IQ test :-)

(I tried setting up a Google Drive link and got as far is the Import to OmniGraffle dialog in Safari, but that just led to a second of black screen with no result or import)

Update - the install failure from Google Drive turned out to involve competition with another app – once that was uninstalled, I was able to create a local installation of my plugin through Safari and a Google Drive link.

One problem seems to be that the .Zip archive format may be registered to other iOS apps.

If I prepare a Google Drive link to a zipped omniJS plugin, and open that link in Safari, what really happens can easily be slightly more accident-prone than the omni-automation.com video might suggest: 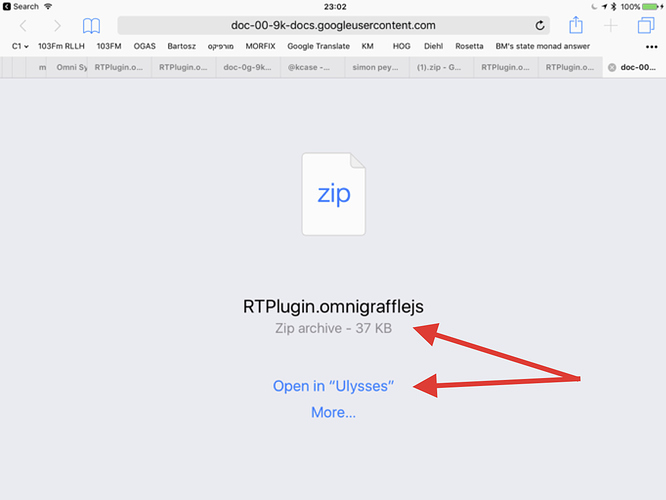 The only reliable path (perhaps the video could helpfully show this ?) is actually to ignore any “Open in” links, and go instead to More … leading to an iOS action list in which, with any luck, you should be able to find “Import to Omnigraffle”