OmniOutliner as FlowChart for Backward Planning

I would like to be able to use OmniOutliner as a backward planning chart. I can create different levels that lead me to the first action I need to take, but the problem is that it ends up being buried to, for example, level 6. I wish that there was a function that allows me to toggle between reverse indentation of the different levels so that I can see level 6 as the most ‘out-dented’ action (where Level 1 would typically be placed). For example, level 6 row is typically indented the most, but in the way I would like to see it is that level 6 row will be on the same row but the least indented of all while level 1 will stay on the line where it is but be the most indented.

Can I create a template where this reverse indentation happens automatically?

The idea is to be able to see the first step of a project first.
I use OmniFocus, but for some projects it is not functional because the tasks depend on a very specific context (e.g. page 3 of a project or a specific question I am figuring out for a project).

I’m not sure of the process here but since each level is a child of a higher level, I’m not sure you could reverse the indent. You can turn off the indent under “Inspector” for the levels.
Can you post an example?
It sounds more like you need to add a parent above then move the lower children under it. If you are doing steps, would the major steps be Level 1 or 2 items and sub-steps lower level?

You could write an AppleScript to reverse your outline, but it would be tricky.

It might be easier if you built a Keyboard Maestro macro that would invert the hierarchy as you go.

IOW, have the KM macro demote the current headline to the child of a new blank headline and type in the new previous step.

Here are two examples of the backwards in MindNode and in OO.

The last nodes in the flowchart are the first steps that I can take tomorrow to get to my goal.

I find it easier to see the first steps I can take in the flow chart, but I do not want to use many apps to get my work done. So I would rather be able to do this in OO. However, in OO the first steps are deeply buried.

At this point, scripts are way over my head, though I use them if they are integrated in the app. 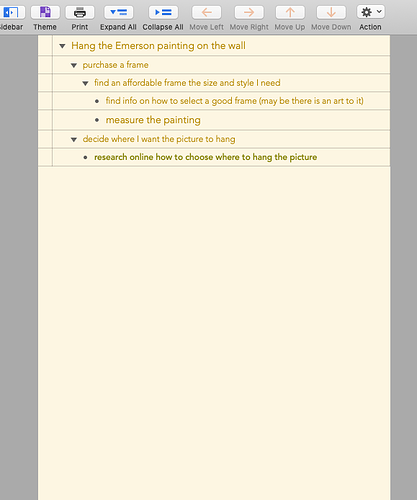 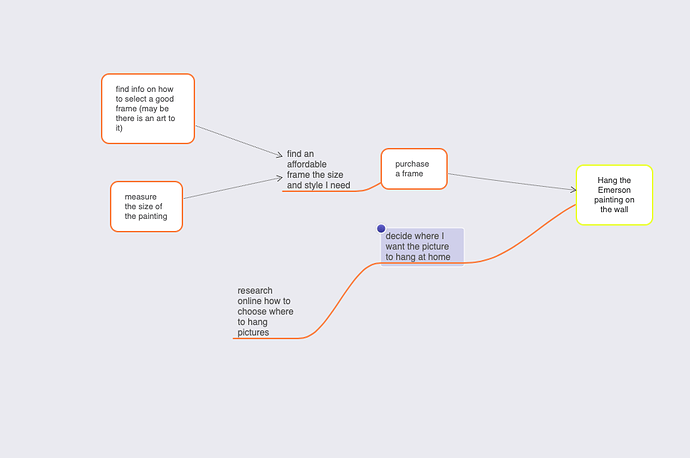 I was thinking that may be there could be a script for placing each child in its own row, but automatically into the subsequent column. That way I could see the furthest column as the first action to be completed.

I can’t write such a script though.

Just letting you know that I discovered another mind mapping app that works really well and gives me a timeline too, so it is sort of like Gantt chart only more flexible.

With the LTR ⇄ RTL direction button, you can flip all or part of the outline back and forth between:

Phew! I thought IOW was a technical term.

That is great to know. Thank you! 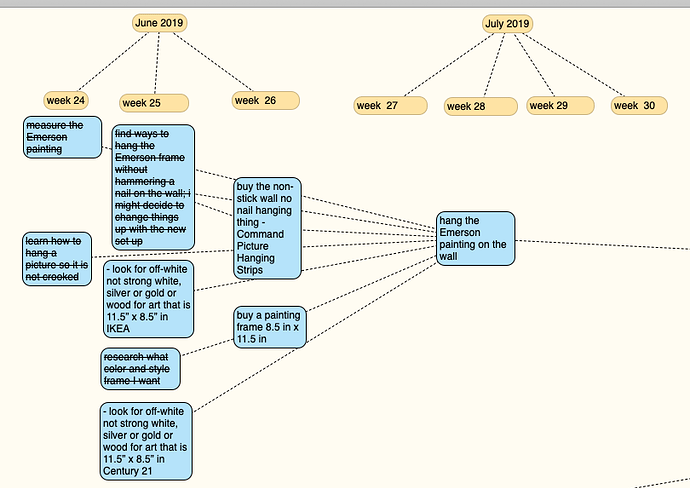 FWIW a couple of macros for (getting an outline out of) Scapple here:

Save or Copy Scapple diagram as OPML/tabbed outline (treating arrows as parent...

Literature and Latte's excellent Scapple doesn't inherently use a nested architecture: All nodes are peers, by default, The built-in Save As OPML yields a flat, un-nested (unindented) list of peer nodes. If, however, we choose to interpret Scapple...