Do we understand the relationship between setting the .effort .effortDone and .effortRemaining properties of tasks through the omniJS API in OP4 macOS ?

There appears to be a bug:

If .effortDone is set (to any value), completed in the GUI shows 0%, and effortRemaining is shown as the same as total effort.

Things seem to go better if we set .effortRemaining to the complementary value, and the API does report a duly updated value, in the expected units (seconds)

But back in the GUI, completed still shows 0%.

Am I missing something ?

Yes - I was probably missing something.

All seems to be working well here in tests (macOS OP4, through omniplan.evaluateJavascript) with isolated tasks:

In the absence of documentation, and as I personally found this confusing in the first round, here is a summary of what the getting and setting relationships appear to be between the following properties of Task in the macOS OP 4.02 omniJS API: 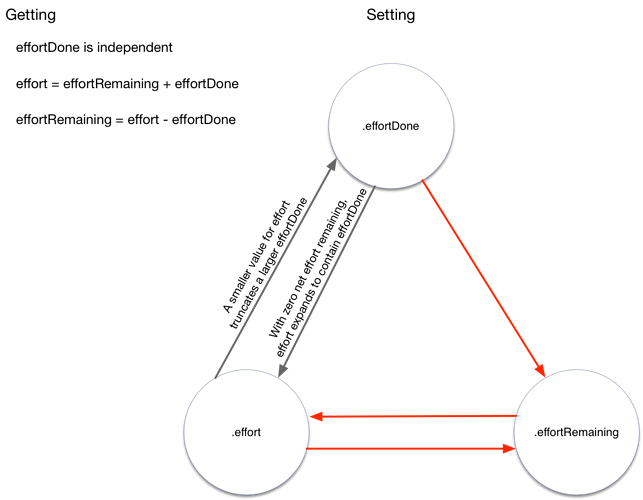 At least, this is my current impression …

In the absence of documentation, caution is a virtue :-)

Your summary of the relationship and expected behaviors with these three effort properties is all spot on. I’ll file a request with the team to better document the interaction between these properties in our scripting API and user manual.