I tapped on a task in the Today screen on my iPhone. When the task opened in OF, there was no navigation bar at the top of the screen. I could edit the task but there was no way back out of it.

So I forced OF closed via the app switcher and then re-opened OF. When it re-opened, the same task displayed but the navigation bar was now displayed.

I’ve attached a screenshot of the task without navigation bar. 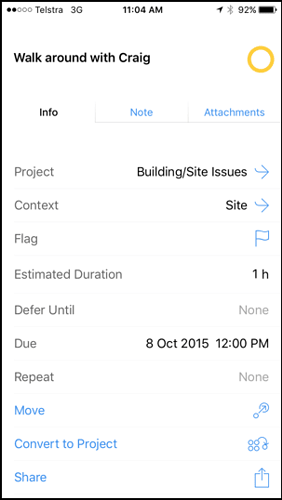 Thanks for letting us know! In the future, the best way to report bugs is by emailing OmniFocus support or by sending feedback from within the app. We can’t always monitor every post on the forums, but we make sure to read emails that come in.

We do appreciate the time it takes to report these kinds of issues - customer feedback is one of the best ways we hear about problems affecting people in daily OmniFocus use. Thank you!

Thanks, I wasn’t aware that you preferred email for bug reports.