I don’t recall this being an issue before, but maybe I’m only now noticing it.

OmniFocus is open in the background on my phone. I.e., I have not force quit it.

A task comes due. The badge app icon should change accordingly, but doesn’t. When I cycle through my open apps, the task count in Forecast view does not go to red (for overdue). Only when I bring the app to the front does it seem to realize I have an overdue item–turning the Forecast task count red and showing the badge app number.

Screenshots attached–all taken within seconds of each other, though the task in question was an hour overdue.

What am I missing? Why isn’t OF catching the overdue task? Would love to see the overdue badge app icon. All my settings are right for it–just this odd delay unless/until I actually bring the app to the front. 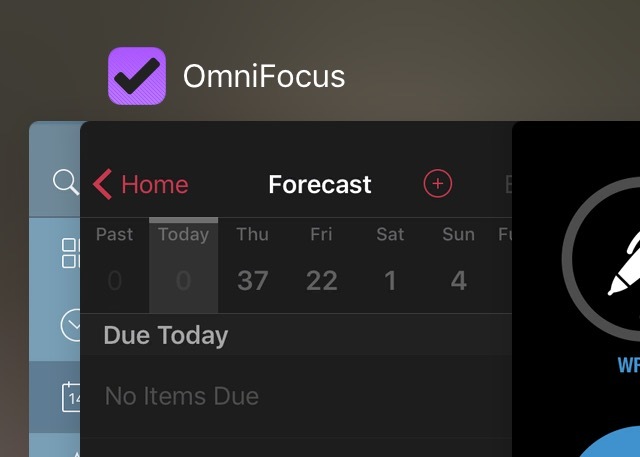 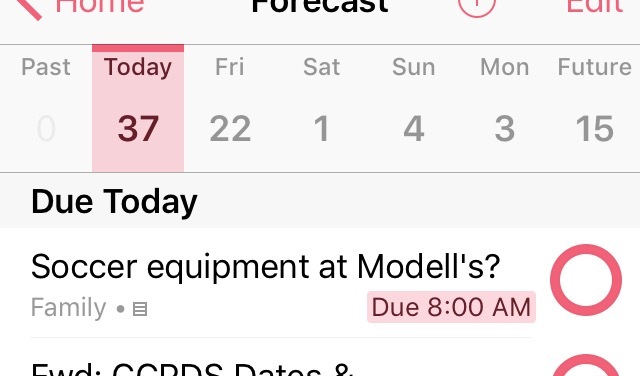 Hm, that’s curious! I’d expect the app to get badged, unless the system is quitting it on your behalf (due to memory pressure from other apps, for example).

The app switcher is a different story – iOS screenshots OmniFocus as it goes into the background, and may not take another screenshot when tasks fall due. OmniFocus has relatively little control about how its app switching UI is shown until it’s selected as the active app again.

Have you gotten in touch with our support team about this issue? They’re likely to have specific troubleshooting tips for you!

Thanks, tekl. No, there shouldn’t be significant memory pressure from other apps.

No worries about the app switcher–but a badge fix would be nice.

If I uninstall and re-install OF on my phone, will all my custom perspectives still show? Will I have to re-arrange order of appearance, etc.? That may be the easiest option.

Uninstalling an iOS app resets all its user preferences, so yes – you’ll need to rearrange custom perspectives again, as well as configure anything in Settings that you’ve changed from the default (like configuring Reminders Capture, for instance).

Okay–thanks. Will wait to hear from support, then. Missing having a fully functional badge app icon, and still not sure what has gone wrong. Surprised others haven’t reported it?