Perspective that filters by contexts?

I’m trying to create a new perspective that groups actions independently from a selected set of contexts. Even though it shows my desired contexts in the Sidebar Selections section, it doesn’t seem to be filtering on those contexts.

Am I missing something or is this a bug?

cmd and mark the needed contexts - on the right side appears the possibility to give a Title to the view.

I’m also trying to do this. I have a few contexts that I want to have shown in a perspective and just those contexts. I’ve tried renaming the Title but this doesn’t seem to do anything.

cmd and mark the needed contexts - on the right side appears the possibility to give a Title to the view.

I probably don’t understand what this feature is meant to be used for, but it seems to me that it gives 2 contexts the same name, not create a view that combines both contexts.

excuse me; what you say is right.
It does anything and you overwrite the contexts.

This is now working for me. I think one of the recent builds cleaned this up. Also syncs across devices which is great.

How is it working for you? If I follow those steps I still end up with renamed contexts.

What I really want is the ability to list the contexts under the perspectives filters like statuses. That way it could be used in any perspective (including project hierarchy).

Hello, I’ve the same problém, i can’t choose item from field “sidebar selection” in perspective Option to include context. Is anyone knows if it’s a bug on a beta or if i don’tfollow the correct process.

I’m also trying to do the same thing - I want to create 3 differents perspectives where each includes a subset of my total set of context. I also want the perspective view to be by project, not context. Thus, if I have a “Home” perspective, I would filter on just “Anywhere” and “Home” contexts but would see my list of projects on the left.

I cannot figure out how to do this at all. cmd-clicking contexts with my perspectives window open I can’t seem to see how to add these explicit contexts to be a part of my perspective. hmmm

I’m also interested in this. How to have a perspective that filters by contexts?

I hope it works for you.

Just came across this because I have the same issue. Not able to create a perspective that filters by context but also preserves the Project hierarchy.

@Kayfum: What you suggest doesn’t seem to work if one wishes the perspective to be in “Project Mode” (aka, “Use Project Hierarchy” option is selected in the perspective’s options).

FYI, when I contacted Omni customer service, they were as awesome as usual: they confirmed that this is an absent feature. Support Human Aaron C. offered this useful work-around:

“In any custom perspective, whether using project hierarchy or not, there is a Find Text filtering option. The Find Text option works like the Search field, and supports Twitter-style tagging (#example). You could give your context a unique name, like #Errands, or put a tag in the title or notes field of an action or project, and then use this feature to capture those items into a custom perspective.”

I was trying to add a perspective that just shows items in one context, but as far as i can tell that is not supported in Omnifocus. So i tried to setup a perspective using the workaround recommended here, inserting #punchlist as a tag into those items in my omnifocus database. But the perspective does not work reliably - sometimes i get a blank screen.

I can get this method to work by just using “search everything” on the text “#punchlist” but i would prefer to use a perspective since that is a single click from the toolbar or sidebar.

Attached is a screenshot of my custom perspective setup, have i done something obviously wrong? tia. 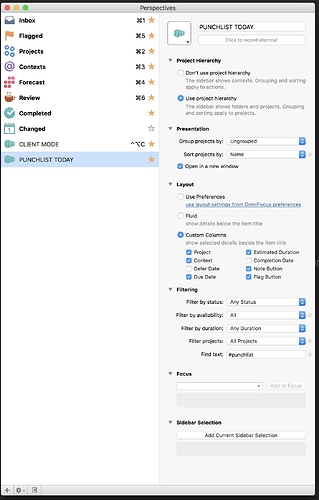 To add a perspective that shows only one context, make sure the perspective is not using project hierarchy, and then highlight only the perspective you want to view. Then pull down the eyeball menu and click SAVE.

I would also suggest you add a placeholder item somewhere that contains #punchlist, so that the perspective will always find at least one item, and you will know it’s working.