OF3 is so good ,but not fully support Mojave System wide dark mode，
The setting page should be dark in Mojave dark mode 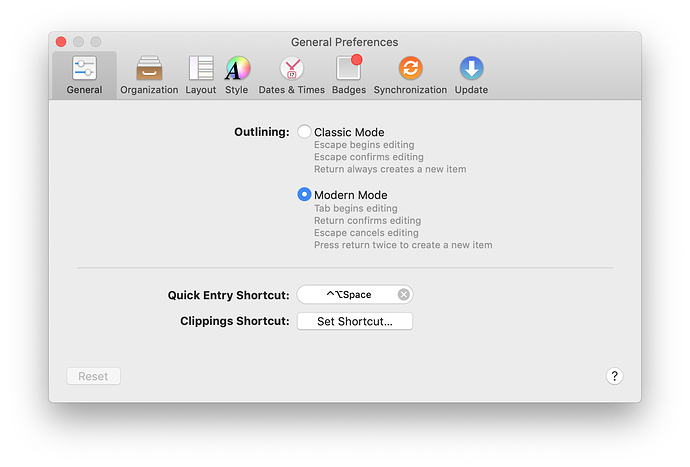 Yeah I am sad to see that my custom perspective can’t be used and that we are back to the same place we were when we went from OmniFocus 1 to OmniFocus 2. It took a couple years to get custom colors back, I finally got it all laid out and made the switch (though OmniFocus 2 still had many missing features from 1).

For now you can go to Style and change to dark mode for what it’s worth but I am sure you knew that.

OmniFocus 3 feels slightly incomplete in some areas, not sure if there was a reason (I don’t think Mojave changed that much in terms of backend code/API’s, but I could be wrong) or if they just didn’t have enough time to fully develop OF3 (which I find very strange considering the years between OF 2’s release and now).

Somethings that are not “ready” seem silly (e.g. light mode sidebar) and I am not sure how or why they escaped the design and/or quality control phases.

We designed a default theme that had a dark sidebar. Our test period started, and while most folks raved about the new look, some had a very negative reaction. We had failed to anticipate that. We weighed our options and chose to ship a light side sidebar in a point release rather than take on additional risk for the initial release.

Working around OS releases is always difficult. Some years we do better, some worse. Sometimes the fall hardware releases throw us curveballs. The adoption curve comes into play. The good news is that we don’t stop working on our apps when when the .0 release ships, and the 3.1 release with automatic theme switching in Mojave and a light sidebar option will be in public test next week.

Thanks for the response @dave! It’s good to hear that the mistakes are on track to being corrected in a faster than expected fashion. I look forward to 3.1 being released very soon, just like many other eager customers.

My biggest advice/feedback to OmniGroup for future releases: always ensure your customers have choices and flexibility in having the program conform to them, not the other way around.

P.S. Hopefully we’ll have a theme editor or someway to edit the colors of text because this is another silly thing: 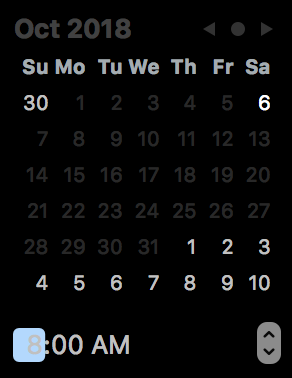 My biggest advice/feedback to OmniGroup for future releases: always ensure your customers have choices and flexibility in having the program conform to them, not the other way around.

One might have hoped they’d have learned this from the mad scramble to roll back the loss of information density in OF2, but…

@dave, that is good news about the sidebar. Will the light sidebar include a light buttonbar looking like in OF 2? To me, the dark buttonbar is the most distracting part, as all the perspective buttons now are brightly colored all the time, as if screaming for attention. It’s hard to understand why you left the old behavior, with only the selected button colored, indicating what perspective is in use, and the others dimmed. It’s even less appearent what perspective is in use as there is so little difference between the dark grey background and the black background for the buttons that are not selected.

That all sounds very sensible, but you’ve got to take into account the pressure created by Apple’s annual Mac OS/IOS update schedule. Every year, Omni and others have to spend a chunk of time and effort between June and September testing the impact of the new round of changes on their apps. If, at the same time, they’re pushing a major app update of their own out the door, there are bound to be trade-ffs of priority and time.
It would be lovely if the .0 release was complete and perfect in every way, but I think we should understand that it often won’t be. And we should give credit to Omni for publicly recognising that the .0 release is just the first in a long series of steps.
We don’t have to be happy with Omni’s priority choices but I do think we should recognise that they were made with serious consideration, rather than assuming they arose from carelessness or foolishness.

you’ve got to take into account the pressure created by Apple’s annual Mac OS/IOS update schedule.

I don’t think I have to, you know. I signed up to beta-test OF2 in April 2013 and it was released in June 2014. Omni set their own release dates, so it’s up to them whether or not they’re working on a major release during the beta-testing of this year’s macOS, and it’s also up to them how much testing they perform before a major release.

I’ve been using OmniFocus since it was KinklessGTD and I buy the latest OmniOutliner and OmniGraffle for macOS and iOS as soon as they’re released (I even had OmniPlan licenses when it was relevant to my work). I choose to use Omni apps because they’re the best but, in the case of OmniFocus, it’s now more like the least worst of the GTD-friendly apps out there. Omni’s design choices for OF2 and OF3 for macOS seem directed more by fashion than by usability, especially when compared to their other apps I use regularly.

I’m a paying customer. I can choose not to pay and, for now, that’s what I’m doing. I’ll see what 3.1’s “light sidebar” has to offer, but I’m bracing for disappointment.

I agree with you, Things 3’s design is much better than OF3, but I like OF, I’m waiting for the update.

I guess you’re on High Sierra? This is actually an Apple bug, not an Omni one.

P.S. Hopefully we’ll have a theme editor or someway to edit the colors of text because this is another silly thing:

As Rose notes, this is a bug in the system control that has been present for as long as there has been a dark system appearance. It was finally fixed for Mojave.