For whatever reason I can’t see Projects or Folders in the main tasks list. This makes it impossible to change project settings. Is this some option I changed at some point? I can’t seem to figure it out! Seems to be fine on my Mac and iPhone though, which makes me think it could be a bug? 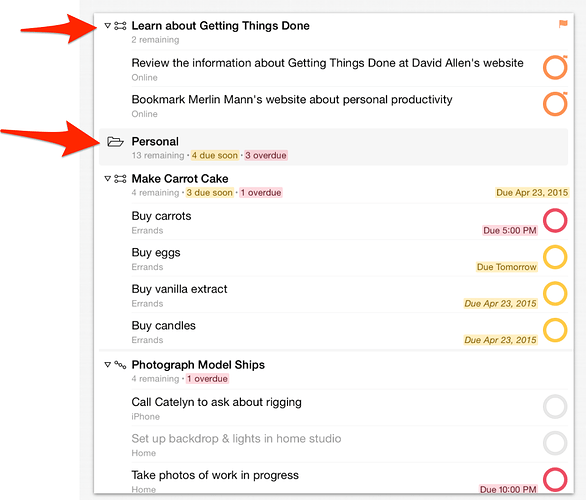 I attached a photo that shows what I am missing.

If you go to the View menu (looks like an eye), you’ll see an option there called “Show folders in the outline”. 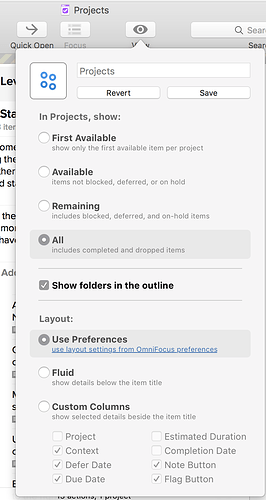 I hope that helps! Good luck.

Thanks! I thought I had tried that last night and it didn’t work. I’ll try it again later tonight when I have access to my Mac.

That doesn’t seem to fix the problem. Still don’t see any project names or folder names in the task list. :(

On iOS you do not have the option to view folders in your task list. As a workaround, you can use landscaped orientation on some devices so that you see the folders on the left and your tasks on the right, but it depends on the size of your screen what is displayed.

I thought from the photo that you were on the Mac. Sorry for the misleading suggestion if that isn’t the case.

That’s fine, but do you have any idea why my projects wouldn’t show up there? They show up on the iPhone, but not the iPad. I have no way of editing projects on the iPad because of it. :(

Your projects and folders should be the first screen that you see when you first tap projects from the Home screen. It is possible that you are drilled down inside of a project currently, but in that case you should have a link in the upper left hand corner that you can tap on to bring you back up a level in your project hierarchy.

Sorry for the trouble. If your projects aren’t appearing at the main screen, please contact our support humans and we will try to figure out what has happened and get you back to an expected state. Email: omnifocus@omnigroup.com or +1 206-523-4152 or 800-315-OMNI (10a-5p PDT M-F)

Hey there @sledsworth! Shot in the dark: are you running the iOS 10 betas, by chance? We’re aware of an issue on iOS 10 where section headers (projects and folders, usually) don’t appear in outlines.

Oh, I feel silly! I forgot that I had updated that iPad to iOS 10. -__- Thanks for the info though, I thought I was losing my mind trying to find a way to edit the name of my project haha

Just a note for you (and anyone else testing out iOS 10): we’ve got some compatibility fixes coming soon in TestFlight. If you’re interested, feel free to sign up on our website.