IMHO the REAL solution - which is yet to be implemented in OF of course, is the ability to nest projects within projects - with the flexibility of being able to make them parallel or sequential - AND having control over how they relate to each other…

Real world project management means many moving parts and infinite degrees of complexity and interdependencies and honestly, OF falls apart a bit in this regard in that one can ONLY have 1 type of Project, which can’t possibly cover all scenarios and applications…

Am I the only one who feels being able to take a complex project like “Convert 1969 Jaguar XKE to Electric” (just for example) and break it apart into “chunks” - some Parallel but many Sequential - and then define how finishing one “sub project” would allow the next “sub project” to become available to be the “finishing touch” OF really needs now that Tags are done?

Completely agree. You should definitely request this. I will to.

Hey @kidtreo! Thanks for this example. It really helps when folks talk about how they use OmniFocus, so we can better understand how to serve everyone’s diverse use cases.

In this case, though, I’m curious: do action groups work for you? These are smaller lists of actions within a project, that can each be set to parallel or sequential on their own, leading to exactly the kind of “chunks” that you describe. A top-level sequential project even knows to make each action group available only when the previous group has been completed. You can read more about creating action groups on iOS here.

If that’s not quite a solution for your use case, please feel free to follow up or email it in! We learn from each email about how people use OmniFocus. Thanks!

Action GROUPS you say? I had no idea…thank you for pointing me at that I will certainly explore and get back to you. I also have some pretty forward thinking ideas on how (even simple) machine intelligence used with questionairre’s could be very helpful in new users initial set up, or even advanced users getting unstuck or just more focused / back on track. OF is indeed leading the way but could go sooooo much further I hope you agree :)

EDIT: OK first question lol - how to on OSX?

Action groups almost work for this, except that they aren’t collapsible on mobile devices so they make projects ridiculously messy to view on iPad or iPhone.

Also, it’s clunky to add new tasks to action groups at edit time. Not that having dozens of projects (like I generally do) doesn’t make it clunky to add to projects, but at least that’s just a matter of extra typing. Needing to use an entirely different interaction (adding to an action group does require you to assign the task to a project and then drag that task into the action group, correct?) slows everything down.

Projects within projects would be nice but I’d be happy with being able to tag folders. Right now my structure is:

I can set tags, obviously, at the project level which are inherited by the actions.

Of course if you could nest projects within projects I could replace all those folder levels with projects and tag inheritance would work automatically. BTW, I also take notes by creating actions tagged with “Note”. I prevent notes from appearing in my task perspectives and have a “Notes” perspective for collecting them together (tags are great!)

Just want to say to finish on a positive note, I’m loving the new tag functionality in OF3. (Nearly) all the inconvenience that turned me away from OF in the past has been removed. :) Now if only I could tag folders so I didn’t have to tag each project individually that would be perfect.

/edit - the “Project” tag in this case doesn’t mean “This is an OF project”, it means that it relates to a services project being executed by the team (as opposed to a sales opportunity, staff/personal/product development etc.)

Agree entirely…OF3 is a HUGE improvement I’ve been waiting on for years but hope that this area of development is addressed soooooon as it’s kind of a glaring omission IMHO.

Action groups almost work for this, except that they aren’t collapsible on mobile devices so they make projects ridiculously messy to view on iPad or iPhone.

Agreed. Not only is it messy to work with AG’s on ios, is extremely difficult to add tasks, you have to add the task at the project level, hit done and then try the drag/drop or go back into the task to use the move dialog. I wish we could go “into” an action group, like of2?

Also, from custom perspectives, following a link to a tasks’s project, you’re dropped into a possibly huge project with multiple action groups. I’ve tried to break down some of my projects but the number would just increase the confusion on the sidebar. Collapsible action groups would be nice but I would prefer more of a focus behavior; tapping the parent task of an ag that leads to a page of only that ag.

I’d be happy with being able to tag folders

yes, and I keep catching myself trying to defer them…

I’m curious: do action groups work for you

I have only recently really figured out what Action Groups actually are. I struggled, because I assumed they’re a hierarchy of thing and actions below it, but that’s not really the case. If an action belongs to an Action Group, you don’t see that in its “path”, seeing only the overarching project.

Rather, Action Groups are actually actions that are blocked by predecessors. If I want to Email Suzy about the report, but can only do that once I have Pick up report from Gary, I might make the Suzy action a group, and the Gary action its child, creating a sequential relationship, but without affecting the parallel relationship of other actions in the same project (for example).

This, I think, is entirely different form the notion of sub-projects, where, I’d assume, the project and subproject would both be seen if an action is shown on its own in another perspective (like Forecast). I recently encountered this need while planning my wife’s birthday. Her birthday has severable projects about it, from doing the cake to planning the family party to planning a special day out to gift shopping. In this case:

As such, I’ve resorted to creating a folder called Wife's Birthday with multiple projects in it (and I’ll drop the folder once the projects are done).

I think (think?) the problem people are looking to solve is “how do I look at a bunch of outcomes together, because their meaning together matters”. Sub-projects might be a potential solution. Another potential solution might be project-level tagging (and some supporting perspective rules, like has a project tagged with:) to “group” projects outside or independently of their folder hierarchy. This would allow for ephemeral tags to enable projects to be looked at as a collective.

Folders are an option, too, of course. It might be interesting for folders to have a “Completed” status, though, as well as due/defer dates, and tags, allowing them to be a way of collecting related projects.

Thanks Scotty. As a novice in action groups usage , I have many times the need to make ‘subprojects whithin projects’ and use action groups: they look nice when I create them (see image) but then the behaviour in different perspectives is quite different to ‘normal’ project actions, both in how they’re viewed and hierarchy.

I did something so simple as to make a project for the GTD weekly Review, which has 3 concepts and several actions whitin each of these: 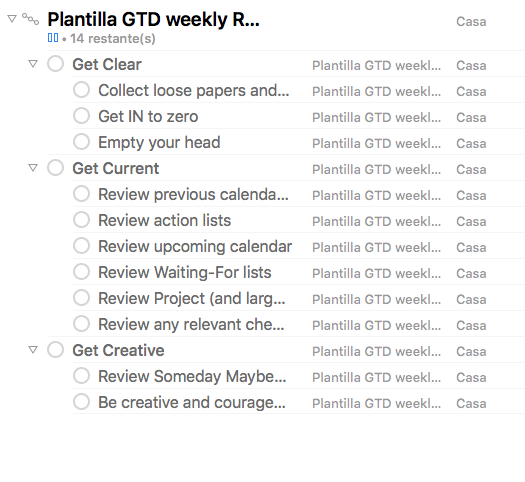 I like to keep the three concepts instead of the full list of actions, since it helps my thinking, so I created action groups for each task whithin each concept. I think having a folder and 3 projects for these is less clear and overkill, since they belong to one same thing I have to complete.

Well… I would like that everything in the action groups would be sequential, and to complete them one by one, but in perspectives all actions whithin each action group appear together…

¿Maybe I am doing something wrong?

Make sure the parent task for each action group is set to sequential too.

This is the way I like to organise things too sometimes, however, there is no consistency in UI across the iOS and Mac App.

In Mac you can collapse the actions groups to tidy up space and focus, in iOS you cannot.

So if you use action groups in iOS you should bear this UI issue in mind, as it means you’re entire view will be taken up with just one action group list rather than being able to see a full overview with all the headers in.

I can’t believe no-one properly quality tested that in the beta stages.

Thanks rosemary. Both the project and the parent tasks are set to sequential. But actions whihin each action group cannot be set as sequential or parallel. They lack this attribute, so all of them are displayed and they behave as parallel, available options.

Have you set the perspective to only show “Available” actions, not “Remaining”?

Thank you , yes I have

Action groups just don’t cut it and are too inflexible.

@heyscottyj’s solution can work, but what about those one off tasks that are relevant to “Wife’s Birthday” but not a project.

You can create a single action list within the folder, but then the Review function gets all out of whack because all I want is to review “Wife’s Birthday” but now I have four projects in a folder called “Wife’s Birthday” all with different review dates.

I’ve never really been able to get over this hurdle with OF3. My use case is that I take on a new case, lets say “001 OF termination grievance”. Within that case I might have several projects. It’d be much easier if both the top level and the bottom levels were projects, with inherited Review dates (and due and defer dates), with the option to override the review date (and the due date and defer date) on the subproject.

As it stands now, I have to create a folder called 001…, then a single action project called 001, then have the projects. Not ideal, and too much of a hassle on creation and completion.