Hey guys I had a quick question about Automating Omni.

Is there any way to quickly add attachments or pictures to an Omnifocus task?

Now I would like to be able to do this for both iOS and Mac, but I’ll show you what I mean on iOS first… 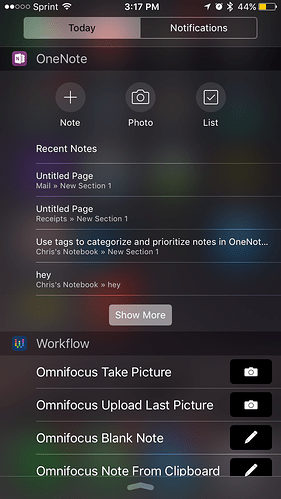 In Onenote I have the option to just snap a picture on the fly and upload it 1, 2, 3.

Having to manually own the camera app, take a picture, open my pictures, hit the Share button, Open a task, title the task and save it is really really tedious for my needs.

I’ve come up with a few solutions.

The first is an app called Workflow that automates tasks

If you look in the image I included earlier in the post, you’ll see it under the OneNote Options.

When I click “Omnifocus Take picture” it automatically opens the camera app, and when I snap it it emails it to my Omnifocus email.

But still, this workflow is a little problematic. The first is, I don’t necessarily want my email “Sent” box cluttered up with all my Omnifocus Email. The second is, the emails sometimes take a bit to sync. For example, sometimes I’ll send the pic then 10 minutes later I’ll get the task in my Omni.

Now I have the same issue on the Mac version. For example the Quick Entry is amazing. I hit my keyboard shortcut and it pops up. But it would be nice if I could find a pic on my Mac or on the Web and have the same quickness. Plus I find that adding pic attachments from the web is problematic. It adds the URL rather than the pic itself.

Anyway, here are the workflows I build.

You just have to replace "YourOmnifocusEmailHere"with your Omnifocus Forward-To Address and the “Ask When Run” box with your email.

Anyway, anyone has any other solutions? Applescripts? Automator Services?

Brilliant! Thanks for sharing, @chrisvacc.

We need to fix some things about the way we store attachments before we can add any more features that encourage customers to add them, but the first steps of that work are happening right now. In the meantime this is a great workflow; thanks for sharing!

Great to hear, @dave. I could see a lot of uses for the share sheet and task creation.

Thanks for your feedback guys.

But yea, I think that would be a great feature. Part of my GTD system is that I like to get ideas down as quick as possible so it doesn’t interrupt whatever i’m working on, so being able to snap a quick pic and add it to a task would be invaluable.

And I’m glad you guys found the workflows useful, I’m gonna post them in the iPhone section as well.

Tickle on this. What is the current best practice with Image workflow? Also, for PDFs?