I have several hundred OmniGraffle documents with state machine drawings in them (I teach Computer Engineering topics, it isn’t just a strange hobby).

Under previous versions of OmniGraffle, I could draw a curved line leaving a circle and then returning to the same circle. The curved line would start and end at the border of the circle. Like the first row of the attached image below.

Opening the same file in OmniGraffle 7 shows the arrows of the self loop now route to the center of the circle, not the border. Illustrated in the second row of the image.

I can change the “Route from object center” property in the connections inspector and the loop now looks better, except that the corners are more pronounced. And, all those other nice arcs are now much more “cornered” as well. Third row shows it. 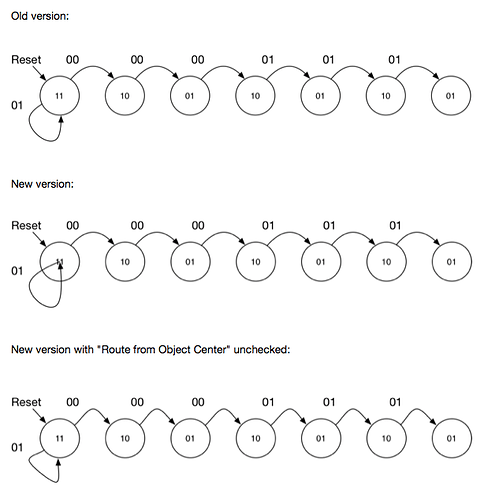 SelfLoopProblem619×634 65.3 KB
Can I get back my old self-loops? Or am I stuck with the rough corners? I suppose I can go and set “Route from object center” only on the self-loops, but…

This doesn’t seem correct to me at first glance, because I believe the example on the top should stop at the edges of the shape, unless you’ve placed a magnet inside the circle. I’ve reported this to the team in an attempt to discover what the expected result is. This may just be a bug and not an intentional change.

In the meantime, using a magnet to attach the loop where you want seems like the best approach. The other workaround is to add a midpoint to the line so you can control both sides of the curve.