Scaling parts of a group / object

I often wish I could have an object/group in OmniGraffle where when I expand the object, not all of the pieces scale with it:

Is it possible to have a stencil where part of the stencil will scale and part will not? For instance – if you’re making AWS architecture diagrams (e.g. https://aws.amazon.com/architecture/icons/), you will often have some kind of area – say a rounded box with a dashed line – with some kind of marker on the edge indicating what the box is (a subnet, VPC, availability zone). It’d be nice to have a stencil containing both the box and the marker and be able to scale the stencil such that the box g…

I’ve come away with the belief that this isn’t possible in OmniGraffle, except I was just resizing a sequence diagram element and it’s showing the behaviour I desire: 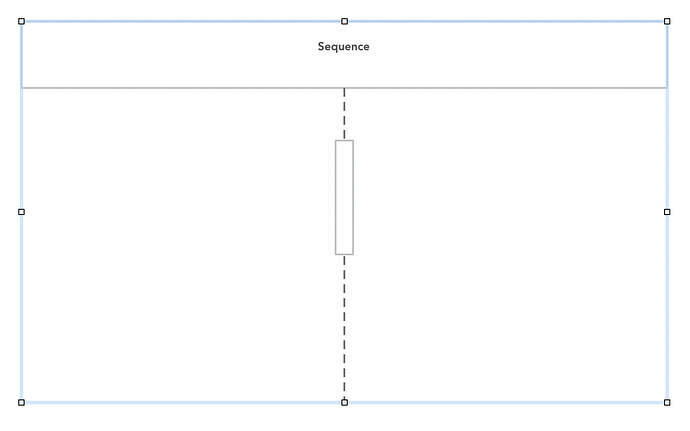 When I expand the width of the “Class Role” object, the class box at the top expands, but the box on the line does not. Why, and can I reproduce that in my own objects? Is there a name for that capability in OmniGraffle that I can look up in the help?

I tried a few different ways to duplicate your success but no luck. You can select part of a group and resize it without affecting rest of group. Have to select a couple times or use the Sidebar to select the appropriate element. Than you can re-align them.

When you were able to resize the part of the group, did rest of group stay in their correct position (ie did the dashed line and lower rectangle move but stay centered (and move right if expanding to the right)?

I mean – I wouldn’t say that everything moves exactly as I’d like – the horizontal movement is actually pretty spot on, but vertical resizing affects things that I wouldn’t want to change. I’m just trying to understand how the horizontal resizing works, even if it’s not a complete solution, it seems to do at least some of what I want.

That is intersting. I haven’t yet figured out how to duplicate it.

Just so I understand, this is a group of a shape (with a label), a dashed line, and another shape on the line (no label). Is that correct?

It’s from a stencil — is there a reasonable way to see what each component of the stencil object is made from?

You can use the Sidebar (I usually use the Layers tab) to select each item and check in the Inspector for their properties (Object and Properties tabs).

Does that make sense?

I mean, that’s roughly what it looks like to me, but … the information in the sidebar isn’t super-precise for that kind of analysis.

The “Class Role” object seems to be a group, and within it looks like a labeled box, a box and a line? Although the line looks like a dashed curve instead of the straight lines that the connectors I added myself look like, not sure what meaning that has:

The inspector seems to support that:

Maybe one hint is that Activation box, if I try to drag it around, only moves around on the line, much like if you attach a label to a line. I don’t know how I’d attach a rectangle to a line like that, but perhaps that’s why it’s not growing when I expand the group. If so, it might just be that there’s a special way in which objects attached to lines behave and it might not be useful in the general case?

It’s not just a label with no text, though – it has drag handles on all eight sides, whereas a label only seems to get two for the width.

I was able to duplicate the behavior!

I created a top square shape. Added a line descending from the box. To that line, I added a label and changed the Stroke from “No Stroke” to “Single Stroke.”