SIngle Actions in a Folder WIthout Associated Project?

Is it possible to have single actions in a folder without being associated with a project (sequential, parallel, single action list), and possibly also intermingled with projects in the same folder?

I’m pretty sure the answer is no, and that all actions must be within a project. However, I thought I would ask.

If this isn’t possible, I’d like to suggest it as something to consider in the future. (The “Projects” view could be changed to something like “Folders” view, and a new icon could be made to differentiate single actions from the projects.) Has this been suggested before?

Not possible as actions but possible if you simply add the actions as projects with no tasks and then set the preferences to show projects in your perspectives.

In my setup, I have folders for different areas of my life like this:

All of my single actions (one-off tasks) are conveniently placed in the single action list for each folder. Then my work projects are also grouped in the folder.

The purpose of the Single Action List is to group them all together so that they don’t float around.

But you can do as teronel states and have an empty project inside each of folder. Then you can set the status to completed to check it off.

set the preferences to show projects in your perspectives.

Do you mean check the box “Include projects and groups” in Preferences>Organization? Like this: 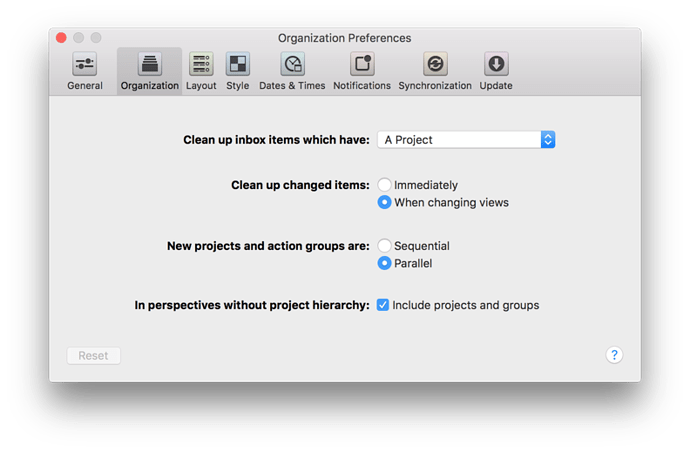 I have set my folders up to match the folder structure on my computer, so I have a lot of folders. In some folders I just have one single action. So I don’t want to make a separate single action list for each folder.

I think I’ll just do what teronel suggested and enter the single actions as projects. I’ll set the project type to single action list so I have a different icon for them. The only problem is that it seems it isn’t possible to sort by project type within a folder, I would have to do it manually.

Yes. Thanks for looking up the exact setting.

If you just have on single action in a folder, why have a folder in the first place? That folder might be a dormant area of your life that has received little attention. I would’ve put that one single action into a Miscellaneous Single Actions List and not worry about that folder.

I can always create that folder later when it actually becomes meaningful.

For me the beauty of folders is to allow the association of that folder within custom perspectives, that way if I add a project or list the perspective pick that up, without folders new things can fall through the cracks very easily.