I am using OmniPlan for the first time. I apologize if this is a poor question, but I’m not seeing an obvious answer and haven’t found what I’m looking for in the documentation.

I’m working on a project for work, and want to provide my director an accurate timeline of how long the project will take. I started by simply making a list of tasks to complete. Then I organized several of those tasks into groups that identify a particular effort.

Most of the tasks could be completely independently with more resources assigned, but I’m currently the only person. So I found quickly that I can manually map prerequisites and dependencies between them (and for many of the tasks, this is needed).

However, most of the tasks could be completed in parallel with more people working on it; the tasks aren’t actually dependent on each other. So rather than mapping dependencies between them to ‘push out the timeline’ based on the fact that I can’t work on all the tasks at the same time, I read in the manual about resources. So; I created myself as a resource and allocated myself as a resource to all the tasks; however the timeline still isn’t compensating for the fact that I’m the only resource available and can’t work on multiple things at once.

Any idea or suggestions?

I’ve attached the following picture from an example to show what I’m talking about. The resource ‘John Smith’ is assigned to Task 1, Task 2, and Task 3 (which contains two subtasks). He can’t work on all of them at the same time, however they are still occurring at the same time on the chart.

Without making them dependent on each other (they aren’t), how do I make the chart correctly display how long will be taken, without creating artificial dependencies? 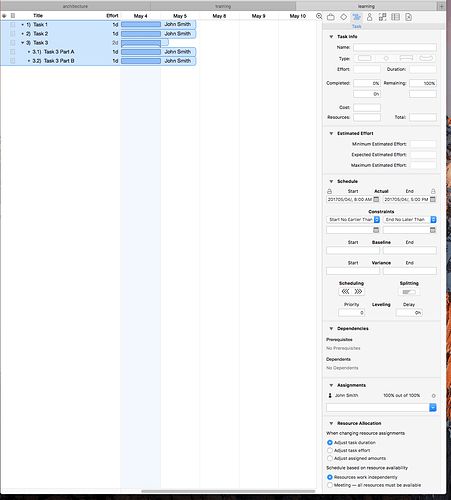 @nfarrar It sounds like you need to level your project! This can be done via the “level” button in the toolbar or via Project > Level Resources… in the OmniPlan menu bar.